NCAA tournament: All of the best from Round of 32 Big Ten games 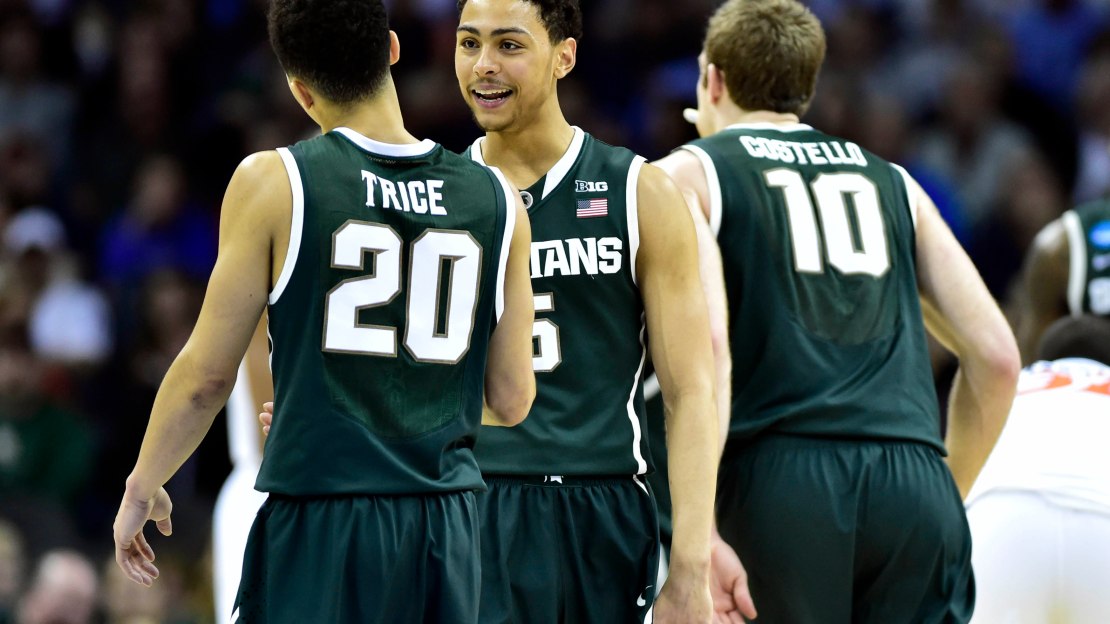 Regular Sweet 16 participants Michigan State and Wisconsin are off to NCAA regional semifinals yet again.

The Spartans downed Virginia, 60-54, Sunday to move on to their fourth consecutive Sweet 16, while the Badgers held off Oregon, 72-65, to advance to their fourth Sweet 16 in the past five seasons.

Get my best of the Big Ten from the Round of 32 below.

Top player: Travis Trice, Michigan State. The senior exploded for 13 points in the opening minutes to lead Michigan State to an early 15-4 lead. He finished with a game-high 23 points, to go along with two rebounds, three assists, one steal and just one turnover.

Top surprise: Arizona shutting down D'Angelo Russell. Ohio State's prized freshman has had his so-so shooting games, but he's never encountered the struggles he did vs. the Wildcats, going for 3-of-19 from the field (16 percent). Here's Russell's take on his rough night: "I would say they played great D on a few of them, but a lot of them were great shots. I just missed."

Top dunk: Jarrod Uthoff vs. Gonzaga. Uthoff, from just beyond the 3-point line, gave an eyebrow fake, drove the lane and elevated for a one-handed poster dunk. Watch it below.

Top stat: 13 of first 15 points. Travis Trice, typically known as the Spartans' closer, scored 13 early points to help Michigan State jump out to a 15-4 lead over Virginia in the opening five-plus minutes. Trice finished with 23 points.

Top quote: Nothing wrong with being honest. Right, Sam Dekker?

"I was trash in the first half, I've got to be honest." - #Badgers Sam Dekker, in postgame interview. #MarchOnBTN pic.twitter.com/7bwWtrXPBG

So proud + it's been such a blessing to wear the Iowa uniform! Thank you to ALL who have made these 4 years the most amazing of my life!

Top quip: Frank Kaminsky flexed his muscles after a big play in the second half vs. Oregon, and fellow veteran Josh Gasser had this great zing about it.

Josh Gasser cracking jokes in locker room. I asked if he saw Frank flex to the crowd after that putback. His response: "With what?" #Badgers

You see this? It didn't count, but watch the ball, somehow, go through the basket twice on this Sam Dekker play. Not sure we'll see this happen again!

@samdek1 did you see your alley oop that didn't count went through the hoop twice?!? https://t.co/AAZG94soLY

You see this, Part II? Former Michigan State standout and current NBA star Draymond Green sent a tweet to Travis Trice before Sunday's game, and it must have sparked the Spartans' guard, who scored a game-high 23 points. Keep the texts coming, Draymond!

Draymond Green texted Trice this AM: "Don't let this be your last game" "I won't" Trice said he texted back

You hear this? Travis Trice's mom likes to do her part to get in the opponent's head during free throws. So much so, she lets out a high-pitched noise. Tip: Turn down the volume on your computer here.

Celebrity sighting: When Magic talks basketball, you listen. Look at all of the Spartans all ears in the locker room!