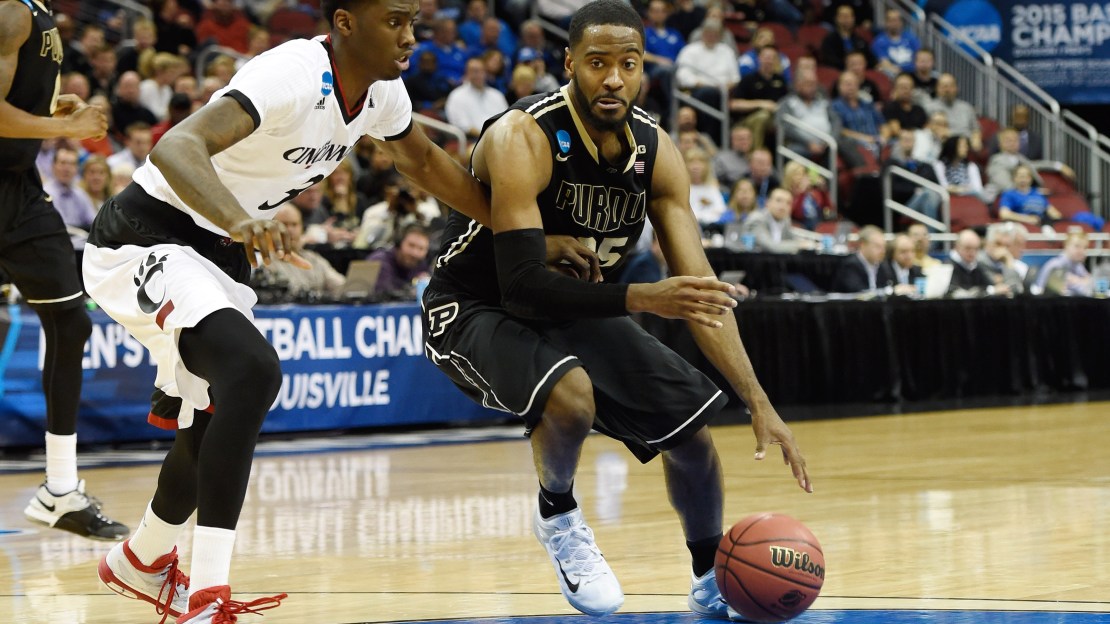 HIGHLIGHT: Beautiful dish and slam by the Boilermakers! http://t.co/gANBeaU0WE

A.J. Hammons scored a team-high 17 points, but it wasn't enough as Cincinnati snapped the Boilermakers' 14-game winning streak in NCAA Tournament openers with a 66-65 win Thursday night in the second round of the NCAA Tournament.

The star: A.J. Hammons played well, scoring 17 points with 10 rebounds, two assists and a block. The junior hit 7-of-10 shots. At that rate, he should have been fed the ball more often. He only shot four free throws. Instead, Purdue time and again curiously tossed up 3-pointers despite showing no propensity for sinking them, hitting 4-of-26 (15.4 percent). At one point, Purdue was 1-for-18 from 3-point range. Still, the Boilers bombed away.

The stat: Purdue dominated the glass, holding a 51-38 edge on the boards. But the horrendous long-range shooting doomed the Boilers. Kendall Stephens was 1-of-8 from 3-point land. Dakota Mathias was 1-of-5. Horrid free-throw shooting also was killer, as the Boilermakers hit 9-of-15 (60 percent).

The key to victory: Cincinnati never really did much well, but it showed tenacity after falling behind seven points with less than a minute left. UC attacked the basketball and hit some clutch free throws while winning the turnover battle, 12-9. UC rose to the occasion. Purdue buckled.

It was over when: After Purdue guard P.J. Thompson chucked up an air ball from 3-point land, Cincinnati raced to the other end for a layup to take a 66-63 lead with 30 seconds left in OT. Purdue scored a layup to make it 66-65 with nine seconds left. After a missed UC free throw, the Boilermakers had one last chance, but Vince Edwards? jumper missed. Game over. Purdue is gonna hurt for a while after this one. It looked like the Boilers had the game on ice. After Jon Octeus hit two free throws, Purdue led 56-49 with 48 seconds left. With a seven-point lead, the Boilermakers looked to be in good control. But the Bearcats roared back with six points in less than 10 seconds. Purdue clung to a 58-57 edge when Octeus missed a free throw, giving UC the ball with a chance to take the lead with 25 second left. But Cincinnati committed a turnover and Octeus was fouled and hit just 1-of-2 free throws. That gave the Bearcats a chance to tie the game with 7.4 second left. And UC did just that, as Troy Caupain hit a driving lay-up with 0.1 seconds left. Overtime.

What?s next: The season is over for Purdue, which lost four of its last six games. Still, the season was a success, as the Boilermakers finished 21-13 after many projected a second-division finish. Was this A.J. Hammons last game? The junior may turn pro. Jon Octeus is gone. If Matt Painter loses both players, he will have some huge holes to fill next season.