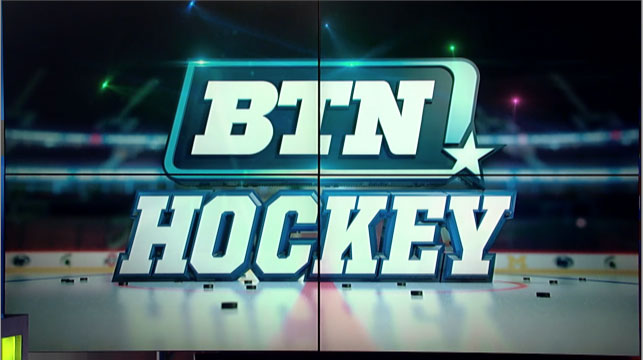 Remember: All 2015 Big Ten Men?s Ice Hockey Tournament games air live on BTN TV and BTN2Go from the Joe Louis Arena in Detroit, Michigan. Below are the BTN2Go links for all five tournament games. Not familiar with BTN2Go? Now's a great time to learn. It's free and it's very handy. BTN2Go is the digital extension of the Big Ten Network, delivering live games and on-demand programming to Big Ten Network customers via the web, smartphones, and tablets.

Learn more about BTN2Go and the get our free iOs and Android apps here.

How to watch: Thursday?s game airs live on BTN and BTN2GO.

The Latest on the Nittany Lions: Penn State head coach Guy Gadowsky earned Big Ten Coach of the year after guiding the Nittany Lions to their first winning season in their third year in Division 1. Penn State enters the 2015 Big Ten Tournament with a 2-4 record in their last three Big Ten series.

The latest on the Buckeyes: Ohio State leads the season series with Penn State, 3-1-0. The Buckeyes have a full, healthy roster and are 6-3-1 in their past 10 games since many key members of their team have returned from injury. In last year?s inaugural tournament, Ohio State, the No. 4 seed advanced to the title game before falling to No. 2 Wisconsin, 5-4 in overtime.

How to watch: Thursday?s game airs live on BTN and BTN2GO.

Players to watch: Michigan?s senior forward Zach Hyman led the league with 49 points and was named the Big Ten Scoring Champion. Wisconsin?s senior goaltender Joel Rumpel is nearing the end of his career and ranks fourth in UW goaltender history, averaging over 31 saves per game.

The latest on the Wolverines: Michigan swept the regular-season series against the Badgers 4-0-0 and are unbeaten in their last six games against Wisconsin (5-0-1).

How to watch: Friday?s game airs live on BTN and on BTN2GO.

Players to watch: Minnesota?s Mike Reilly earned Big Ten Defensive Player of the Year and First Team All-Big Ten honors for the second-straight season. He leads all NCAA defensemen this season with 42 points.

The latest on the Gophers: Minnesota earned a first-round bye in the Big Ten Tournament as the No. 1 seed after taking home its fourth-straight regular season conference title. Gopher head coach Don Lucia set a new program record with his 391st win against Ohio State on Mar. 6.

In summary: Although the Gophers have won back-to-back regular season Big Ten Titles, they have yet to capture the Big Ten Tournament hardware.

How to watch: Friday?s game airs live on BTN and on BTN2GO.

Players to watch: Michigan State?s junior goaltender Jake Hildebrand is one of the best goaltenders in the nation, as he?s led all goaltenders in the NCAA since Jan. 1 with a .950 save percentage. Hildebrand earned Big Ten Player of the Year, Goaltender of the year, and First Team All-Big Ten. He was also named a finalist for the Mike Richter Award, which is presented to the most outstanding goaltender in the country at the NCAA tournament Frozen Four.

In summary: There?s a potential epic rematch between Michigan and Michigan State, which would take place in both of their backyards at the Joe with a tournament title on the line on Friday night. If there?s one game to watch out for during this 2015 tournament, it would be this one.

Get more information at BigTen.org.

Earlier this week,  each of the six men's coaches talked to reporters for the tournament teleconference. Listen to each below