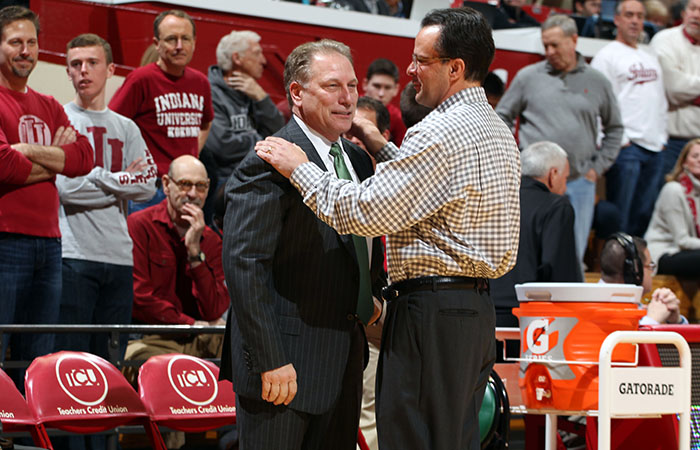 Michigan State is a trendy pick in the NCAA bracket, as Tom Izzo has his team peaking at the right time. Mlive.com has 18 tidbits from the Spartans? run of 18 consecutive trips to the Big Dance.

It?s fun to look ahead on the NCAA bracket and anticipate possible matchups. And Iowa has a good potential game down the pike. How about playing Iowa State in the Sweet 16? Yes, please.

One of the opening games I?m most looking forward to watching is No. 7 Wichita State vs. No. 10 Indiana. Great matchup and clash of styles, as the Shockers are great defenders and the Hoosiers excel on offense.

This will be a big challenge for IU. Wichita State advanced to the Final Four in 2013 and started last season 35-0 before losing to eventual national champion Kentucky in the round of 32. The Shockers won the MVC regular-season title this season, finishing 17-1 in conference play and 28-4 overall.

Doug Lesmerises of Cleveland.com has some predictions and polls for the Big Dance.

As a native of the great state of Indiana, I love this piece from IndyStar.com that looks at every player from the state who is playing in the NCAA tourney.

The Big Ten, to my surprise, has just one NIT team: Illinois. The Fighting Illini will open at Alabama, which just fired its coach.

Marcus Jackson of the Champaign News-Gazette points out that the last time these programs met was in the 1996 NIT, which turned out to be Lou Henson?s final game as the coach at Illinois. And keep an eye on this: The NIT will experiment with a 30-second shot clock during its games. The NCAA tournament will stick with the 35-second clock.

OK, this is kind of out there: The Sporting News wondered how teams would be seeded if college football had a 68-team tourney. Check out the bracket and find your team. Your team is in the bracket, right?

Speaking of brackets ? here is an all-academic bracket from InsideHigherEd.com. Really.

Here's how Inside Higher Ed's bracket works: to determine the winners, we first look to the Academic Progress Rate, the N.C.A.A.'s multiyear measure of a team's classroom performance. When two teams tie, we turn to the N.C.A.A.'s Graduation Success Rate, which measures the proportion of athletes on track to graduate within six years. In the event of a G.S.R. tie, we then turn to the Federal Graduation Rate, a slightly different formula that the government uses to track graduation rates.

The winner: Belmont. Surprised? I bet you are. I was.

The great Greg Pickel of Pennlive.com has five questions for the Penn State offense this spring, with drills opening on Friday.

The big key: The offensive line. The big key inside the big key: Find a left tackle. It could be Andrew Nelson, who played right tackle-among other slots–last season. Too often last year, QB Christian Hackenberg was running for his life. C?mon, big fellas. Time to develop.

Athlon Sports has a pre-spring ranking of the Big Ten?s top 15 players.