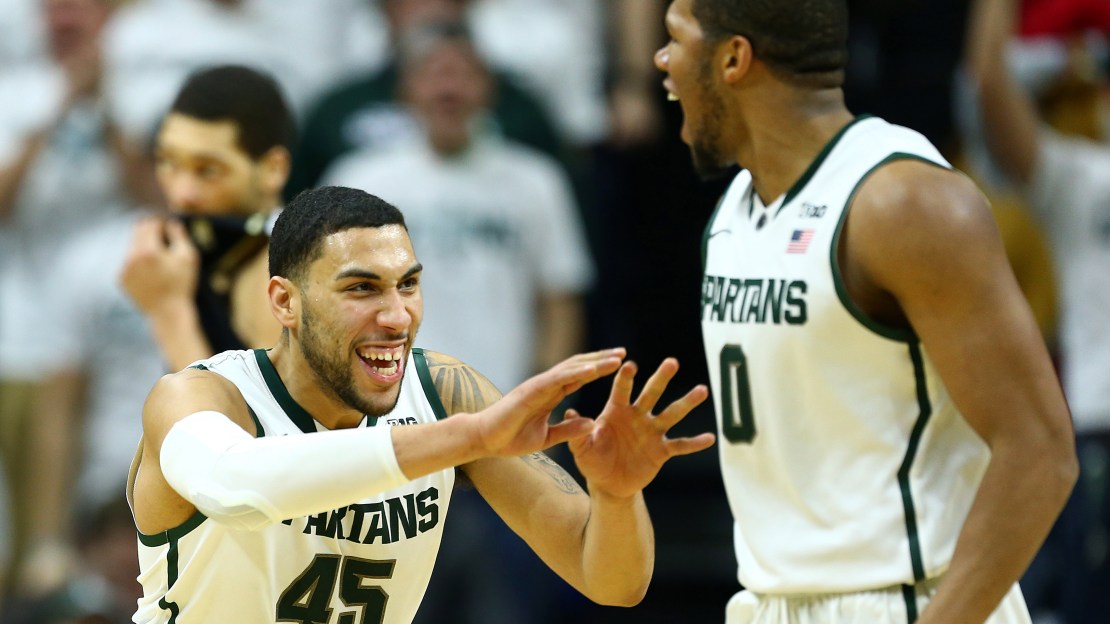 Time was ticking for the Spartans. A chance at playing for another Big Ten tournament title was looking less likely with everything minute that ticked off the clock. And then, just like that, everything changed.

MSU's senior duo of Travis Trice and Branden Dawson began to click. Nine points, seven, five, the Terps' once-commanding 16-point lead over Tom Izzo's club was slowly evaporating. But then came something that would set the tone for the remainder of the game Saturday.

With just under 14 minutes remaining, MSU freshman forward Marvin Clark Jr. caught a pass on the baseline, pump faked to get his defender up in the air, and then took two power dribbles and threw down a thunderous one-handed slam over Maryland's Evan Smotrycz, which brought the Spartans fans to their feet at the United Center.

Clark has had several jaw-dropping dunks in his first season, but this one was different than the others. This one was special because of the person who was in the crowd, the person who got to see Clark play for the first time in his college career: his mother.

To understand the story of why that play meant so much to Clark, rewind about 15 years back, growing up on the streets of Kansas City, Missouri. At the age of 3, Clark's father passed away in a car accident, leaving his mother to care for him as a single parent.

Donette Collins-Miller would have to work extra shifts just to be able to provide enough money to try and support her family. Clark, his mother and his siblings would often have to move from place to place in order to keep a roof over their heads. Clark can remember having to move school-to-school and meet new people all over again. In fact, he says he attended more than 10 different schools growing up.

When Clark enrolled at Michigan State, he went to East Lansing in search of a new start, and because he felt the most comfortable around Izzo.

His freshman year has been filled with plenty of ups and downs, but now, as MSU prepares to play its third game in three days and to defend its Big Ten tourney title, Clark is emerging for the Spartans.

His freshman season has been much like his life path, which brings us back to Saturday, and the moment when Clark threw down the memorable dunk, and looked over in the stands to see his biggest supporter.

"I screamed and immediately looked up in the stands to see her smiling at me," Clark said. "It was a special moment for me. It was emotional because she has never gotten the chance to see me play in a Spartan uniform."

Collins-Miller, who works as a registered nurse in Kansas City, was able to get some time off work and jumped at the idea of coming to Chicago to see Clark play when it was presented to her.

"I called her last week and asked her if she wanted to come to Chicago to see me play in the Big Ten tournament," Clark said. "She was so excited about it, and I was just so happy she's here and that I get to spend some time with her."

You can hear the emotion in Clark's voice when he talks about his mother and his up-bringing, but he is quick to point out the man who gave him the chance to come to East Lansing and fulfill his dream of playing college basketball: Tom Izzo.

"He's an unbelievable kid who has been through more than all of us combined," Izzo said. "When he came in and gave us that lift, that was a special moment."

Clark had been averaging just 1.8 points per game and playing just under eight minutes per game in Big Ten play heading into last week. However, an injury to Dawson in the second-to-last regular season game opened the door for more playing time, and he has taken full advantage.

Dawson sat out of Michigan State's regular season-finale against Indiana, and in his place, Clark scored 14 points and grabbed six rebounds in a season-high 28 minutes while helping lead the Spartans to a victory. Dawson has returned for the Big Ten tournament, but that hasn't slowed down the talented freshman forward.

"To get that kind of lift off the bench from Marv was huge for us," Dawson said following Saturday's win. "That dunk was nice. That was for his mom."

Today, Clark will get the chance to shine once again on the biggest stage he has played on in his young basketball career, in the Big Ten tourney final.

According to Clark, that is something he dreamed of growing up.

"Going from watching March Madness to actually being in it, it's crazy," Clark said. "This is what I came here for. This is what I dreamed of."

That dream is now a reality. And his No. 1 fan will be there in the stands to witness it.