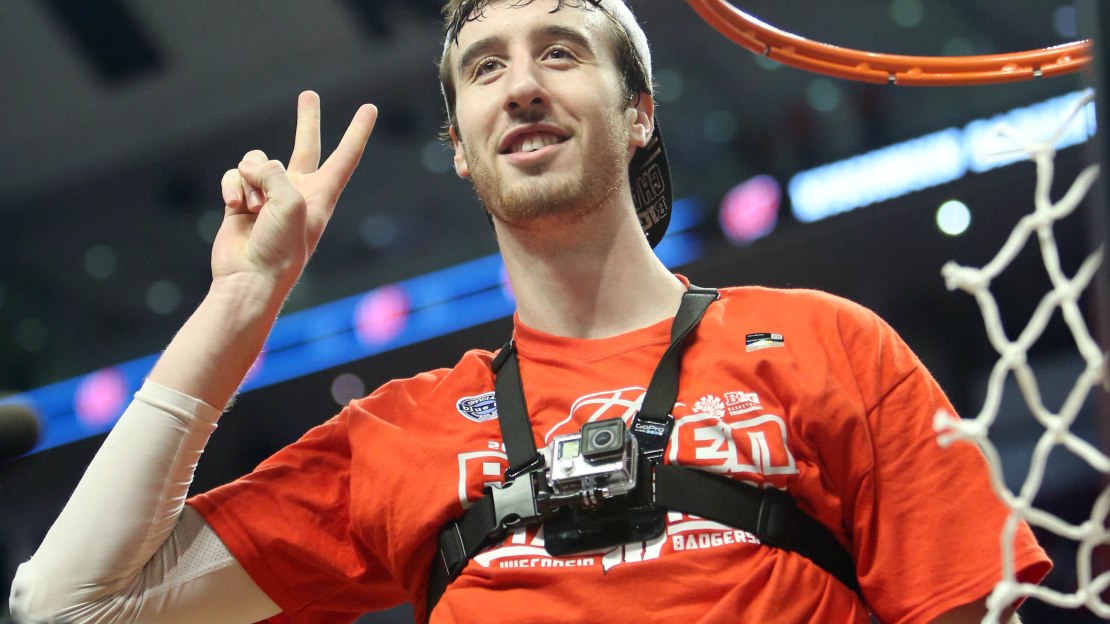 The 2015 NCAA Men's Basketball Tournament bracket was released Sunday night, and the Big Ten has seven teams dancing, tied for the most this year.

A season ago, the Badgers won the West Region. They could have to go through a couple repeat foes this year (No. 8 Oregon and No. 2 Arizona) if they're to make the Final Four again.

See all of the Big Ten matchups below.

(AP) A year after Indiana was shut out of the 68-team tournament field, the Hoosiers (20-13) were the biggest surprise of the five Indiana schools in the Midwest Region. Indiana's hopes were thought to be dangling on the bubble after a late-season collapse. Not the case, as it turns out, as the Hoosiers will face No. 7 Wichita State in their first game.

Iowa has earned the No. 7 seed in the NCAA South Region and will open play against No. 10 seed Davidson. The teams meet Friday in Seattle. Iowa (21-11) reached 20 wins for the third straight season. Senior forward Aaron White led the Hawkeyes in scoring (16 points) and rebounding (7.5).

(AP) After falling in the Big Ten Tournament semifinals, Maryland enters the NCAA Tournament as a No. 4 seed in the Midwest Regional and will open on Friday against 13th-seeded Valparaiso in Columbus, Ohio. The Terrapins (27-6) were second in the Big Ten during the regular season, finishing second to Wisconsin with a 14-4 league record.

Michigan State has earned an NCAA bid for the 18th straight year and was named a No. 7 seed in the East Region. The Spartans (23-11) will face No. 10 seed Georgia (21-11). The Spartans' streak of 18 consecutive tourney appearances ties the Big Ten record with Indiana (1986-2003) for the longest in conference history and is tied for the fourth longest in NCAA history.

(AP) Shaka Smart is bringing No. 7 seed Virginia Commonwealth back to the Pacific Northwest to face No. 10 seed Ohio State on Thursday in Portland, Oregon. The Buckeyes are dangerous because of D'Angelo Russell and his 19.3 points per game.

(AP) Purdue (21-12), which finished last in the Big Ten in 2013-14, wasn't supposed to be here. Coach Matt Painter revamped the roster, found the grittiness that typified his mentor's gritty style and turned things around. Now they'll face eighth-seeded Cincinnati in Louisville on Thursday. If the Boilermakers survive that one, they could be in line to end Kentucky's quest for the first perfect season since the 1975-76 Hoosiers.

(AP) Wisconsin earned the first No. 1 seed in program history and will face No. 16 Coastal Carolina on Friday in Omaha, Nebraska, to open its NCAA Tournament run. Led by Frank Kaminsky and Nigel Hayes, the Badgers (31-3) outscored Michigan 11-0 in overtime for an 80-69 victory in the Big Ten Tournament title game. They also won the regular season conference championship.