Michigan State vs. Wisconsin: 3 keys to victory for each team 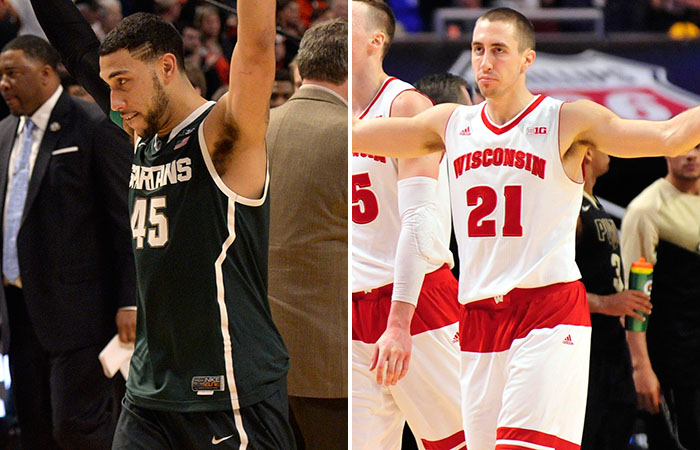 The Big Ten tournament title game is set, with No. 1 Wisconsin taking on No. 3 Michigan State.

The Spartans are aiming for their third title in four years and fifth overall. The program is 4-0 in Big Ten championship games. A win could vault Michigan State to a No. 6 seed in the NCAA tournament.

The stakes are higher for Wisconsin. A win on Sunday likely will land the Badgers a No. 1 seed in the NCAA tourney-and a ticket out of Kentucky?s bracket. The program last won a league tourney title in 2008. Wisconsin also won the championship in 2004, and it lost in 2005, 2007 and 2013.

Here is a look at three keys for each team:

1. Keep leaning on Bronson Koenig. The sophomore continues to impress in Traevon Jackson?s absence. Koenig notched a career-high 19 points in a 20-point win vs. Purdue. He has a sweet shot, and also can beat foes off the dribble with his underrated quickness.

2. Play team defense. This isn?t one of Bo Ryan?s best defensive teams-but it?s still strong. Especially when it plays as a unit, pacing the Big Ten in points allowed (55.9). But if those team-defensive principles break down and the Badgers get lulled into too many individual principles, they may be in trouble vs. a Michigan State team that has multiple offensive options and is playing well with wins in 11 of its last 13 games. Wisconsin?s defensive effort in the second half vs. Purdue was impressive, as the Badgers yielded just 16 points.

3. Give the ball to Frank Kaminsky. He wasn?t sharp on the offensive end vs. Purdue with just 12 points, but the Big Ten Player of the Year played great defense on Boiler big man A.J. Hammons to help spark the Badgers to victory. Kaminsky needs to be himself on the offensive end, working inside and outside. He had one of his best games of the season in the lone meeting between these teams, as erupted for 31 points on 11-of-17 shooting in a 68-61 victory in which the Badgers led by as many as 22 points back on March 1. The win allowed Wisconsin to clinch at least a share of the Big Ten regular-season crown.

1. Keep riding Branden Dawson. The senior is playing well since coming back from a concussion that caused him to miss almost two games. He has a combined 31 points and 16 rebounds in two Big Ten tourney games. Those have been his best two back-to-back efforts in almost a month. Dawson is dialed in, and he's impacting the game on both ends. Remember: He was the MVP of this event last year. He is motivated to go out on top in his last go-around. And he?s also motivated to play well vs. the Badgers, against whom Dawson didn?t start in the first meeting after his effort was criticized by Tom Izzo. Dawson finished with four points.

2. Hit free throws. No team in the nation fouls less than Wisconsin, and few teams are worse than Michigan State from the charity stripe (62.7 percent). So, the few times the Spartans get to the line, they must capitalize on the freebies. Wisconsin's two opponents (Michigan & Purdue) in the Big Ten tourney have attempted a total of eight free throws, but Michigan State boasts more playmakers than the teams the Badgers have faced.

3. Keep the bench alive. The Spartans are getting some nice production from reserves like Matt Costello and Marvin Clark Jr. The bench provided 17 points vs. Maryland and 15 vs. Ohio State. Wisconsin isn?t a deep team, so this depth of talent could prove advantageous down the stretch, especially when you consider this will be each team?s third game in three days.

What did Tom Izzo say to victorious @MSU_Basketball in the locker room today? Here you go! #MarchOnBTN http://t.co/JNfRTDa2yi