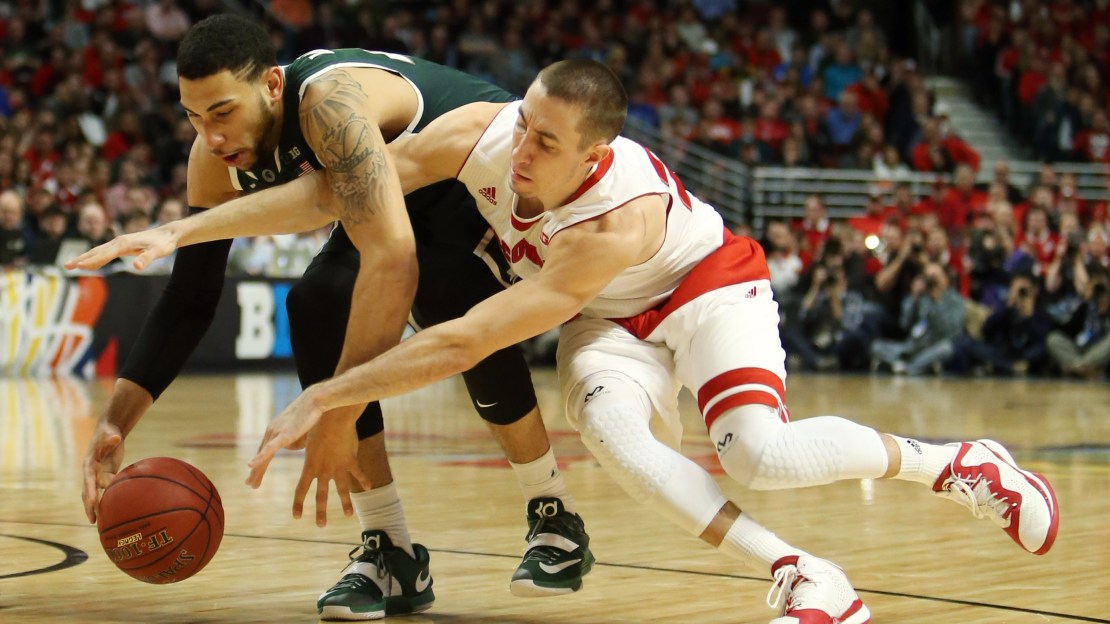 Top star: Frank Kaminsky is the Big Ten Player of the Year, but Nigel Hayes was the man today, tallying a game-high 25 points on 5-of-11 shooting. He also hit all 12 of his free throws with five rebounds, an assist and two steals. Take a bow, Nigel. You?ve earned it. And the win also means Wisconsin likely earned a No. 1 seed in the NCAA tourney.

Top stat: 0, Michigan State's points in overtime. Meanwhile, Wisconsin scored 11 points, the same number it trailed by in the second half before rallying to force overtime. The deficit tied Wisconsin's largest of the season (at Maryland).

Top stat line: Check out the cool Bronson Koenig. The super soph notched 18 points, hitting 5-of-10 shots overall and 4-of-8 from 3-point land. Some were very clutch, too, like his free throws that tied the game and forced overtime. Koenig also had four rebounds and nine assists. A star has been born, as Koenig took over for an injured Traevon Jackson in early January and excelled in leading UW to the regular-season and tourney title.

Top dunk: Branden Dawson had a nice two-hand flush to make it 17-17. But the reverse slam by Wisconsin?s Sam Dekker that made it 28-28 takes the cake. Such an athlete.

Stop us if you've heard this one before: Sam Dekker with the @BadgerMBB reverse dunk. #IntelGoesB1G #MarchOnBTN http://t.co/2DPFBZLkbo

The finisher: With Wisconsin reeling and down nine points, Sam Dekker made a lazy pass that Branden Dawson intercepted and quickly sprinted down court and dunked. The crowd went wild and MSU led, 57-46. But Wisconsin battle back, outscoring the Spartans, 23-12 to force overtime. That?s when the Badgers took over, outscoring MSU 11-0 in the extra session to earn Wisconsin?s first Big Ten tourney title since 2008.