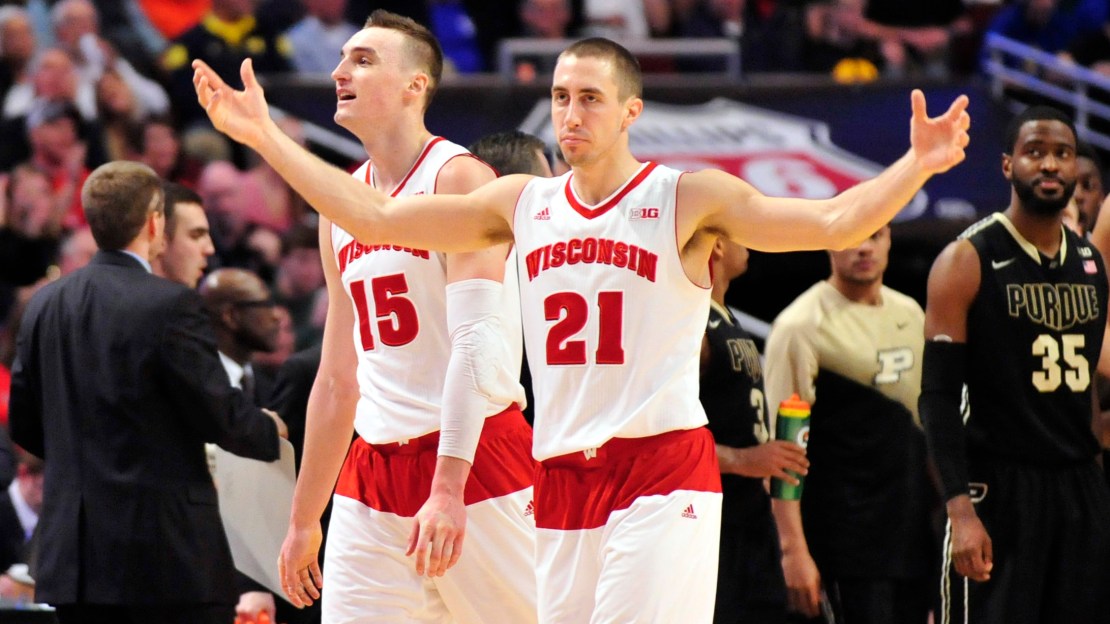 CHICAGO — March Madness is here, and Big Ten champion Wisconsin is in the thick of it all.

The Badgers put together a dominant second half en route to a 71-51 win over Purdue on Saturday in the Big Ten tournament semifinals.

With the likes of Duke and Virginia losing in the ACC tournament semifinals Friday, the chances of Wisconsin grabbing a No. 1 seed in the NCAA tournament seem to be getting more realistic by the day.

Will the Badgers get a coveted No. 1 seed? Of course, they first have to beat Michigan State in the Big Ten tourney finals.

I asked several Badgers following the team's win over Purdue about the possibility and how much it's on their minds.

Frank Kaminsky: "I think we've made our case, but that's up to the committee. We're just going to go out there tomorrow and play to the best of our ability and try to win a conference championship. We don't really talk about it. We're just happy to be in consideration for a No. 1 seed. If it happens, that's awesome, but if not, we're gonna go out there and play the same way."

Josh Gasser: "It's far back in the mind, maybe. But we have a chance to cut down some nets tomorrow and win a trophy. That should speak for itself. That's one of the goals we had set for ourselves from Day 1, and it's right here in front of us. We just have to go out there and take it."

Sam Dekker: "It's in the back of our mind a little bit. Seeing some good teams lose, and then us being one game away from a tournament championship and a conference sweep, that would be pretty hard to ignore for the committee. If we get a No. 2 seed, I'm not going to be too angry. If we get a No. 1 seed, I'll be happy and we'll go wherever we need to go. I think there's six or seven teams that could say they are a No. 1 seed."

Nigel Hayes: "Our fans would want us to have that No. 1 seed. As I've been saying, if you look at who the No. 1 or No. 2 seeds from last year were and how they ended up finishing, well, neither one of those top eight teams made the NCAA championship game. It really doesn't matter where you're seeded, it just matters how you play when the lights come on."

Zak Showalter: "I would like to be a No. 1 seed, but that's not really my job. I don't know all the BPI and RPI rankings. We would like to be one, but we'll see. It's not really in my mind at all. I think our coaches might think about it more than us, but we're just going out and playing every game and treating it like it's our last, just like we always have."