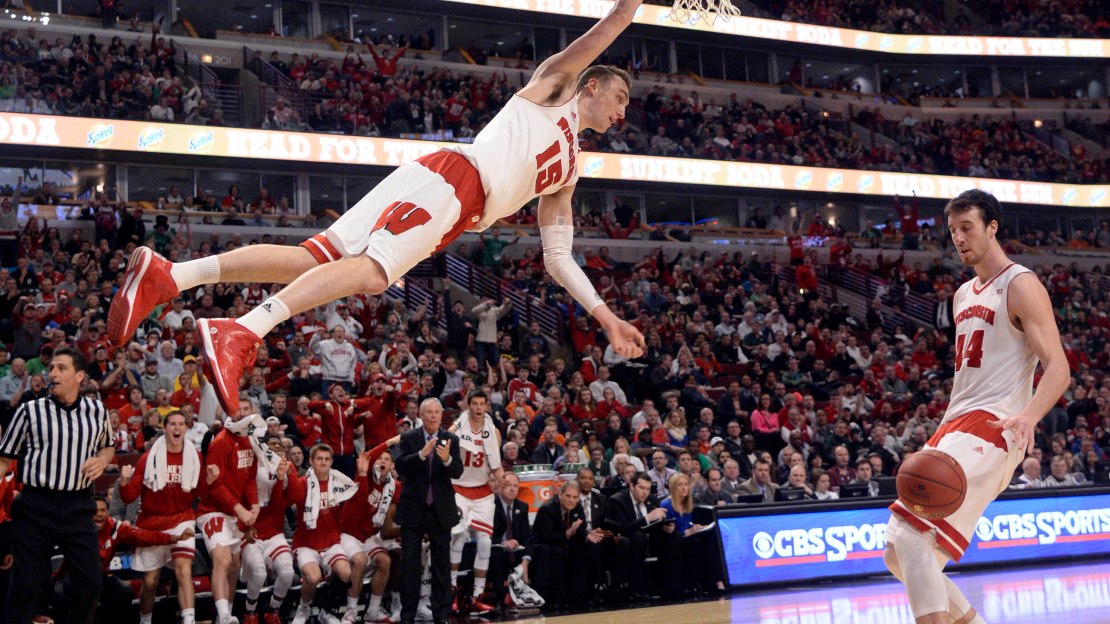 CHICAGO — It was a day of comebacks in the Big Ten tournament semifinals Saturday afternoon at the United Center.

No. 1-seed Wisconsin erased a five-point halftime deficit en route to downing No. 4-seed Purdue, 71-51, and No. 3-seed Michigan State rallied from 16 points down to dispatch No. 2-seed Maryland, 62-58.

Get BTN.com senior writer Tom Dienhart's Best of Day 4 at the Big Ten tourney below.

Biggest surprise: How about those Spartans? As the No. 3 seed, Michigan State knocked off No. 2 Maryland to advance to the Big Ten title game for the third time in four seasons. The Spartans are 4-0 all-time in the event, winning in 1999, 2000, 2012 and 2014. Tom Izzo?s crew has won 11 of its last 13 games and will be a dangerous foe for the Badgers. The teams met once this season, with Wisconsin winning 68-61 in Madison.

Biggest disappointment: Nothing too disappointing, but No. 2 Maryland?s inability to reach the title game is a bit of a letdown. The Terps had beaten the Spartans two times this season. After making eight of their first 12 field goals, the Terps proceeded to go 4-of-23 from the field. Maryland led 23-7 at the 11:17 mark in the first half before being outscored 33-13 to go down 40-36 with 11:58 to play.

Top player: Travis Trice, Michigan State. The Spartans don't rally from 16 points down without Trice, that's for sure. The clutch senior poured in 20 points, hitting 7-of-13 from the field, and added three rebounds and four assists.

Top stat line: Nigel Hayes is a do-it-all force for Wisconsin, showing his full fury of skills vs. Purdue. He had 15 points, six rebounds, five assists and two steals.

Top number: 16, second-half points allowed by Wisconsin. The Badgers sat on No. 4 Purdue, which led 35-30 at the half, limiting the Boilermakers to 24 percent shooting in a 71-51 win to advance to the championship game. Wisconsin played in the Big Ten title game in 2013 and won it in 2008.

Top play: As you know, Frank Kaminsky can do it all. You name it, the 7-footer does it. Lead the break? Sure. We've seen him do it before (who could forget this sequence?), and he did it again vs. Purdue. Kaminsky grabbed the rebound, perfectly led the break and delivered the pass that led to a Sam Dekker dunk. Watch it in the video at the top of this post.

Top dunk: Michigan State?s Marvin Clark Jr. roared in from the right corner along the baseline and threw down a thunderous one-handed dunk to cut Maryland?s lead to 36-35. That slam helped spark the Spartans-who missed their first nine shots of the game–to a win after trailing by as many as 16 points in the first half (11 in the second), helping MSU avenge two earlier losses to Maryland.

Put it on a poster! Marvin Clark Jr. goes strong to the rim on this @MSU_Basketball dunk. #IntelGoesB1G #MarchOnBTN http://t.co/ShlmTv0bve

Top picture: It was this kind of a second half for Sam Dekker and the Badgers.

Did you see this? The halftime entertainment during the Michigan State-Maryland game did not disappoint.

This happened at halftime, and it was fantastic! #MarchOnBTN pic.twitter.com/NHAJ5BhX2Q

?They have a lot of people that are good. They're very well coached, and I think it's great for the Big Ten that the two of us are playing. We've been in some epic wars over the years, and I know I'm excited about the chance to play them because we were kind of the dark horse.? – Michigan State coach Tom Izzo, on playing Wisconsin in the title game

"You know, I never really have talked about seeds ever, even in Division III when they first were talking about seeding and who's going to play where and whom and all that. I stay away from it because I want all my energies to go towards the game tomorrow, and then we find out who we play, and then all our energy is going into, boom, that first opponent." – Wisconsin coach Bo Ryan, on the importance of being an NCAA No. 1 seed vs. being a No. 2 seed

"Well, I don't know about the seeding because I don't know what all goes into it. But I think they have a chance to win a national championship, so I don't think there's a lot of people that can say that." – Purdue coach Matt Painter, on if Wisconsin should be a No. 1 seed

"When we're doing good on the defensive end, it makes the offense even more fun, because one thing leads to another. We have the guys who can get it done on both ends." – Wisconsin forward Sam Dekker, on Wisconsin's defense

Michigan State and Wisconsin will meet in the title game for the first time in Big Ten Tournament history. This is the fourth straight title game that features either the Spartans or Badgers.

Wisconsin (30-3) reached 30 wins for the fourth time and can match the school record for victories with a win in Sunday's final.

Of Wisconsin's 30 wins, 25 have come by double digits, including 14 of 18 against Big Ten competition.

With three blocked shots in the game Purdue tied its single-season record for blocked shots, giving it 176 on the season.

Purdue?s 16 second-half points is its fewest scored in a half this season.