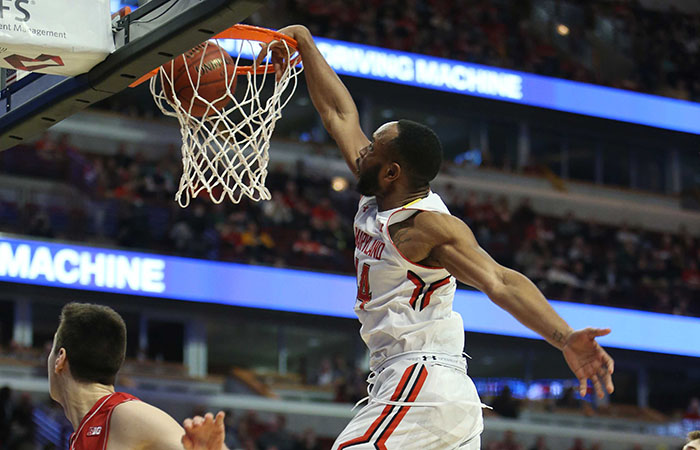 The Big Ten tournament quarterfinals are in the books, and we'll see the top four seeds in Saturday's semifinals.

Get our Best of Day 3 from the Big Ten tourney below.

Top player: Denzel Valentine, Michigan State. You name it, the star junior did it in Michigan State's rivalry win over Ohio State. Valentine was all over the court, and he flirted with a triple-double (23 points, eight rebounds, seven assists).

Another Big Ten star, Sam Dekker, was dishing at a high rate, tying a career-high with six assists in Wisconsin's win over Michigan.

Top stat line: Denzel Valentine, Michigan State. Got to go with Valentine again. He shot 9-of-14 (64 percent) from the field and finished with 23 points, eight rebounds, seven assists and three steals.

Top moment: This was touching, whether you're a Penn State fan or not. Coming out of the game for, perhaps, the last time in a Penn State uniform, the emotions and the reality of it all hit star D.J. Newbill. Check out his raw emotion in the video below.

Top picture: The class, the sportsmanship. It's easy to see why Purdue fans love Rapheal Davis.

Top dunk: It's between Wisconsin's Duje Dukan and Penn State's Ross Travis. Considering Dukan's drive and flush came in a win – the crossover was pretty sweet, as well – it gets the honor here. Here is Travis' dunk over A.J. Hammons.

Top sign: This, in a landslide. Hope you enjoy your first Big Ten tourney, Maryland!

Did you see this? Purdue's Rapheal Davis, the Big Ten Defensive Player of the Year, is all about hustle. He showed it again in Purdue's win over Penn State, when, attempting to save the ball from going out of bounds, he crashed into press row and landed on the walkway separating the first and second rows of media. Oh, by the way, yes, he saved the ball.

Top quote: Thad Matta has been the Ohio State coach since 2004. That being the case, this quote speaks volumes.

"This is, maybe, the most physical game I've ever coached in in the Big Ten" - Thad Matta #MarchOnBTN http://t.co/2WfeMXTRko

This is an honorable mention quote:

?I'm the luckiest guy in America. If you know anything about me, I've been lucky my whole life. If Ken Pom and his stats are saying I'm lucky, then he's right, so good for him. But we're good, too." – Maryland coach Mark Turgeon, on if he knew Ken Pom has Maryland as the luckiest team in the nation in his ratings.

Biggest surprise: No real surprises, as the higher-seeded teams all won today-No. 1 Wisconsin; No. 2 Maryland; No. 3 Michigan State; No. 4 Purdue. The bracket has held to form. If we have to pick one, how about Penn State? The No. 13 Nittany Lions played Purdue well, pushing the Boilermakers to the limit before finally succumbing. This was PSU?s third game in three days-and the fatigue showed.

Biggest disappointment: Difficult to call much we saw today as a ?disappointment.? Let?s go with Ohio State, which at times fell way behind Michigan State and couldn?t get over it. At one point, the Spartans lead was 16 points. OSU chipped away again but never could get over the hump.

With Friday?s win, the Boilermakers are 10-16 overall in Big Ten Tournament games and 5-6 in the quarterfinals. This is just the fifth game the Boilermakers have won at the United Center (5-8) and first win as a No. 4 seed (1-1).

Of Wisconsin?s 29 wins, 24 have come by double digits, including 12 of 16 Big Ten regular season wins.

The Badgers 29-3 record is the best start to a season in school history.

Yogi Ferrell hit 2-of-6 three-point attempts as part of his team-high 18 points. That makes 64-straight games with a three-point basket, the longest active streak in the nation.

The Boilermakers improved to 12-2 when Rapheal Davis and A.J. Hammons score in double figures.

Maryland is one of two teams in the Big Ten to have three players (Trimble, Wells and Layman) average more than 13 points per game.

Indiana was 7-of-24 from three-point range tonight, giving it 308 on this season. That is fifth on the Big Ten single-season list.