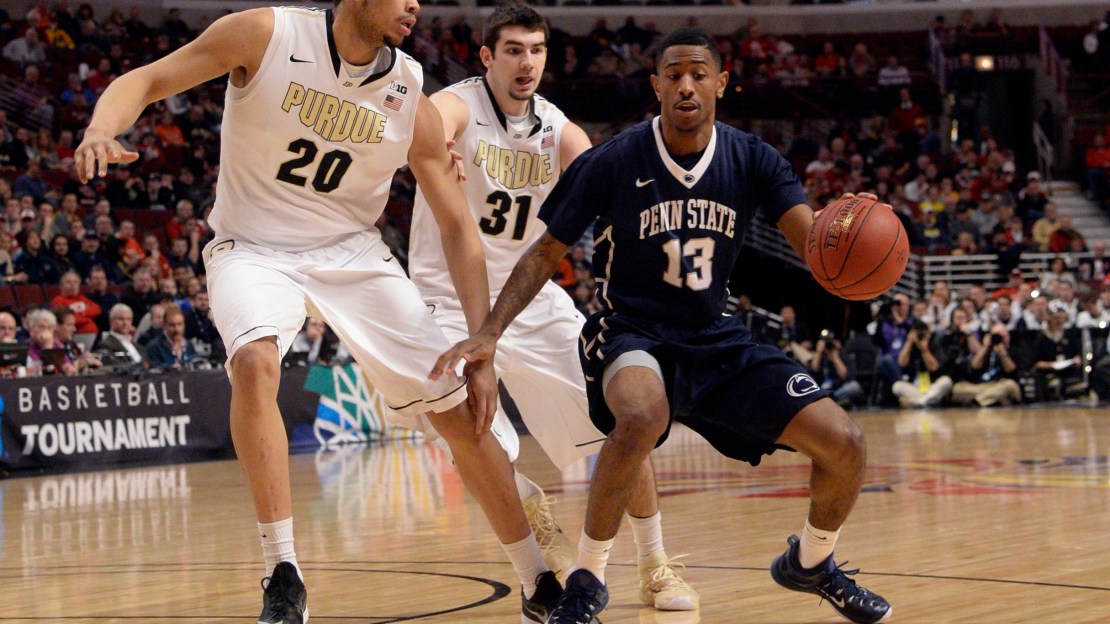 CHICAGO — No. 13-seed Penn State's Cinderella run in the Big Ten tourney came to a close in Friday's quarterfinals at the United Center.

No. 4-seed Purdue rallied and held off Penn State to record a 64-59 win and advance to the semifinals vs. No. 1-seed Wisconsin on Saturday.

Star player: Purdue big man A.J. Hammons played like an all-star. The 7-footer hit 7-of-10 shots (9-of-11 from the free-throw line) en route to notching a game-high 23 points. Wait, there?s more: Hammons added nine rebounds and four blocks in the win–plus a thunderous slam. Up next: No. 1 Wisconsin. Hammons vs. Frank Kaminsky. Gonna be fun.

Top stat: 22, second-half points for Penn State, which had 37 in the first half. The Nittany Lions had just 13 with 3:49 left in the game. Credit the Purdue defense. But the fact this was Penn State?s third game in three days also had to be a factor. The No. 13 Nittany Lions' Cinderella run ended after wins vs. No. 12 Nebraska and No. 5 Iowa.

Top stat line: A.J. Hammons, Purdue. As mentioned above, Hammons was a beast. The junior big man hit 7-of-10 shots, made 9-of-11 free throws and finished with a game-high 23 points, nine rebounds, four blocks and zero turnovers.

Top moment: Tip of the hat to Penn State?s D.J. Newbill, who bowed out with a respectable effort in his collegiate finale, finishing with a team-high 19 points, four rebounds and three assists. His exit, for probably the last time in his college career, was an emotional one, for him and fans watching on TV and in attendance at the United Center.

Top dunk: Two good ones-with a slam for each team. First, Penn State?s Ross Travis got the ball beyond the arc dribbled into the lane and went right at A.J. Hammons and slammed the ball through the hoop. Very impressive. Even better, the dunk gave Penn State a 32-25 lead with less than three minutes left in the first half. Upset brewing again?

Then, with around four minutes left, Purdue?s Dakota Mathias tossed a pretty lob to A.J. Hammons for a slam to give No. 4 Purdue a 55-50 lead. That monster mash seemed to spell the end for Penn State.

The finisher: Purdue trailed by as many as 11 points in the first half. And it was behind, 37-32, at the halftime. But the Boilermakers put on the defensive clamps in the final 20 minutes, as Penn State shot just 33.9 percent for the game and was beaten on the boards, 41-32, as time and again the Boilers got some big offensive boards in the game?s waning moments.

Did you see this? Big Ten Defensive Player of the Year Rapheal Davis, while trying to save the ball from going out of bounds, crashed into press row and landed on the floor. Check it out below.