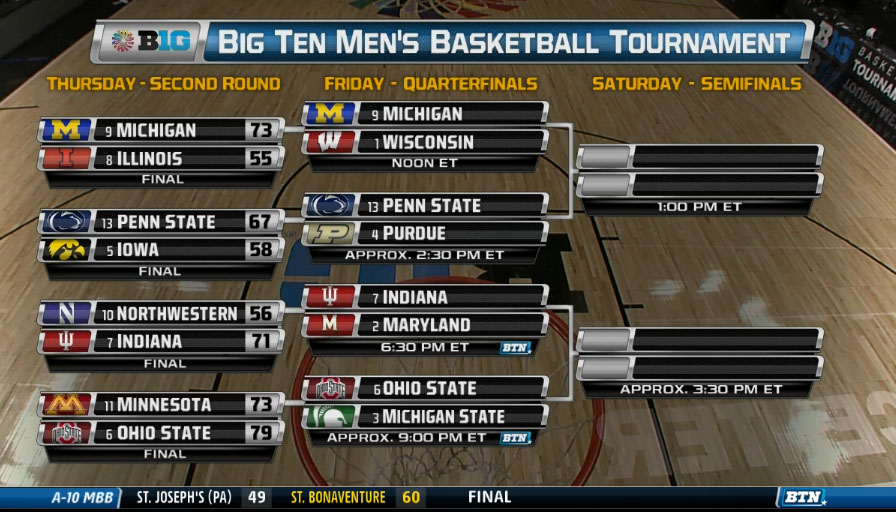 The latter two games are on BTN/BTN2Go, starting at 6:30 p.m. ET. Here's the link to watch Indiana-Maryland, and here's the link for Ohio State-Michigan State.

Get my Best of Day 2 below.

Biggest surprise: It?s Penn State. No one saw this coming. Pat Chambers keeps preaching ?Why not us?? Why not, indeed? The Nittany Lions have knocked off No. 12 Nebraska and No. 5 Iowa on the way to the quarterfinals. PSU has now won three in a row after a six-game losing skid. Also, there's this: Penn State won a total of three games in January and February, and it has won that same number in the last FIVE days.

Biggest disappointment: Take you pick between Illinois and Iowa. What happened? The Hawkeyes were rolling with a six-game winning streak, one of the hottest teams in the Big Ten. Alas, Iowa flopped as a No. 5 seed, falling to No. 13 Penn State. The Hawkeyes will still make the Big Dance, but their seed may take a bit of a hit. This loss has to cast some doubt in the mind of a team that struggled at the end of last season.

Illinois had more on the line than Iowa-but didn?t play like it. The Illini probably needed to win two games to make the tourney, but will now likely be headed to the NIT. If you are scoring at home John Groce has one NCAA appearance in three seasons. Illinois looked listless much of the night vs. Michigan.

Top moment: Watching the Penn State players celebrate an upset of No. 5 Iowa with the pep band. The No. 13 Nittany Lions are trying to recapture the magic of 2011, when they marched to the league title game as a No. 6 seed. No. 4 Purdue is next.

Top stat line: Indiana?s James Blackmon Jr. looked like a freshman All-American, tallying 25 points on 8-of-15 shooting (5-of-10 from 3-point range), a team-high six rebounds and a career-high seven assists.

Top play: Spike Albrecht's pass to Aubrey Dawkins, and it's not even close. The Michigan point guard delivered a highlight-reel no-look, behind-the-head pass to set up the white-hot freshman's dunk.

Top dunk: Late in the first half, Michigan?s Zak Irvin lobbed a pass to Aubrey Dawkins, who threw down a rim-rattling jam.

Did you see this? Why not us? It's a mantra Penn State has taken to recently, to the point that Patrick Chambers wrote the phrase on his whiteboard during a late timeout. Need proof? See below.

Chambers also did this, which was kind of cool.

"We can't control what the committee decides. We're just gonna look at the film, see what we can get better at." – Illinois? Rayvonte Rice, when asked about what comes next for Illinois

"We've been in too many games coming down to one possession, one stop, one rebound. We've learned from that. I think we're a different team than we are now. We're looking for a dogfight." – Penn State?s D.J. Newbill, after the win vs. Iowa

"I really don't know. No one knows, and that's the beauty of it all." – Indiana coach Tom Crean, on his team?s NCAA fate.

"That's a bad idea to talk trash to me." – D'Angelo Russell, to Stephen Bardo in our postgame interview

Illinois' starters shot a combined 13 of 45 in the loss to Michigan.

Ross Travis scored a season-high 17 points vs. Iowa, as Penn State has won three in a row since a six-game skid.

Michigan G Derrick Walton Jr., out since Jan. 24 because of a left foot injury, said he will play vs. Wisconsin. Michigan considered having him return against Illinois but decided to wait. The sophomore is averaging 10.7 points.

Iowa is 0-4 on neutral courts this season. It saw a six-game winning streak end.

Penn State?s D.J. Newbill has scored in double digits in 32 of 33 games this season.

The 19 points in the first half matched a season low for a half for Penn State, which went on to score 48 points in the second half.

Indiana?s Yogi Ferrell hit three 3-pointers to extend his school-record streak with at least one bomb to 63 games.

Thad Matta becomes Ohio State's all-time winningest coach with 298 wins. OSU players got him this jersey as a gift. pic.twitter.com/zmTieIlUat