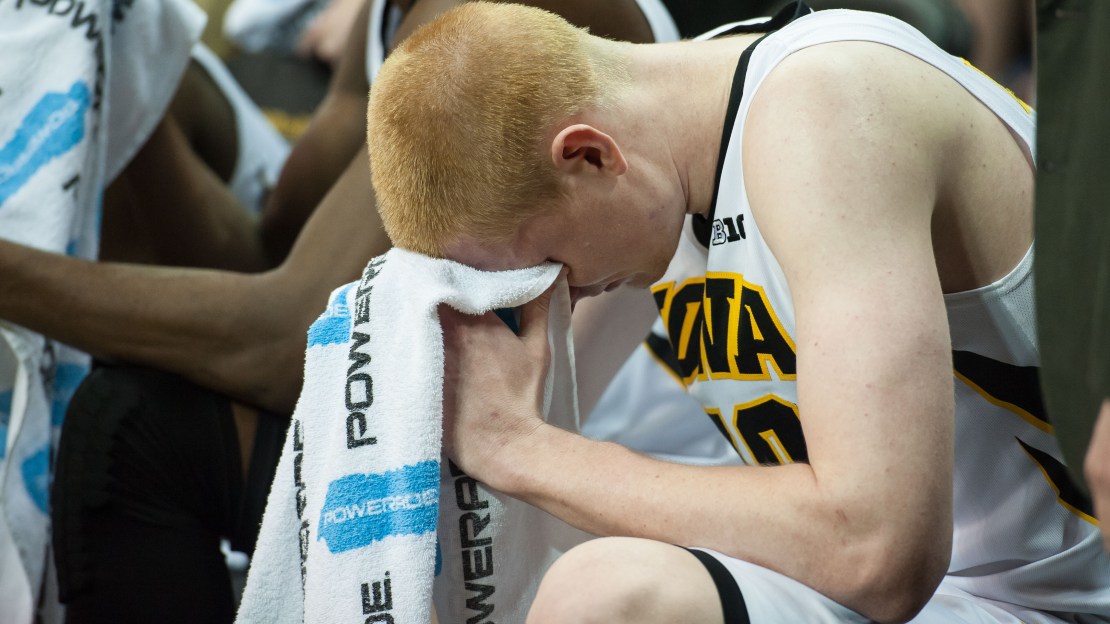 And just like that, the Big Ten regular season is over.

The final week provided plenty of dramatics, despite Wisconsin entering the week owning a share of the Big Ten crown. The Badgers wrapped up the outright title, their first since 2008, in Tuesday night's win at rival Minnesota.

Now, it's off to the Big Ten tourney, which starts Wednesday at the United Center.

Before we focus all of our attention on the tourney, here's my recap of the week that was.

Biggest surprise: Purdue. No one saw the Boilermakers finishing 12-6 in league action after a sluggish effort in the non-conference that included home losses to North Florida and Gardner-Webb. But Matt Painter?s team won its 20th game on Saturday and looks primed to end a two-season NCAA drought. The Boilers went 9-3 to finish the season. All three losses were on the road by a combined 14 points.

Biggest disappointment: Indiana. The slide continues for the Hoosiers, who have lost three in a row. Want more misery? The Hoosiers dropped their last three home games. Since opening Big Ten play 5-1, Indiana has gone 4-8, with two of the wins against last-place Rutgers, to finish 9-9 in league action. That seemingly has put IU squarely on the slippery-and dreaded-bubble.

Top stat line: D.J. Newbill, Penn State. The Big Ten?s top scorer was at it again in the season finale at Minnesota, scoring 31 points on 11-of-22 shooting (5-of-11 from 3-point range) with five boards, four assists and two steals-plus the game-winning 3-pointer in the dying seconds–in a 79-76 win. That ended a six-game losing skid for the Nittany Lions.

Top moment: Northwestern?s Tre Demps hit game-tying 3-pointers at the end of regulation and the first OT in a wild 82-79 double-overtime win vs. Michigan on Tuesday. The shots by Demps-who had 20 points–helped NU rally from a 12-point second-half deficit to notch the victory.

Another great moment: Iowa honored legend Roy Marble at halftime of Saturday's game vs. Northwestern, and it was a fantastic gesture. Keep fighting, Roy!

Top dunk: There were so many to choose from this week that it's almost not fair to go with just one. That being the case, I'm going with a three-way tie, between Illinois' Rayvonte Rice, Indiana's Hanner Mosquera-Perea and Maryland?s Dez Wells.

This one was just silly!

And this was one of Wells' several powerful dunks on the week. There was this one on Sunday night, too.

Top shot: It has to be D.J. Newbill's buzzer-beating game-winner at Minnesota, right? Right. Look at the hand in his face! So clutch.

Did you hear this? We all know Tom Izzo and Tom Crean are close friends. The latter served on the former's staff at Michigan State, and Izzo was in full-support mode for his good friend after beating his team Saturday afternoon. Check out what he said below.

Did you see this? Bet you've never seen a player hurdle the ballhandler and force a traveling violation. Well, Dez Wells did just that to Myles Mack in Maryland's road win at Rutgers. Check out the ups!

Another honoree: Sam Thompson scored in one of the most unconventional ways I've ever seen, and I'm not sure I'll see it again. Guarding the inbound pass at Penn State, Thompson jumped to deflect the ball, sending it straight up into the air and off the glass. Two points. Wild.

In case you missed this: Alex Olah knocked the shot clock down atop the basket with a dunk prior to Northwestern's game Saturday at Carver-Hawkeye Arena. No worries, the basket was lowered and the shot clock was fixed in plenty of time before the ball went up.

In another odd moment, the lights briefly went out at Crisler Center Saturday. Check it out here.

Stock up: Iowa continues to surge. Since the inexplicable two-game losing skid from Feb. 12-15-falling at home to Minnesota and at Northwestern-the Hawkeyes have ripped off six wins in a row. It?s the program?s first six-game Big Ten winning streak in 28 years.

Stock down: Illinois. The Fighting Illini were rolling along with a four-game winning streak on Feb. 12 that included a win at Michigan State. But since then, Illinois went 2-4 to finish the regular season and put itself on the bubble. The only wins in that stretch were in Champaign against Northwestern and Nebraska, neither of who has a sterling resume.

Dez Wells registered a pair of double-doubles, first a 20-point, 10-rebound effort at Rutgers, and then an 18-point, 12-rebound line at Nebraska to lead the Terps to their sixth and seventh straight wins.

D.J. Newbill pulled up and calmly swished a 3-pointer at the buzzer, giving him 31 points to lift Penn State to a 79-76 victory at Minnesota on Sunday.

Frank Kaminsky had 25 points on 10-for-15 shooting plus seven assists, and No. 6 Wisconsin became outright conference champions with a 76-63 victory at Minnesota on Thursday night.

Travis Trice equaled a career high with 27 points to help lift Michigan State to a 72-66 victory over Purdue on Wednesday night, and he scored 18 of his 21 points in the second half of a narrow win at Indiana on Saturday.

A.J. Hammons had 16 points and 10 rebounds, helping rally Purdue to a 63-58 victory against Illinois in Mackey Arena on Saturday.

Aubrey Dawkins scored a career-high 31 points to help lift Michigan to a 79-69 victory over Rutgers on Saturday.

Max Bielfeldt, on his Senior Day, racked up his first career double-double (14 points, 11 rebounds) in Michigan's win over Rutgers on Saturday.

Iowa?s win at Indiana on Tuesday was its seventh on the road this season and the first seventh true road win since the 1986-87 season.

Despite Indiana's shooting woes in a loss to Iowa on Tuesday, it still finished with 10 baskets from behind the arc and set a single-season record for most 3-pointers made in school history.

The win at Penn State on Wednesday put Thad Matta in a tie with Fred Taylor for all-time victories at Ohio State with 297 in 11 seasons with the Buckeyes.

Michigan State?s win over Purdue on Wednesday was its 20th of the season. The Spartans and Tom Izzo have won at least 20 games in 15 of the last 18 seasons.

With the win at Minnesota on Thursday, Wisconsin improved to 28-7 away from the Kohl Center over the last two seasons, the third-best winning percentage among the power conference teams.

Iowa?s Aaron White passed Acie Earl for the No. 2 spot on the school?s all-time scoring list on Saturday. White now has 1,793 points. He's also the only active player in the country with more than 1,700 points, 850 rebounds, 175 assists and 125 steals.

We have a feeling @IowaHoops star Aaron White won't forget this moment for a long, long time. http://t.co/zq31SQp2N3 #MarchOnBTN

Maryland picked up its 26th victory Sunday night at Nebraska, which marks the most regular-season wins in program history.

"There's no way I make enough money to do this, and I mean that kiddingly. I got overpaid today. I didn't do a very good job. I guess I look at it like I got outcoached, we got outplayed down the stretch. But we've been unlucky a lot this year and maybe luck came to our side for once." – Michigan State coach Tom Izzo, after a 74-72 win at Indiana on Saturday that had him re-thinking his strategy over the last 3 ½ minutes.

"Best duo in the country." – Dez Wells, on star freshman Melo Trimble and himself in BTN's postgame interview Sunday night.

"We have to keep winning. You watch the guys on TV, and they have 83 teams in. It doesn't work that way. When you are on the bubble, you just have to keep winning." – Purdue coach Matt Painter, when asked if he thought his team had punched its Big Dance ticket with a win vs. Illinois on Saturday

"We just fought tooth and nail. But Dez Wells took over the game. That's what really, really good players do." – Rutgers coach Eddie Jordan, on Maryland?s star, who had 20 points, 10 boards and six big points down the stretch to push the Terrapins to a win at Rutgers

"We lost so many games in a row. As soon as we got the taste of winning, guys felt so much better. Now, we just don't want to lose it." – Northwestern?s Alex Olah, after a double OT win vs. Michigan on Tuesday, which gave the Wildcats five wins in their last six games.

John Beilein, on fouling up three in the final seconds. Thoughts? #MarchOnBTN pic.twitter.com/Hx3Vy6zeUi

"He makes me a better coach. No doubt about it, we were struggling from the free-throw line. He started making shots and we started making free throws. He did a tremendous job of keeping his composure. He had a great pace about him." – Ohio State coach Thad Matta, on D?Angelo Russell, who had 28 points in a win at Penn State on Wednesday.

"He helped me build my program. My program wouldn't be as good as it is if it wasn't for Tom Crean. I mean that, I really do." – Tom Izzo, on friend, former assistant and Indiana coach Tom Crean

"That's about as impressive a team as I've seen." – Minnesota coach Richard Pitino, after his team lost to Wisconsin, 76-63, on Thursday