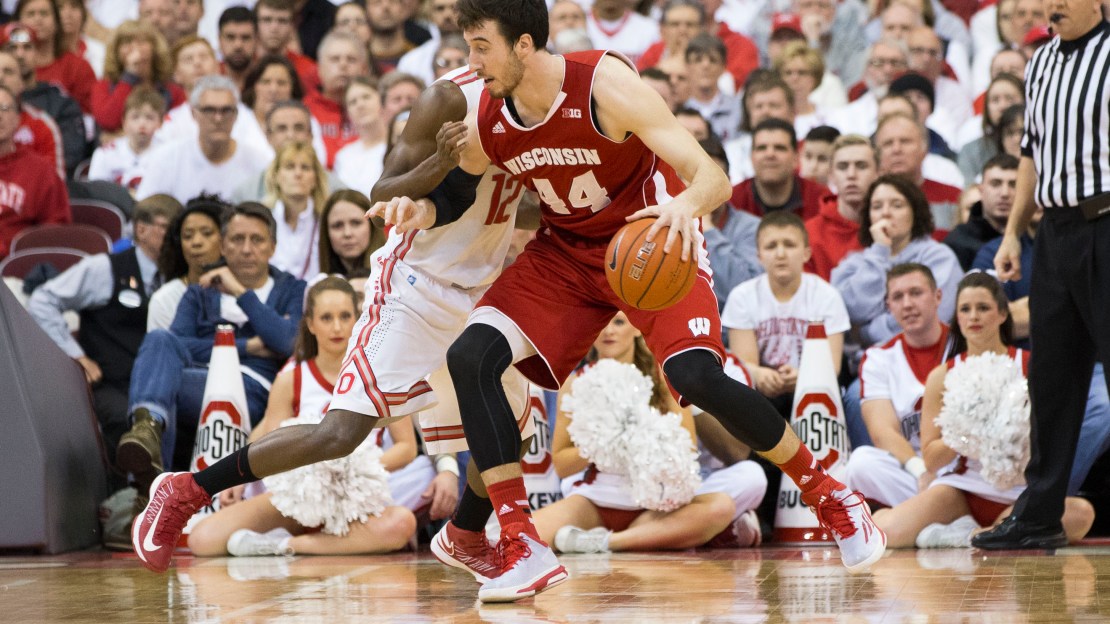 Check out the 10 players, in alphabetical order, below:

Branden Dawson, Michigan State. Just a week or so ago, it looked like the Spartans' double-double machine was a first-team lock. Dawson struggled down the stretch, though, and was injured in the second-to-last game, forcing him to miss the final 1.5 games. Still, he's the Big Ten's leading rebounder (9.3) and posted nine double-doubles, including eight in Big Ten play. – Tom Dienhart

Yogi Ferrell, Indiana. The diminutive Ferrell has been a one-man gang on occasion, showing the ability to take over a game. He?s a scoring point man who averages 15.8 points but also dishes to the tune of five assists per game. Ferrell puts the go-go in this free-wheeling Hoosier offense. – Tom Dienhart

A.J. Hammons, Purdue. Hammons, a top candidate for Big Ten Defensive Player of the Year, leads the conference with an eye-popping 2.9 blocks per game. In addition to his defensive prowess, he also leads the Boilermakers in scoring (11.3) and rebounding (6.3). This guy is the MVP of a team that finished last in the conference in 2014, and should be an NCAA Tournament team in 2015. – Sean Merriman

Frank Kaminsky, Wisconsin. Kaminksy may be the best player in the nation. Possessing a skill set that conjures images of Dirk Nowitzki, Kaminsky is a do-it-all 7-footer who tallies 18.1 points and 8.3 rebounds a game. Let?s call him one of the Big Ten?s best players in the last quarter century. Plus, he has an All-American nickname: ?Frank the Tank.? If colleges had statues of players, Wisconsin would commission one of Kaminsky. – Tom Dienhart

D.J. Newbill, Penn State. Yes, he plays on a team that has won just four conference games. But Newbill has been outstanding this season, leading the Big Ten in scoring (20.3). This kid gives teams fits with his ability to score both inside and outside. He?s one of the best players in the conference, and he probably doesn?t get the headlines he deserves. – Sean Merriman

D?Angelo Russell, Ohio State. One of the best freshmen in the conference in recent memory, Russell is a wizard out on the basketball court. The Buckeyes? do-it-all guard ranks second in the Big Ten in scoring (19.3 points), third in assists (5.3), sixth in steals (1.6), and first in 3-point shots made (83). He is a near-lock to be a top 5 pick in the 2015 NBA Draft, it he chooses to leave early. – Sean Merriman

Melo Trimble, Maryland. Yes, Ohio State?s D?Angelo Russell hogs the freshman hype-and rightly so. But in most any other year, Trimble would be the runaway winner for frosh of the year accolades. Check out his 16.1-point average. And the lead guard limits turnovers, too. – Tom Dienhart

Denzel Valentine, Michigan State. Valentine may be one of the most complete players in the Big Ten. He ranks in the top 12 in scoring (14.8), rebounding (6.1), assists (4.1) and 3-pointers made (80). He is the engine that makes this Michigan State team go. – Sean Merriman

Dez Wells, Maryland. Just pop in the tape (How is that for a dated reference?) of the game vs. Rutgers from Tuesday. That?s all you need to know about the sensational talents of Wells, who averages 15.2 points and five rebounds. – Tom Dienhart

Aaron White, Iowa. You can make a case for Aaron White being the best player in the Big Ten over the last 2-3 weeks of the season. He has averaged 21.2 points and 9.2 rebounds over the past six games, all of which have resulted in wins for Fran McCaffery?s surging team. – Sean Merriman