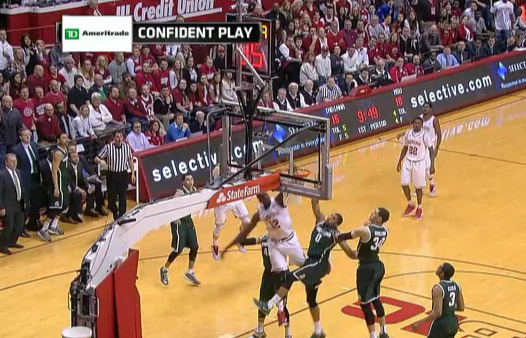 There have been some incredible dunks this season, but it's hard to say, without any shadow of doubt, that any bests the one we say Saturday at Assembly Hall.

Hanner Mosquera-Perea's high-flying putback, left-handed, mind you, was that good.

It was so good, in fact, former Indiana player and coach and current ESPN color commentator Dan Dakich said, "That's the best dunk I've seen, ever, at Assembly Hall."

It might be a little bit of hyperbole, but the dunk has to be in the conversation.

I mean, look at how high Mosquera-Perea got off the floor, and how extended he got his left arm, his off-arm, before throwing it down with tons of authority.

For what it's worth, there was this equally impressive dunk just last month at Assembly Hall.