Big Ten links: How is the NCAA tourney picture shaping up so far? 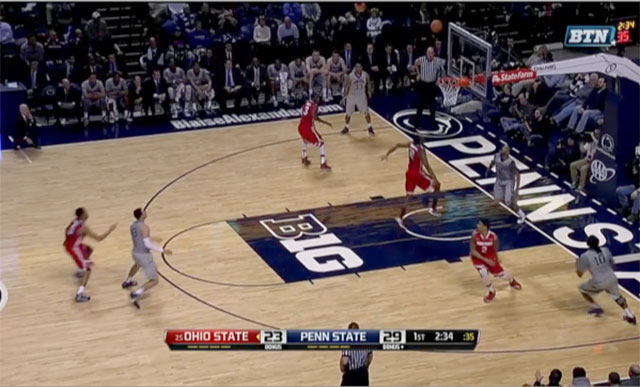 Yes, I think Michigan State punched its ticket to the Big Dance with that win vs. Purdue last night. And Graham Couch of the Lansing State Journal concurs. The Spartans needed this after dropping two in a row. Couch called it ?the power of desperation.? Perfect.

Couch says that no Big Ten team with MSU's profile has ever been left out since the field expanded to 68 teams.

"That was a gut-check," MSU coach Tom Izzo said, his team 20-10 on the season, 11-6 in the Big Ten. "That was a character-building game. And maybe it builds character for this team for the rest of the season. Maybe it builds character for them for the rest of their lives. But somewhere they're going to know that they can suck it up and get it done even when some things are stacked against them."

For Purdue, the loss at MSU puts its back to the wall.

Brian Neubert of Gold & Black Illustrated notes that a three-game losing streak heading into the Big Ten Tournament would probably be a mortal wound to Purdue's hopes to snap a two-year absence from the NCAA Tournament and would throw a bucket of cold water on a resurgent past two months. Yep. Sounds about right. BTW: Jerry Palm of CBSSports.com has Purdue as a No. 11 seed.

Illinois had to beat Nebraska last night. It just HAD to. Now, it?s on to Purdue this weekend for a HUGE game for both teams.

As I type this, Jerry Palm of CBSSports.com has Illinois in the Big Dance in a play-in game. So, you?d think a loss in West Lafayette would knock the Illini out. If Illinois loses to the Boilermakers, Palm tweeted to me that he thinks the Illini will need to ?Win it. Maybe less.? Well, I doubt Illinois would need to win the Big Ten tourney to earn a bid. But it probably would need at least a win-and maybe two.

It?s only March, but Michigan State QB Connor Cook already knows his goal for 2015: A Big Ten title. In fact, he says anything less will be a disappointment. Well, it?s gonna be tough with Ohio State?s muscle and mite getting bigger and better.

"When you win a championship and you win your conference, that's the most fulfilling feeling I've ever felt, in life, was beating Ohio State," Cook told Mike Griffith of Mlive.com.

"I think that's the standard and that's been the goal since coach Dantonio has been here."

Remember that New Jersey senator who was critical of his perceived commitment by Rutgers toward athletics? It seems he and the RU president may have reached a common ground.

"The issue is now framed," Sen. Raymond Lesniak wrote in an email obtained by NJ Advance Media. "Let's work together to make Rutgers athletics Big Ten ready and maximize both the financial and life enjoyment benefits for students, for Rutgers University and for Rutgers fans that can accrue from it."

"To the surprise of many, Deion was not invited to the Combine after making it to the RSB as a 4th year Junior graduate," Savage wrote. "NFL teams will want to work him out as both a DE and potential 3-4 OLB."

Nebraska kicks off spring football on March 7. And one of the most contested areas will be the trenches.

Brian Christopherson of the Lincoln Journal Star notes that three starters from last year are gone. There?s a new coach in Mike Cavanaugh. Left tackle Alex Lewis is the most experienced returning lineman, starting all 13 games in 2014. Next in line is the right tackle Sterup, with 10 starts. After that, the rest of the linemen have only a combined four starts - Givens Price (2), Ryne Reeves (1) and Dylan Utter (1). Lots of work to do.

Tom Oates of Madison.com says it?s vital for Wisconsin to earn a No. 1 seed in the NCAA tourney. Why? Because the Badgers need to avoid mighty Kentucky before the Final Four.

Oates thinks Wisconsin is probably ranked fifth overall, with Villanova just ahead of the Badgers and Gonzaga and Arizona just behind. To earn a No. 1, Wisconsin needs to win out-and have Villanova lose. If they both win out, the edge has to go to Villanova, as it plays in the best league in the nation.

If Jim Tressel says it, then it must be true. The ex-Ohio State boss says that Jim Harbaugh will bring something to ?The Game.? But Tressel thinks Harbaugh must win recruiting battles in Ohio. BTW: OSU is 13-2 in its last 15 meetings with Michigan.

"I think Jim Harbaugh will bring something to the Ohio State-Michigan storied rivalry," Tressel told the Akron Beacon Journal. "He's been successful wherever he's been. He's extremely hard-working. He has great pride in his alma mater.

"Personally, I think they're a ways away from being at the level where there's going to be a Ten Year War. I think they've got some work to do to get to that. But if anyone can do it, Jim Harbaugh can. He'll do a great job."

This is nice: Iowa is going to honor former Hawkeye Roy Marble on Saturday at Carver-Hawkeye Arena.

Marble, who is fighting cancer, scored 2,116 points from 1986-89 to make him the school?s all-time leading scorer. Marble is the only player in Iowa history to reach the 2,000-point plateau. I always enjoyed watching him on some terrific Hawkeye teams.

"I am thrilled that they're going to do that," Iowa coach Fran McCaffery said after beating Indiana 77-63 on Tuesday. "He's been very special to me since I got this job. From the minute I got this job, he's one of the first people I spoke to. And he's been a big supporter to me and our program. His son is like a son to me.?