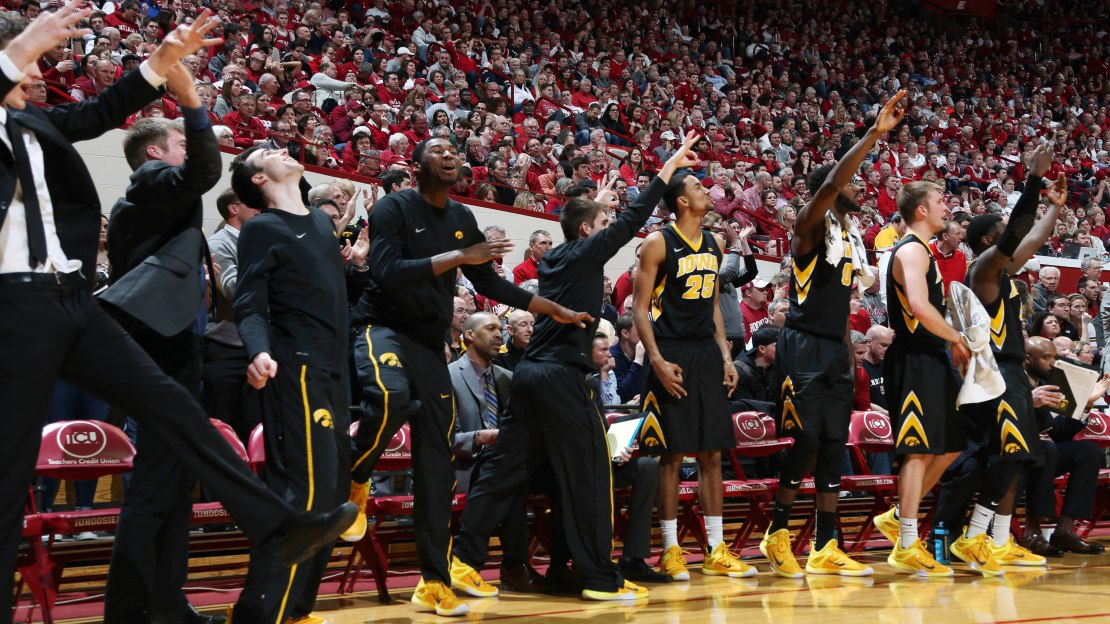 The lid has been taken off of spring football-which means the hype, analysis and anticipation for the 2015 season is blooming. And, that?s a good thing. Kevin Ryan of 247Sports.com takes a look at breakout Big Ten players for each team for 2015. Only two quarterbacks make this interesting list.

That home loss by Indiana to Iowa last night? It wasn?t good. Since the Hoosiers? four-game winning streak ended on Jan. 22, the team is 4-7. Is IU?s season on the brink? So, a 5-1 start to the Big Ten season has morphed into a sobering 9-8 reality. Michigan State comes to Bloomington on Saturday.

"I'm really just kind of concerned about the team," Indiana?s Tom Crean said after the loss, when asked if he could sense frustration from the fans. "That would be the most important thing to me."

The mood is different for Iowa, winners of five in a row and aiming for a double-bye in the Big Ten tourney.

I?ll admit, after those back-to-back losses to Minnesota at home and then at Northwestern, I wondered about the Hawkeyes. But they have responded with five victories in succession. Very impressive. Iowa has six Big Ten road victories for the first time in 28 years.

?Early in the season, I sensed something different about this team than last year,? Iowa junior forward Jarrod Uthoff said. ?Maybe it was how close we were.

?We?re a close-knit team. I think that shows on the floor, especially in road situations. That?s why we?re so good on the road.?

In case you missed it, Pete DiPrimio of the Fort Wayne News-Sentinel had a good look at Northwestern hoops and the revival process.

A recent four-game winning streak was the longest in Big Ten play since 1967. Don?t you get the feeling that Chris Collins is going to push NU to its first NCAA tourney at some point? Northwestern notched another win last night-and it was a crazy double-overtime dozy–so that?s five wins in the last six games for the Wildcats. Check out this video of the locker room celebration. Fun stuff!

Mike Carmin of JCOnline.com takes a look at the salaries for Purdue football assistants.

Purdue is paying its nine assistant coaches $2.245 million, which remains near or at the bottom of the Big Ten. OC John Shoop is the highest-paid assistant, hauling in $400K per year.

If Mike Griffith of Mlive.com types it, it must be true. His latest piece says MLB Riley Bullough is primed for a breakout season.

Michigan State co-defensive coordinator Mike Tressel said that Bullough's experience at the position puts him ahead of where converted outside linebacker Taiwan Jones was at this point a year ago.

"I'd say at that Mike linebacker spot, we are further ahead," Tressel said on the "Griff and Grinz Show" on Lansing's 92.1 FM The Team.? There's no doubt, Riley and (Jon) Reschke have been brought up throughout their careers as Mikes, and they understand why their role is and how they have to control the defense.

"There was a lot more adjusting for Taiwan."

Who is the most followed coach on Twitter? It?s Ohio State?s Urban Meyer. And, it?s not even close, as the Buckeye boss has 238,378 followers.

More amazing: Jim Harbaugh is No. 2 with 192,743 despite never coaching a game at Michigan. You think Harbaugh uses emojies? Nah. I wonder which Big Ten coach would be most likely to use them? I bet it would be Tim Beckman.

Some good video here of Northwestern coach Pat Fitzgerald talking about spring ball, which is underway in Evanston. Chief among the topics: The QB situation. And WR Christian Jones is coming back from injury. Bottom line: This is a big spring-and season-for the Wildcats, who are coming off consecutive bowl-less seasons.

File this under ?Oops.? It seems the 4-year-old son of Ohio State receivers coach Zach Smith accidently sent a text message to a recruit during a dead period, which is a minor NCAA violation.

No word yet on if Cleveland State will get two years of probation for this.