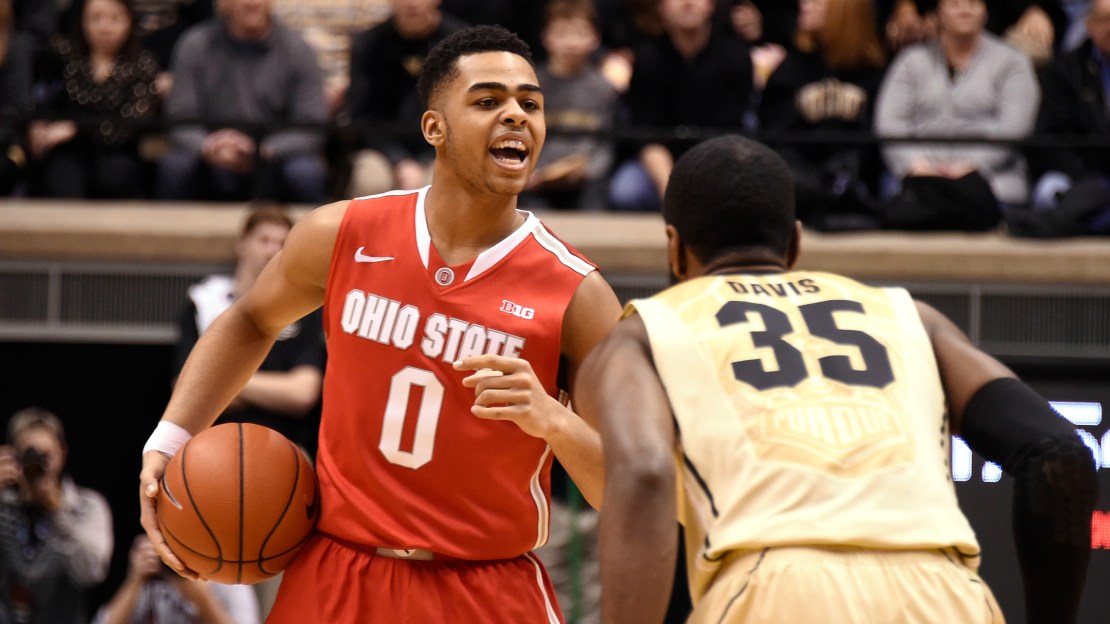 Ohio State?s D?Angelo Russell has been a revelation as a freshman. And the No. 23 Buckeyes have benefited, as they sit on the edge of an NCAA tourney bid.

Russell arrived in Columbus as the most touted incoming freshman in the Big Ten-and among the most hyped in the nation. And he hasn?t disappointed for the 21-8 Buckeyes, who are 10-6 in the Big Ten and slotted as a No. 8 seed by Jerry Palm of CBSSports.com and a No. 7 seed by Joe Lunardi of ESPN.com in recent mock brackets.

Russell ranks second in the Big Ten in scoring with a 19.0-point average, the highest average among all freshmen in the nation. The 6-5, 180-pound Louisville, Kentucky, native also averages 5.8 rebounds and 5.3 assists, as Russell arguably is enjoying one of the best freshman seasons in the Big Ten in over 20 years.

Ohio State plays at Penn State on Wednesday night and finishes the regular season at home on Sunday vs. first-place Wisconsin, which already has a share of the Big Ten title.

I caught up with Russell to get his thoughts on a variety of subjects.

Q: Do you model your game after anybody?
A: Steph Curry. He kinda blew up when he was in college. Before that, he wasn?t really on the radar. Once there, he made a lot of noise. I had a lot of noise coming into college, but no one really expected me to be this successful. But once it happened, it just happened.

Q: Who has been the best defender on you this year?
A: Sam Thompson and Shannon Scott. They have been great on me in practice, making me a better player. They don?t get enough attention for what they do to the best player on other teams. I get better going against those guys each day in practice.

Q: Who have been some of the better defenders against you from other teams?
A: Rapheal Davis of Purdue. I think I had 20 on him the first time we played, but it was a tough 20 (in a 60-58 loss in West Lafayette). He played great defense. The second time we played, I kinda knew what he was about. He tried to use his physicality to beat me. I sort of used it against him and was successful. He probably has been the only defender that has really done a great job against me.

Q: Do most teams try to get physical with you?
A: Usually, they try to be physical, when the refs are letting us play. But when I get physical, it?s usually a foul.

Q: Has anyone tried to talk trash to get you off your game?
A: Not really. I do a little myself to my team. I will talk some trash to my teammates if they are doing something exciting.

Q: Do you remember what Thad Matta?s reaction was when you committed to Ohio State?
A: He always told me it was between me, Tyus Jones, Phil Booth and some others. But he always told me that I was his guy. He would say ?I want you and I need you.? But it was up to me to make the decision. He said that Ohio State would be good regardless of my choice. But he said if picked OSU that we would be even better. He was excited once I told him I was coming. I don?t remember if he screamed or not. We were talking on the phone.

Q: What has been the craziest arena you have played in?
A: I would say Minnesota was a crazy environment. Michigan State, too.

Q: What has been the biggest shot you have hit in your career?
A: I never have been the guy to take that shot. But I would say Sunday was probably the biggest shot I ever took. It put us in the lead. It was a lay-up in crunch time (vs. Purdue, helping give OSU a 65-61 win). That probably was the biggest.

Q: Do you have a go-to move?
A: It depends on how the game is going. If my jumper if falling, I usually settle for that. But if it isn?t falling, I try to get to the rim.

Q: How deep can this team go in March?
A: I feel with have a great team. If we are underestimated, the better we will be. We will have a great chance.

Q: How much thought have you given to turning pro after this season?
A: Not a lot. Not at all. I am two feet into our season now. We want to make a big run in the tourney. So, I?m not thinking about that.