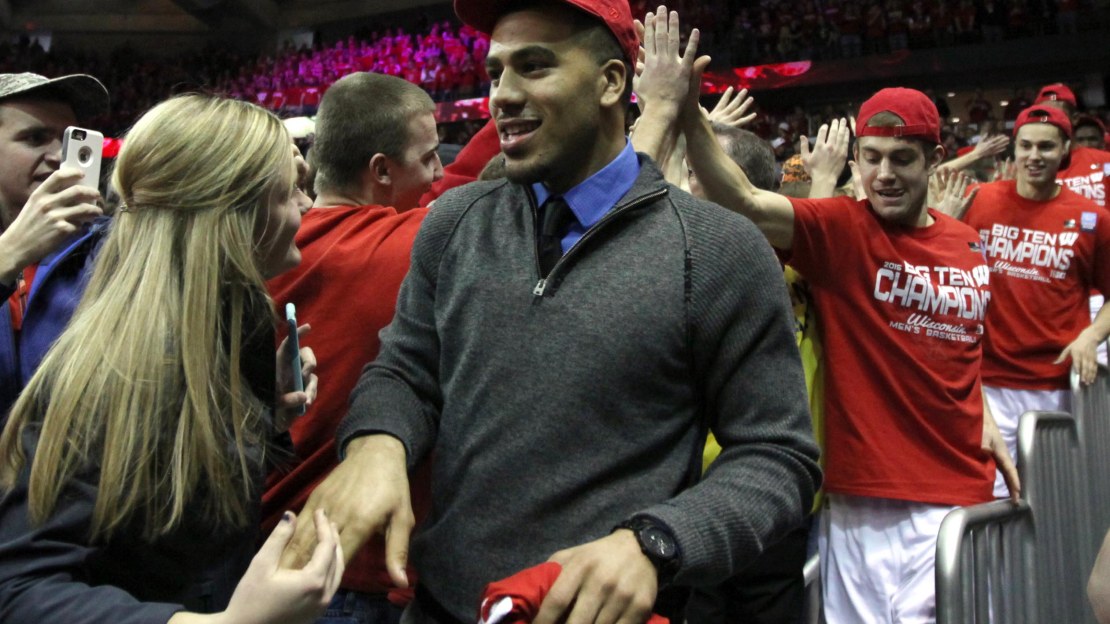 Oh-oh: Wisconsin senior point guard Traevon Jackson may not be back for the Big Ten tourney. But, the Badgers have been doing pretty well without him, going 11-1 in Jackson?s absence.

Bo Ryan was asked Monday during the Big Ten coaches teleconference if Jackson, who has been out since breaking his right foot in mid-January, had a chance to return for the conference tournament next week.

?That might be tough,? Ryan said. ?I can?t rule anything out because the coaches are the last to know anymore. His clearance may be two weeks, who knows??

Jackson has missed 12 games since injuring his foot during the second half of a 67-62 loss at Rutgers on Jan. 11. Last week, Jackson thought he?d be back in time for Senior Day. Didn?t happen.

The struggles of Nebraska are well-documented. Last year, Tim Miles? crew was the toast of the Big Ten, making a run to the program?s first NCAA tourney since 1998. This year? The pits. The Huskers are 13-15 overall and 5-11 in the Big Ten. Lee Barfknecht of Omaha.com wonders if it is a fluke or just a ripple.

Barfknecht notes that this has come from a team with seven of its top eight players back, including a first-team All-Big Ten pick and defending league scoring champion, plus an honorable mention all-league choice. Sadly, despite all the buttons third-year coach Miles has pushed, this is a team that acts like it has no plans to win again this season. (The Huskers remain indefinitely locked out of their dressing room and off limits to reporters, Miles said Sunday.)

All schools conduct Junior Days in the winter. It?s about getting prospects on campus, a key part of the recruiting process. Here is a nice look at the nuts and bolts of Penn State?s Junior Day operations.

Remember the sad story of former Minnesota QB Philip Nelson, who transferred to Rutgers? He pleaded guilty on Jan. 21, 2014, to fifth-degree assault, a misdemeanor that comes with a maximum of 90 days in jail and a $1,000 fine, for his role in the brawl at bar closing time in downtown Mankato. The incident left a man with serious brain injuries. Felony charges were dropped. Nelson won?t face jail time following court proceedings.

OK, Iowa students: How can you turn down this sweetheart deal on football season tickets?

The university announced Monday that students who purchase season tickets by May 15 will pay just $125, a $50 savings. All new students will also pay just $125 if they purchase their tickets by July 31. Students not buying tickets by those deadlines will pay $175 for a schedule that has home dates against Illinois State, Pittsburgh, North Texas State, Illinois, Maryland, Minnesota and Purdue. Student-ticket sales at Iowa have nose-dived in recent seasons. A total of 10,371 student tickets were sold in 2012. The figure dipped to 7,382 in 2013 and 6,440 in 2014.

The great Loren Tate of the Champaign News-Gazette says recruiting struggles have the Big Ten hoops in a rut. And, I?m not gonna argue with Tate. I think he invented journalism.

Tate also says that in the last four classes, Indiana has attracted eight Top 50 players, but no other Big Ten school has brought in more than one per year. And half of the Big Ten schools haven?t brought in any. Not one top-50 high school player in four years by Minnesota, Northwestern, Penn State,  Rutgers, Nebraska, Purdue and Iowa. Wisconsin has had one: junior Sam Dekker.

And look at Illinois? recruiting issues. Why didn?t the Fighting Illini build off the mojo of that 37-2 team that was national runner-up in 2005? Illinois posted five NCAA wins in 2005 and has a total of three in nine seasons since. And Tate says the Illini basketball image - the brand - gradually slipped from top 10 to somewhere in the top 50.

So, SEC commish Mike Slive isn?t in favor of freshman ineligibility. Tell me you aren?t shocked.

Woe?s the Spartans, who have lost consecutive games for just the second time this season coming off a listless defeat at Wisconsin on Sunday. But, Michigan State has one last shot to finish strong with a home game vs. Purdue and a trip to Indiana. The Spartans still likely are in need of one more win to secure an 18th consecutive NCAA tournament berth.

"Our thing is just getting back on track and just putting this thing together and getting rolling at the right time" Spartans senior guard Travis Trice said. "It needs to be now."

Remember when it looked like there was hope for Michigan?s season? Yes, so do I.

NIT, anyone? Work remains to achieve that goal, says Brendan F. Quinn of Milive.com, as the Wolverines finish vs. Northwestern and Rutgers. As things currently appear, that opening Big Ten tourney game might stand as an NIT play-in game for the Wolverines, whether they win the final two games of the regular season or split.

With a résumé featuring plenty of lowlights and only two top-50 RPI wins (Oregon, Ohio State), Michigan doesn't currently warrant a free pass to March's second-tier tournament. Quinn thinks if the regular season ends with a split, followed by a one-and-done trip to the Big Ten tournament, that will be it for the 2014-15 campaign.

OK, NFL Draftniks: Pro days are starting. And many will have their eyes on the one for Indiana RB Tevin Coleman.

Personally, I love this guy and think he will excel. I am eager to see what his 40 time will be.