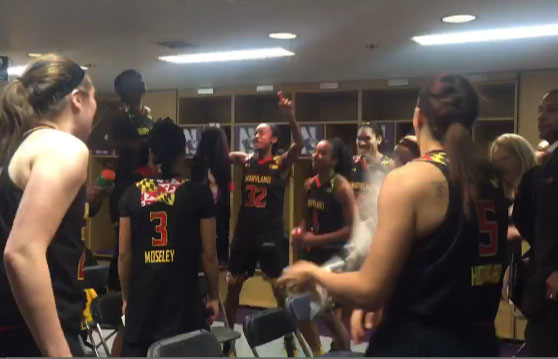 Brionna Jones had 14 points and 13 rebounds and Shatori Walker-Kimbrough added 11 points as the Terrapins (27-2) pulled away in the second half for their 21st straight win.

Maryland, which is riding a 21-game winning streak, clinched the Big Ten regular-season title outright last week and heads into this week's conference tournament in suburban Chicago as the top seed.

Here are the other Big Ten results:

RUTGERS 71, INDIANA 60: BOX | AP RECAP
Kahleah Copper scored 24 points to lead No. 20 Rutgers over Indiana 71-60 on Sunday. Rutgers finished tied for fourth with No. 25 Northwestern in its first season in the Big Ten.

IOWA 92, MINNESOTA 76: BOX | AP RECAP
Melissa Dixon hit eight 3-pointers and scored 27 points, two other players got close to triple-doubles on Sunday and No. 17 Iowa set a record for home wins with a 92-76 win over Minnesota.

OHIO STATE 78, NEBRASKA 60: BOX | RECAP
Four Buckeyes scored in double-figures led by 28 from freshman Kelsey Mitchell as Ohio State finished the regular season with a 78-60 rout of No. 23 Nebraska.