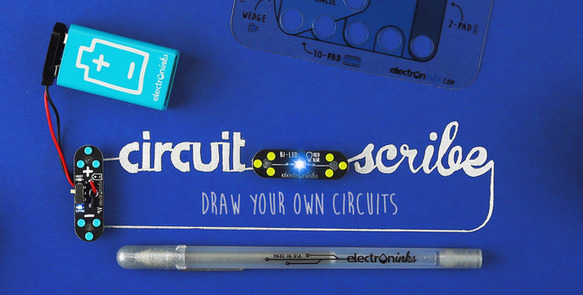 If you were asked to create a working electrical circuit in less than a minute, could you do it? How about in under an hour?

For most people, the answer to both questions would probably be ?no.? Then again, most people don?t know about the Circuit Scribe.

Developed by material science and engineering Ph.D. student Brett Walker and his team at the University of Illinois, Circuit Scribe is a roller-ball conductive pen that allows users to create an electrical circuit on a regular sheet of paper in mere seconds.

?A conductive pen makes an electrical connection as soon as you write with it,? said Walker, who earned his doctorate at Illinois in 2013 and co-founded Electroninks Inc. to sell Circuit Scribe and related products. ?In our case, it?s a pen filled with a silver flake-based ink.

?The Circuit Scribe pen, unlike other conductive pens, dries immediately at room temperature,? he added. ?So, as quickly as you can sign your name or doodle on a piece of paper, you can create a working circuit.?

The pen has obvious appeal for electrical engineers who want to work up circuit prototypes quickly. But Walker believes it could be of interest to groups ranging from high school science students to arts-and-crafts enthusiasts of all ages.

Consequently, Walker and the Electroninks staff have spent a considerable amount of time figuring out how to make Circuit Scribe a viable consumer product. And they?ve found building up that kind of business is at least as challenging as actually developing the pen.

[btn-post-package]?Two billion pens are consumed every year in the United States, so the disposable pen market is huge,? Walker explained. ?We made an [initial] order of 60,000 to 120,000 of these things. That?s basically a sneeze for the roller-ball pen market. We really had to do some background work and develop the supply chain to where we could actually produce the pens. It took a while to develop the business relationships.?

Additionally, the pen needed to be certified as non-toxic and meet other regulatory requirements before it could be sold to the general public. That effort paid off in the end, though.

?There was quite a bit of development work,? Walker said. ?We had to reformulate the ink. We ended up coming with an ink that?s about 10 times more conductive than the original. And it even dries faster, so we have an ink that?s much more viable as an actual prototyping tool.?

Watch the one-minute LiveBIG video segment above to find out more about this innovative new technology.