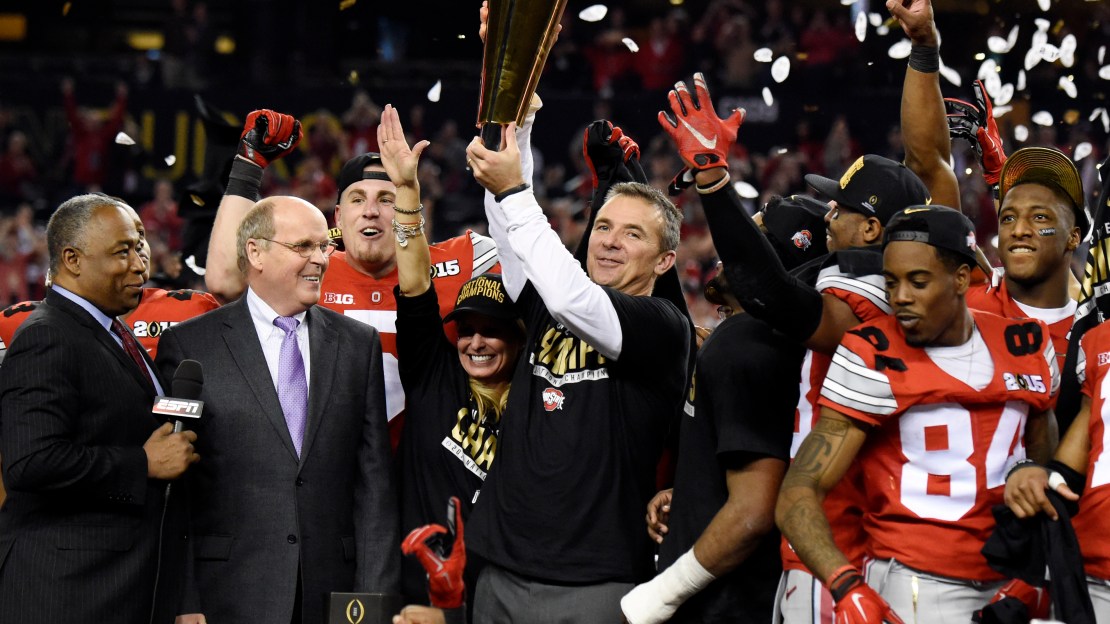 If every college football head coaching job became available tomorrow, which would be the most desirable?

ESPN.com's Travis Haney (@TravHaneyESPN) recently headed a project, which ranked each of the 65 college football jobs at the Power 5 level. He released them in three categories: Bottom of the barrel jobs, middle of the road jobs, and top 24 jobs.

According to the article, the list includes factors such as location, administrative stability, support from those bosses, facilities, recruiting base, path to conference titles/playoff, sense of tradition, fervor of fan base, too much fervor from a fan base, etc.

Our friends over at ESPN received feedback from various coaches and industry sources to help shape the rankings.

Here is a look at where all six Big Ten teams land on the list, as well as a snippet about why they received that ranking.

"When Meyer landed at Ohio State, there was a collective "uh oh" emanating from the rest of the Big Ten and college football's powers. It was a match that seemed as if it would quickly yield results, and it has. If not for NCAA restrictions, including a postseason ban, the Buckeyes might have been in title position sooner."

"Michigan is only beginning its resurgence phase, but the hire of Jim Harbaugh provided a sizable spark. NFL types never really thought Harbaugh would spurn pro ball and return to his alma mater. And yet here he is, wearing a goofy grin and a block "M" ballcap. Harbaugh hasn't even coached a game at the Big House yet, and it can be said with some certainty that the NFL is the biggest threat to Michigan's long-term success."

"The state has always been strong for recruiting, and Joe Paterno made Penn State a national name. The program still resonates with high school coaches and players across the country; it was never irreconcilably damaged. And Franklin's attitude definitely helps to assuage whatever ill feelings it does encounter."

"It (Michigan State) has the potential to be a perennial top-15 team that can, every few years, compete for a Rose Bowl and/or playoff berth. If the job were open tomorrow, the new coach would be wise to follow Mark Dantonio's lead on a recruiting and development model."

"This is the best job in the Big Ten West, and yet (spoiler alert) it's behind three programs from the league's other division. That speaks to the gap between the East and West, but it also suggests that there are questions about Nebraska's viability. Like Miami, time has not been kind to a program that ruled college football not all that long ago. Geographical realities have set in for a program that has to recruit nationally to remain relevant. The fan base is strong. The facilities are excellent. The pockets, especially for recruiting, are as deep as anywhere in the league. This was a huge step up for Riley, make no mistake there."

"The program has a solid reputation nationally, built up for years thanks in large part to the work of former coach and current athletic director Barry Alvarez. Madison is one of the better college towns in the country, so long as it's warm. If the administration proves to be a bit more flexible, understanding that it needs to keep with the times in college football, this could easily move back toward being a top-15 job."