Bryant McIntosh Q&A: 'Yes, I definitely think I could' beat Chris Collins 1-on-1 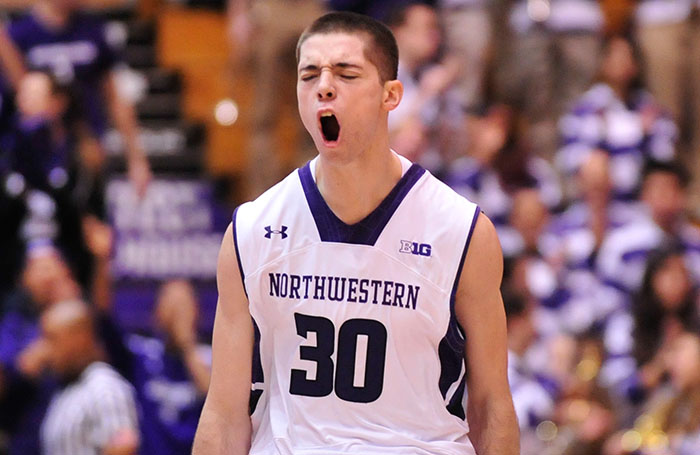 When the discussing Big Ten freshmen, Ohio State?s D?Angelo Russell, Indiana?s James Blackmon, Jr., and Maryland?s Melo Trimble dominate the conversation. And rightly so. But Northwestern has a good one in point guard Bryant McIntosh.

The 6-3, 177-pound New Castle, Ind., native is having a banner debut, averaging 12.1 points, 4.5 assists and 2.6 rebounds. The Greensburg High product is the Wildcats? second-leading scorer and leads in assists.

Even better, McIntosh has Northwestern playing well down the stretch as part of one of the NU?s most touted freshman classes ever that also includes Vic Law, Scottie Lindsey, Gavin Skelly and Johnnie Vassar.

McIntosh and the Wildcats (13-14 overall; 4-10 Big Ten) are hot, bringing a three-game winning streak into tonight?s game vs. visiting Indiana (19-9; 9-6), knocking off Iowa, Minnesota and Penn State. This comes on the heels of a 10-game losing streak that shook the program to its foundations in its second year under Chris Collins.

McIntosh and his NU teammates look to finish strong vs. a Hoosiers program that the Cats split with last year.

I caught up with McIntosh to get his thoughts on his debut season, Northwestern?s surge and more.

Q: What has been the key to success during this three-game winning streak?
A: Coach kept telling us, ?we?re gonna start over, we?re gonna start fresh, we are starting a new season.? And we took on a new identity. Our 2-3 zone is more active and forcing more turnovers, and our offense has still been productive. Those have been keys.

Q: How low did morale get during that 10-game losing skid?
A: It was low. After the Michigan State game (a 68-44 home loss on Feb. 10), Coach Collins said we looked defeated in the game. One thing went wrong, they hit a couple shots, and we looked like we were defeated. And that was in, like, the first seven minutes of the game. Coach then said we couldn?t go on like this, that we were going to compete and weren?t going down like that. We were going to start fresh and start over.

Q: What would it mean to someday deliver Northwestern its first NCAA bid?
A: It would be great. A lot of people have been waiting for it happen. The media in Chicago is even waiting for us to finally get it done. It would mean a lot not to just us but also to the people who have ties to Northwestern and love the school. My freshman class, we talk about how we want to be the class that is the cornerstone behind it and be the ones who got us there.

Q: How does a kid from Indiana, get out of the Hoosier State to play college ball?
A: Coach Collins did an excellent job recruiting me. The staff connected with those around me that were going to help me make my decision, making them feel comfortable. Indiana didn?t recruit the way I had hoped. I didn?t feel like when they did offer me that they were the best fit for me. I felt like Northwestern was the best fit. Purdue recruited me. Coach (Matt) Painter, I respect him, he did a great job recruiting me. But I didn?t feel like they made me a priority like Northwestern did. I felt more needed here.

Q: What is your best shot?
A: The best thing I score on is my floater, getting into the lane and shooting floaters over big guys. That is my best move, getting to the lane and finishing with a floater.

Q: Could you beat Coach Collins one-on-one?
A: Yes, I definitely think I could. I would start with my left hand and go between my legs, cross back to my left, and then either shoot a pull-up jumper or get into the lane for a floater.

Q: Who studies the most on the team?
A: Good question. A lot of us have to study a lot. But I would say Sobo (Dave Sobolewski) is the best at studying for school, and in basketball-picking things up on film. Him or Jeremiah (Kreisberg) are the smartest on the team.

Q: So, if you had one lifeline, one phone call to make to answer a question, you would call Sobolewski?
A: Yes, yes.

Q: What is the best high school gym you played in?
A: It?s a tie. I grew up in New Castle, Ind., which has the largest and finest gym. And also Richmond (Ind.). Those were my favorites.

Q: You ever meet Steve Alford, a native of New Castle?
A: Yes. He recruited me a little. I also went to a lot of his camps when I was younger.