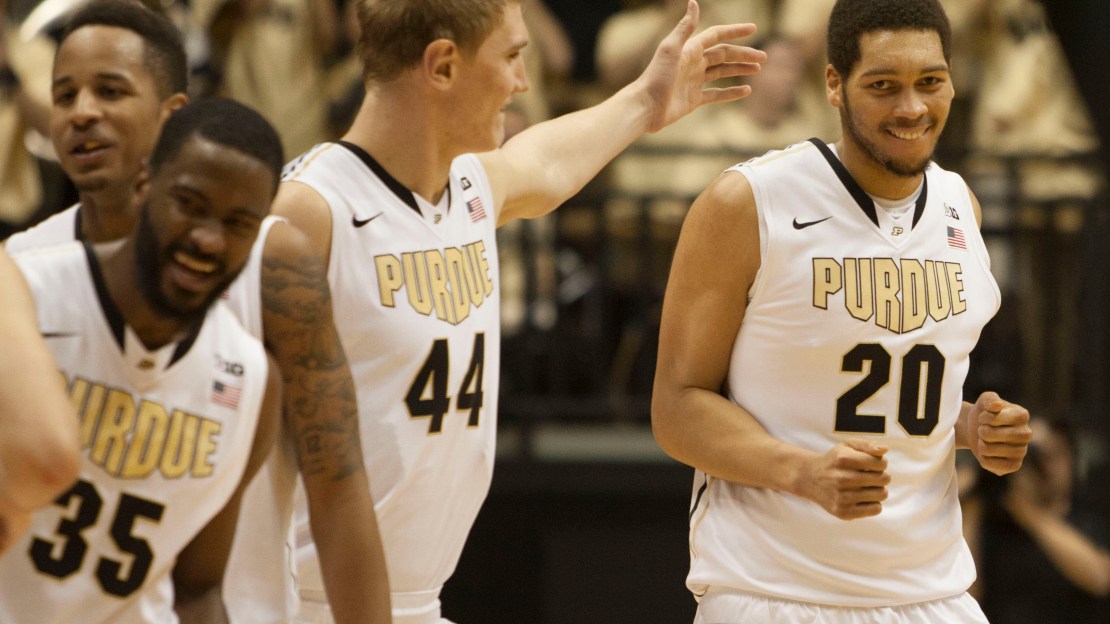 Get my latest takes below.

1. Craving some Ham(mons) and Haas

If I owned a restaurant in West Lafayette, Indiana, I'd serve Boiler fans a "Ham(mons) and Haas" special this week. It would feature a big slice of Ham and Beef in honor of the country-strong performances by junior A.J. Hammons and freshman Isaac Haas at Indiana.

The two centers combined for 32 points, 13 rebounds and 4 blocks in Purdue's victory. The Boilermakers were desperate for a quality road win, and recording one on the road in the Big Ten's most storied rivalry is no small feat. In fact, the decision marked Indiana's first home Big Ten loss of the season.

Due to quality defense, physical play, and a willingness to attack the rim – see Jon Octeus' dunk of the year candidate over Collin Hartman above – Purdue has almost popped the NCAA tournament bubble. Over their last eight games, the Boilers have made 135 free throws while their opponents have only attempted 128. Purdue has held all 14 Big Ten opponents under their pregame scoring average in regulation.

In two wins against Indiana this season, Purdue has held the high-octane Hoosiers to 40.5 percent from the field and 25.7 percent from behind the stripe, compared to 47.7 and 41.4 percent on the season. Hammons is 12-of-13 from the floor, with 31  points and 12 blocks.

TV does not do justice how big Hammons and Haas are, and they using their size at both ends against smaller Big Ten players.

"Without question, that is the best game they've played together all season," said coach of the year candidate Matt Painter.

Which Michigan State player is averaging 34.5 minutes and shooting 100 percent from the field in the last two games? It's not Travis Trice, and it's not even rim-rocker Branden Dawson. The answer is Lourawls "Tum Tum" Nairn. Granted, Tum Tum has only taken four shots. Still, he hasn't missed and he's helped guided the Spartans to two quality wins.

In rivalry wins over Ohio State and Michigan, Tum Tum has doubled his playing time and Sparty is rolling.  With the success of so many quality Big Ten freshman, I'm not sure any has impacted his team's success over the last week more than Narin.

With Tum Tum pushing the ball, Michigan State is running again. More significant is the pressure he takes off of Bryn Forbes and, especially, Trice, who is coming off the bench and playing with the same confidence he had early in the conference season. Trice scored 22 points, handed out seven assists and finished with only one turnover against Michigan.  Most of the assists were to Dawson, (23 points 13 rebounds), who soared above the rim to dunk Trice's lobs.

This is the time of the year when freshmen either rise or fall. Tum Tum and Michigan state are on the rise.

3. About this freshman ineligibility  …

I have a few thoughts on the freshman ineligibility/one-and-done discussions that have arisen in the last few days.

First of all, there are only a handful of players talented enough to leave school early, and even though they get all of the headlines, most student-athletes are in school to be student-athletes.

Second, isn't there an argument to be made that the pressure, competition, expectations, and regimented schedules of college athletics help make student-athletes better academically? I'm curious, are redshirt, injured, or ineligible freshman stronger academically than those playing?

My biggest concern for all student-athletes has always been whether they are taking purpose-driven classes that train and prepare them in their chosen field of study so that they are equipped to use their gifts and talents when their athletic dreams end. Academic advisers and counselors play an important role in this.

Finally, the Power 5 conferences would need to convince all conferences to join the party, and that will be extremely tough to accomplish.