Big Ten Survey: Who is the conference's best dunker? 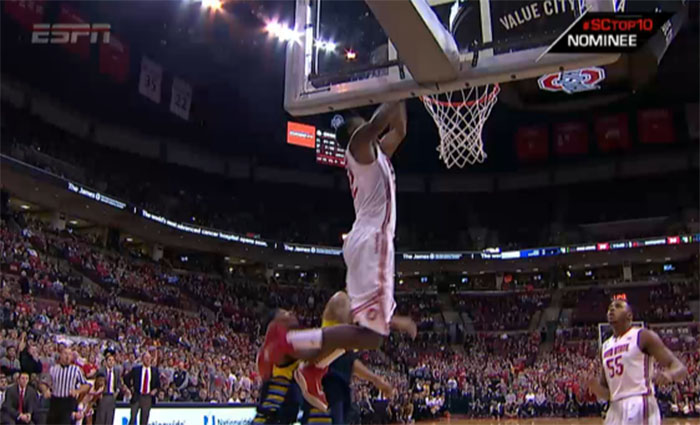 We have seen some monster dunks this season in the Big Ten. None more thunderous than the throw-down by Purdue?s Jon Octeus last night at Indiana. I asked five Big Ten writers for their opinion on who is the best dunker in the Big Ten.

Chad Leistikow, Des Moines Register: From sheer athleticism and highlight-reel throw-downs, it?s got to be Ohio State?s Sam Thompson. If we?re talking a frequent and central part of his game, it?d be hard to top the dunking effectiveness of Iowa?s Aaron White.

Brandon Castel, The-Ozone.net: I would have to agree with Joe (Rexrode). Dawson throws down some serious fire on his dunks. If you like power, he's the guy. From an overall perspective, I think Sam Thompson is on a different level than everyone else. His athleticism is off the charts and he makes it look so easy and has so many different types of highlight dunks that he would get my vote.

Brian Rosenthal, Lincoln Journal Star: So, we're ruling out Benny Parker, eh? My vote goes to Sam Thompson. I've been in awe more than once at his athleticism.