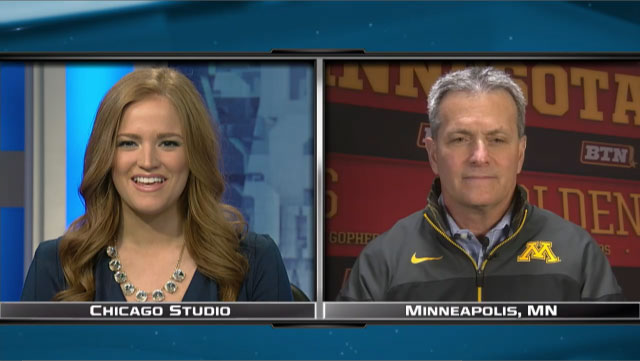 It was a weekend of upset sweeps as Minnesota took down No. 12 Michigan in a series sweep at Mariucci Arena and the Spartans dethroned No. 19 Penn State at Munn Arena. Watch the latest "BTN Hockey Report" in the video above.

A weekend of upsets shook up the Big Ten standings. Michigan and Minnesota are now tied for first place, while Michigan State and Penn State are tied for third place. Here?s a weekend preview of all your Big Ten hockey action:

MICHIGAN VS OHIO STATE
When: Friday, Feb. 20 7:05 p.m. ET; Sunday, Feb. 22 5 p.m. ET
How to watch: Friday?s game airs live on BTN Plus and Sunday?s game airs live on BTN2Go.
Players to watch: Michigan?s Dylan Larkin leads all Big Ten freshmen with 32 points (10 G, 22 A) on the season. He is No. 2 in the nation in freshman scoring. Buckeye junior forward Anthony Greco leads the team with 14 goals and 17 points.
The latest on the Wolverines: After getting swept by Minnesota last weekend, Michigan is now tied for first in the conference standings with 24 points. The Wolverines will close out an eight-game stretch on the road away from Yost on Friday night against the Buckeyes.
The latest on the Buckeyes: Ohio State is coming off a split weekend at home against Wisconsin. The Buckeyes are fifth in the Big Ten standings with nine points and a 3-9 record in the conference.
In summary: In their last meeting, Ohio State lost to No. 19 Michigan, 10-6, at Value City arena. Buckeye goalie Christian Frey will be tested against Michigan?s offense, which is ranked first nationally in scoring.

When: Friday, Feb. 20 6:40 p.m. ET; Saturday, Feb. 21 5:07 p.m. ET
How to watch: Friday and Saturday?s game will air live on BTN2GO (watch Friday and watch Saturday)
Players to watch: Minnesota?s Kyle Rau is coming off a four-goal weekend against the Wolverines. The senior captain earned Big Ten Second Star of the Week. Penn State?s Casey Bailey earned his 20th goal of the season against the Spartans last weekend.
The latest on the Gophers: A two-game sweep over Michigan propelled the Gophers into a tie for first place in the Big Ten and back into the national rankings. Minnesota boasts a six-game unbeaten streak and the six Minnesota seniors have combined to score 16 of the team?s 29 points during the run.
The Latest on the Nittany Lions: Penn State was swept by Michigan State last weekend for the first time this season. The Nittany Lions are now tied for third in the Big Ten standings and will have the home ice advantage against the Gophers.
In summary: All-American Gopher goalie Adam Wilcox appears to be back in full force, but the dynamic Penn State line of Casey Bailey, Taylor Holstrom and David Goodwin could cause some trouble for Wilcox between the pipes.

MICHIGAN STATE AT WISCONSIN
When: Friday, Feb. 20 9 p.m. ET; Saturday, Feb. 21 8 p.m. ET
How to watch: Friday?s game airs live on BTN (also watch on BTN2Go) and Saturday?s game will air live on BTN2Go.
Players to watch: Michigan State?s Mackenzie MacEachern had a breakout weekend with five points and both game-winning goals to lead the Spartans to a series sweep over Penn State. MacEachern netted his first career hat trick on Saturday, the first three-goal outing by a Spartan since November 2012. Wisconsin?s Joel Rumpel anchors the Badger defense and had 28 saves in the 3-2 victory over Ohio State on Saturday.
The latest on the Spartans: Michigan State is coming off a sweep of Penn State and will hit the road for its next four games. The Spartans are 3-6-1 on the road overall and currently tied with Penn State for third place in the Big Ten with 22 points.
The latest on the Badgers: Wisconsin earned its first Big Ten win with a 3-2 victory at Ohio State on Saturday night. The Badgers are 2-9-3 at home and check in at last place in the Big Ten standings with seven points.
In summary: It will be a tough weekend for the goal scorers as this series features two of the most talented goaltenders in the Big Ten. Michigan State?s Jake Hildebrand and Wisconsin?s Joel Rumpel will make offense a challenge on both sides.