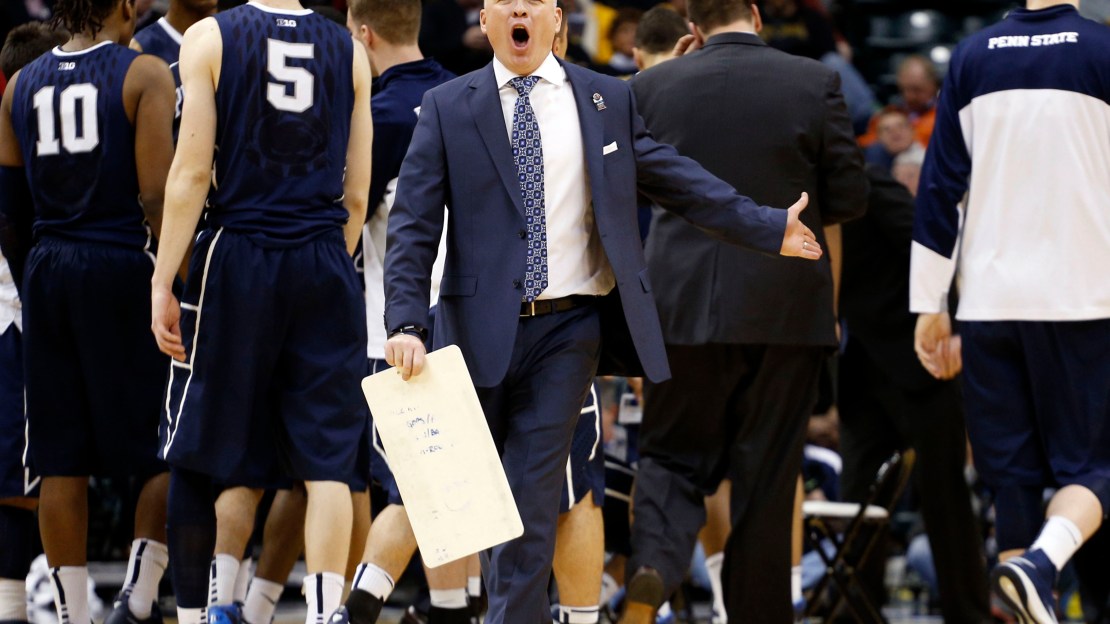 Penn State coach Pat Chambers has been making headlines for all of the wrong reasons, vocalizing his displeasure with Big Ten officiating not once but twice this season. His latest rant was epic and resulted in a reprimand from the league and fine for the school.

But PSU AD Sandy Barbour is behind Chambers. That?s well, good and expected. But, Chambers needs to dial it down. There are ways to let the league know you are hacked off about the officiating. Ripping refs to the media isn?t the proper channel. Check the league handbook, Pat.

"I think where we're going with these kids; Patrick Chambers is my guy. He's going to be with us, and I think he's going to build us a long-term successful program."

OK, recruiting information has gone too far: Profiles of six-grade football players? Really? Is this a publicity stunt? Or a trend? Either way, it?s shameful.

Dan Duggan of NJ.com knows his Rutgers football. Check out his breakdown of the Scarlet Knights defense for 2015. There is even a gallery of the projected starters on the defense. The strongest position? End. Duggan says: ?The most well-stocked position on the defense has three-year starter Djwany Mera at one end and emerging superstar Kemoko Turay at the other end. With quality depth, Rutgers should have a strong defensive end rotation.?

Indiana big man Hanner Mosquera-Perea is regaining his form just in time for a big visit from Purdue.

Indiana's junior forward sat out the Hoosiers' 83-67 loss at Purdue on Jan. 28 because of a right knee injury. Playing small without him, the Hoosiers struggled to manage Purdue's two-man 7-foot rotation of A.J. Hammons (11 points, three rebounds, eight blocks) and Isaac Haas (four points). With Mosquera-Perea inside, IU should have even more room for its array of shooters on the perimeter.

It?s a bit amazing that Wisconsin hasn?t skipped a beat since losing point man Traevon Jackson to injury (foot) on Jan. 11. When he returns, the team will have a conundrum: What to do with Bronson Koenig, who has excelled in Jackson?s absence?

Since taking over as Jackson's replacement, Koenig has scored in double figures in seven of eight games-and UW is 8-0. And in nine starts this season — one was to replace Frank Kaminsky, who had concussion-like symptoms for the Rutgers game — Koenig is averaging 12.9 points, 2.3 assists and 2.2 rebounds. Not bad. So, Jackson or Koenig? This is what I call a ?luxury? problem for Bo Ryan.

Who is the top offensive lineman in the NFL Draft? Mike Mayock of NFL Network says it?s Iowa?s Brandon Scherff. No shock.

Scherff was a two-time All-Big Ten tackle at Iowa. He was a consensus All-American this year as well as the school?s third Outland Trophy winner. Scherff?s position flexibility (guard or tackle?) is an asset for whatever team picks him. A majority of mock drafts have the New York Giants selecting Scherff with the ninth overall pick.

?I?ll tell you, to me, it?s intriguing because Brandon Scherff is going to be whatever he?s going to be by whatever team picks him,? Mayock said.

Nice story here from Tom Shatel of Omaha.com on Terran Petteway, who has had his mother?s health on his mind as she deals with cancer.

Petteway hasn?t been himself this season. And now we know why. As Shatel says: Let that be a lesson to all of us critics: We don?t really know these young men who play these games we love. We don?t know what?s behind the mask, what?s inside their hearts and heads.

How about this: Jim Harbaugh is helping Jameis Winston and Bryce Petty prep for the draft.

I?ll leave you with this from David Jones of Pennlive.com on a cold Wednesday morning: Has Dick Vitale run his course?

It's been 35 seasons since Vitale analyzed his first game on ESPN back in November 1979: Wisconsin at DePaul. The broadcast was in color, not black and white. Trust me. And now ESPN is taking Dickie V off his favorite game for the first time in all that period-Duke-North Carolina. ESPN told Vitale before the season started that they were making Jay Bilas the analyst for North Carolina-Duke. But it just became common knowledge yesterday.

Vitale is bummed. Well, we all get replaced eventually. Be a big boy about it. By the way: Did you ever watch a game just because Vitale was commentating? I didn?t. But I can tell you this: I often DID NOT watch a game when I discovered he was working it.