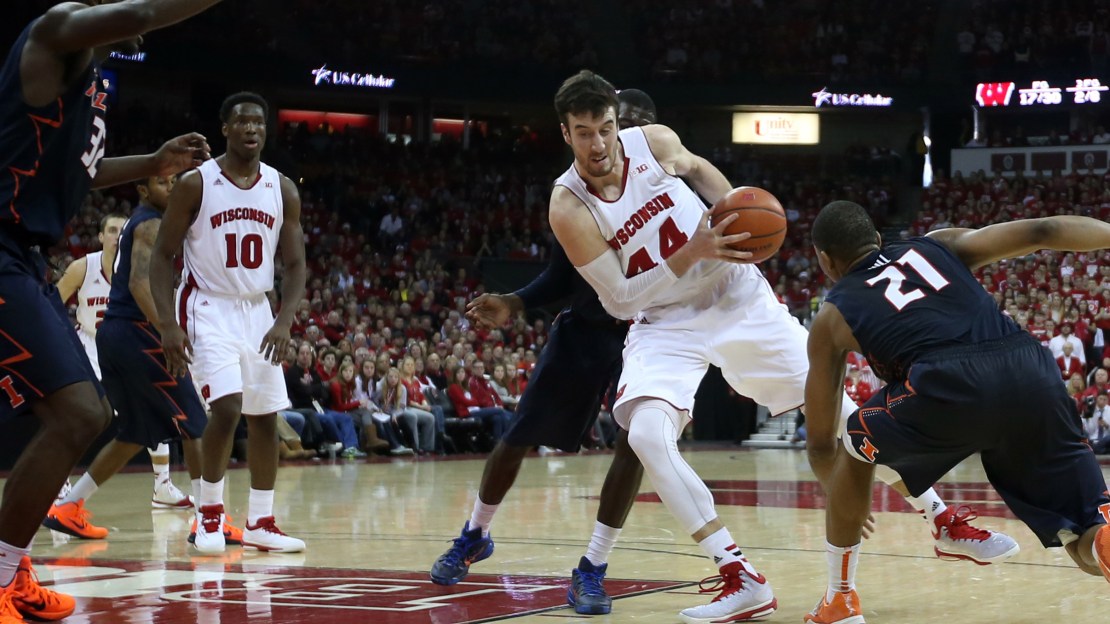 Another week is in the books, and it was another opportunity for Wisconsin to prove its case as the Big Ten's runaway leader.

The Badgers took care of business at Nebraska (65-55), which was 5-1 at home in Big Ten play entering Tuesday, and cooled off Illinois (68-49), which entered Sunday riding a four-game winning streak.

Get my best of the week that was below.

Biggest surprise: Purdue. The Boilermakers continue to make a case for an NCAA tourney bid, winning six of seven games to improve to 17-9 overall and 9-4 in the Big Ten. A commitment to defense has keyed Purdue?s march toward the Big Dance. Three of the last five games are on the road: at Indiana, at Ohio State, at Michigan State. The Boilers can help their cause by winning at least one of those contests. How did this team lose home games to North Florida and Gardner-Webb? Oh, well. Forget the past. The present (and future) looks promising for Matt Painter's team.

Biggest disappointment: Penn State. Look, no one expected big things from the Nittany Lions. But this is turning into a nightmare campaign for Penn State, which has lost two in a row and four of five games. The latest loss saw Nittany Lions coach Pat Chambers rip officials in a 76-73 home loss to Maryland. It was the second time this season Chambers railed on refs. Is a suspension coming?

Top stat line: How good is Wisconsin?s Frank Kaminsky? His line vs. Illinois on Sunday was impressive. "Frank The Tank" hit 11-of-16 shots for 23 points (he had just one point at the free throw line) and added 11 rebounds. Just give him the Big Ten Player of the Year award now.

Top moment: Denzel Valentine hitting a game-winning three-pointer with 3.2 seconds left on Valentine?s Day to beat Ohio State is pretty cool. But let?s go with Illinois? furious finish on Thursday. Michigan led Illinois, 50-43, with just over three minutes left in regulation. That?s when the Illini went on a run 21-2 run that extended into overtime and resulted in a 64-52 win on Thursday.

Did you see this? Doug Collins, the former NBA coach and father of Northwestern coach Chris Collins, was just a little bit nervous in the final seconds of regulation Sunday vs. Iowa. At times, he couldn't stand to watch, putting his face in his hands. Then, there was his reaction to Jarrod Uthoff hitting a fadeaway 3-pointer to send the game to overtime. No worries, Northwestern won the game in overtime to snap a 10-game losing streak.

Top dunk: Trailing by two midway through the second half at Maryland, Indiana?s James Blackmon Jr. took a pass from Yogi Ferrell and threw down a thunderous one-handed slam over two Terps. Stunning. Earth-shaking. Fun.

Put it on a poster! @IndianaMBB's James Blackmon Jr. skies for a HUGE dunk over a Maryland defender #IntelGoesB1G http://t.co/gpuYiSWvhD

Stock up: Wisconsin. The Badgers continue to roll, tallying wins at Nebraska and vs. Illinois to push their winning streak to eight games since a confounding loss at Rutgers on Jan. 11. Will Wisconsin lose again? Road games at Maryland, at Minnesota and at Ohio State will be a challenge, as will a visit from Michigan State.

#Badgers remaining sked is vs. teams with a combined 38-37 #B1G record. Do they run table? pic.twitter.com/RY3mF7kOD8

Stock down: Iowa. The Hawkeyes lost two dreadful games last week, falling at home to Minnesota and then getting clipped in overtime at Northwestern, which had lost 10 straight games. Add it up, and Iowa is 2-5 in its last seven games. Are the Hawkeyes playing themselves out of the Big Dance?

A.J. Hammons scored 17 points to help Purdue to a 61-51 victory on Thursday at Rutgers.

Michigan State?s Denzel Valentine celebrated Feb. 14 in style, sinking a 3-pointer with 3.2 seconds remaining to give Michigan State a 59-56 victory over No. 23 Ohio State on Saturday.

Sam Dekker matched his career high with 21 points, and No. 5 Wisconsin topped Nebraska, 65-55, victory on Tuesday.

Northwestern?s win vs. Iowa on Sunday was its first victory in 2015; it had lost 10 straight since a win at Rutgers in the conference opener on Dec. 30.

Michigan State?s Tom Izzo improved to 32-4 all-time against Northwestern and also moved into a tie with former Purdue coach Ward Lambert for third on the career Big Ten victories list with 228. Bob Knight is on top with 353 Big Ten wins at Indiana, and Gene Keady is second with 265 conference wins at Purdue.

The last time the Illini defeated a top-five team on the road was March 5, 1989, when Nick Anderson's 35-footer at the buzzer led Illinois past No. 3 Indiana 70-67. The Illini lost at No. 4 Wisconsin on Sunday.

The Badgers? win at Nebraska on Tuesday clinched a winning Big Ten record for the 15th straight year.

Indiana?s Yogi Ferrell has made at least one 3-pointer in 56 straight games, a school record and the longest active streak in the nation.

Speaking of Indiana and 3-pointers, it hit a school-record 18 triples in Sunday night's win over Minnesota.

Rutgers has lost 10 in a row. RU has not won since knocking off then-No. 4 Wisconsin on Jan. 11. The losing streak is the longest for the Scarlet Knights since dropping nine straight in the 2009-10 season.

The Boilermakers snapped a seven-game road losing streak in the month of February. Their last away win in the month was against Penn State on Feb. 5, 2013.

Purdue?s win at Rutgers on Thursday was its 16th of the season, surpassing the team?s total from last season. The Boilers were 15-17 in 2013-14.

"You're doing standup but you're sitting down." – Wisconsin coach Bo Ryan, to a reporter who suggested that the Badgers were the team best suited to beat No. 1 Kentucky.

"How they sit through 21 percent shooting and not head to the Railyard (bar district) is beyond me." – Nebraska coach Tim Miles, on Nebraska fans after a loss to Wisconsin on Tuesday.

"I'm not going to beg for an NCAA bid. I'm going to let our team do its talking." Michigan State coach Tom Izzo, after a 59-56 win vs. Ohio State on Saturday improved the Spartans to 17-8 overall and 8-4 in the Big Ten.

?When there's three minutes to go and you're down by seven, you've got to go now. To close the game on a 21-2 run, it wasn't necessarily about execution, it was about heart." Illinois coach John Groce, after this team rallied for a 64-52 win on Thursday vs. Michigan

"It's the worst call I've ever seen in my entire life. They're pulling Jordan Dickerson down. It's frustrating and disappointing, but we have to take the refs out of the game and we didn't. With 1:50 left, it was a huge play." – Penn State coach Pat Chambers, after 76-73 home loss to Maryland on Saturday in which he felt calls went against his team

"Give Valentine credit – that was an incredible shot. I thought we had them right where we wanted them in terms of how the action developed." Ohio State coach Thad Matta, after losing to MSU on Saturday after Denzel Valentine hit a game-winning 3-pointer in the waning seconds

"This is one of the best teams in the Big Ten at home. If you look at their home record throughout the whole season, it's significantly better at home than on the road, and we knew that coming in and we knew they'd feed off their crowd. We were able to neutralize it. – Wisconsin?s Frank Kaminsky, after a win at Nebraska on Tuesday.

"Time ran out on them. I don't care how you do it, we had to get a stop and we got one." – Maryland coach Mark Turgeon, after Yogi Ferrell missed two shots at the end of a 68-66 Terps? win on Wednesday.

"I wouldn't trade him for anyone. That's about the best statement I can give. He's playing very well with room to get better." – Indiana?s Tom Crean, when asked after a tough loss at Maryland where Yogi Ferrell stands among the nation?s point guards.