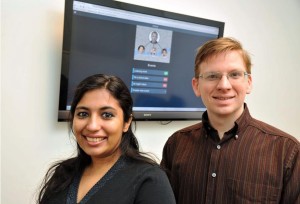 That question went through the mind of Nishana Ismail for years while growing up in her native India and attending the University of Illinois. She knew several people who?d been victims of all kinds of assault in both places, which demonstrated the universal nature of this problem.

?This is something that has always been very close to my heart,? she said. ?I?ve had friends get mugged, some very close to their homes. You would assume it would be difficult, but in many cases, their phones were either taken away or it was so aggressive that they couldn't get to them.?

The problem-solver in her took over, and she enlisted the help of Tim Deppen, her friend and fellow engineering graduate student, to come up with a solution. With an innovative and entrepreneurial spirit, they created a device that they hope will make the world a safer place.

Their partnership led them to create a personal security company called Servabo. (The name is derived from a Latin word that roughly translates to ?I will guard.?) Their main product, the Shadow, is basically a Bluetooth device that can send an alert to police with a location if the user is in trouble.

For Deppen, it?s a bit of a deviation from his original plan to work for the U.S. government after completing his Ph.D. at Illinois. A self-proclaimed robotics aficionado, Deppen put his goal of building a personal safety robot on hold to work on this project.

?Going into my last year of Ph.D. was really the first time entrepreneurship came up,? he said. ?It really took a life of its own. It was the most direct path to have a positive impact on the community.?

To develop the Shadow, they tapped into experts with the local police and campus security forces, along with parents and community members. Their aim was to create the most practical device that could do the most good.

?Throughout our journey, we?ve gotten great feedback, especially from parents,? Deppen said. ?They?re really happy with the design and the way it works.?

After winning both campus and community awards, the pair decided it was time to take the show on the road. Now they?re putting their money - and other people?s, hopefully - where their mouth is with a month-long crowd-funding campaign on Indiegogo.

?There is a lot to learn, too, because you don?t know as much about the marketing,? Ismail said. ?You start to learn the value of it and you?re like, ?Oh my god.??

The goal of the crowd-funding campaign is to raise $60,000 to start mass-producing the Shadow device, but Ismail said they?re also looking at it as a pre-sale. If all goes to plan, they?ll have orders filled by the end of the summer and be ready for their next move.

Both Illini alums credit the school?s entrepreneurship program for helping them get this far.

?We are very lucky to have our mentors and advisers right there,? Ismail said. ?We?re surrounded by people that have been with us the whole way. We have a very thriving entrepreneurial environment here.?

She said it was amazing to work alongside other up-and-coming small business owners while picking the brains of lawyers, established entrepreneurs and others who have been through the process - all for free.

They?ve also gotten support  from advocacy groups like the YWCA in Evanston and the Rape, Abuse & Incest National Network (RAINN).

[btn-post-package]?We have been lucky to have some really good connections,? Ismail said, adding that many people in these groups have promised to buy a Shadow for themselves or donate it - or both. ?People in the community have been really supportive. We?re hoping we can reach some people who really need it.?

To that end, they plan to hit women?s expos in Michigan, Oklahoma and Missouri in the near future.

?We have all our ducks in a row,? Ismail said. ?We just need to know if our ducks are working.?

?It?s risky and it?s scary, but hopefully the reward will be that much better in the end,? Deppen added.