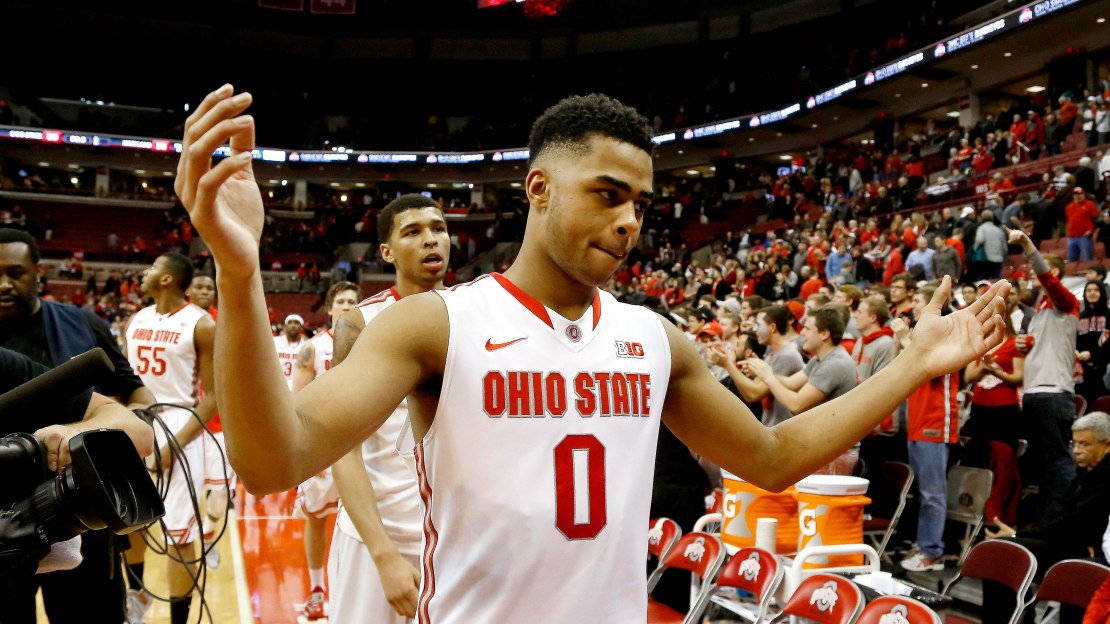 Russell, who leads Ohio State in both scoring and rebounding, has been honored as the conference's Freshman of the Week six times. Trimble has received the honor twice, along with Indiana's James Blackmon Jr. and Purdue's Vince Edwards.

Minnesota's Nate Mason and Northwestern's Bryant McInthosh have also received the honor once this season.

This brings up the question: How does this year's Big Ten freshman class compare to past classes?

I broke down the past five Big Ten freshman classes and compared them to some of the top newcomers in this year's class from a statistical standpoint.

Analysis: This is a solid group of freshmen, highlighted by Vonleh, who led the Big Ten in rebounding during his one season at Indiana. However, Vonleh was the only player on this list to rank among the conference leaders in either scoring, rebounding or assists last season. In comparison, this year's Big Ten freshman class has three players (Russell, Blackmon Jr. and Trimble) who rank in the top 15 in both scoring and assists this year.

Analysis: This group is loaded with talent, from top to bottom. Two of the players on this list are already in the NBA (Harris and Robinson III), while the other three will likely join them in a year or two. But if you look closely, this group really didn't excel until their sophomore seasons, at least from a statistical standpoint. The leading scorer in this group was Harris, who averaged 12.9 points per game during his freshman campaign, which ranked 15th in the Big Ten that year. In comparison, Russell and Blackmon Jr. each score more than 16 points per contest this season, while ranking second and fifth in the Big Ten in scoring, respectively. Hammons was a force on the boards and on defense as a freshman, just like he is today. He averaged 6.0 rebounds and 2.0 blocks as a freshman, while not a single freshman ranks in the top 15 in the conference in either of those statistics this season. On the other hand, Ferrell was the only freshman in 2013 to rank in the top 10 in assists, while Russell, McIntosh and Trimble all rank among the Big Ten leaders in assists this season.

Analysis: Sullinger is the star of this group. In fact, it could be argued that he was the best freshman in the Big Ten over the past decade. The former Buckeye standout ranked sixth in the conference in scoring (17.2 ppg), second in rebounding (10.2 rpg) and fifth in field goal percentage (.541). But after that, there was a significant drop off when it comes to this group of five. Hardaway Jr. was the next-leading scorer in the group, ranking 15th in the conference with a 13.9 ppg clip. Basabe came in at seventh in the Big Ten in rebounding as a freshman (6.8 rpg), while Craft's 4.8 assists per game ranked fifth in the Big Ten. This was a well-rounded freshman class, but this year's 2015 class has a huge statistical advantage over this group.

Analysis: This was a solid freshman class, but from a statistical standpoint, it was probably the weakest of the bunch. Watford was the leading scorer in this group, averaging 12 points per contest, which was good for 19th in the Big Ten. Watford was also the top rebounder in the group, pulling down 6.0 rebounds per game, which ranked 10th in the conference. Iowa's Cully Payne, who wasn't a member of the 2010 All-Big Ten Freshman Team, was the only freshman to rank in the top 15 in the Big Ten in assists in 2010. While this class had only one player rank in the top 20 in the conference in scoring and rebounding, and one in the top 15 in assists, this year's class has three players in the top 8 in scoring, one in the top 20 in rebounding and three in the top 15 in assists.