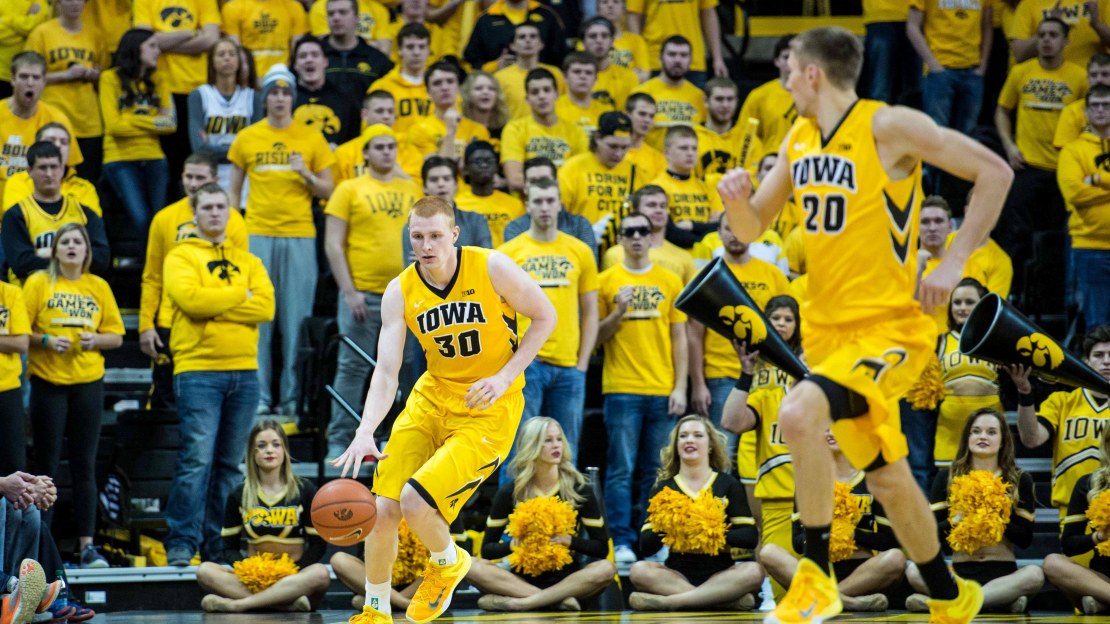 Those were the now famous words of Iowa coach Fran McCaffery after last weekend?s win vs. Maryland. McCaffery was asked in the postgame about yet another eye-poking incident by Hawkeye big man Adam Woodbury. And, McCaffery obviously didn?t like the question.

But I have an intelligent query: Who is the second-best team in the Big Ten?

Let?s not ask McCaffery for his response, just to be safe. But I have my own answer handy, and I?ll let you decide whether or not it?s intelligent.

Right now, the Big Ten picture is muddled once you get past first-place Wisconsin, which is threatening to run away with the league title with a 10-1 conference record. So, let?s go ahead and concede the championship to the Badgers. Ok? Ok. Start printing the T-shirts, plan the parade down State Street and commission a banner for the Kohl Center. The Badgers' excellence has become … well … boring. (Yawn.)

Six teams are clustered behind Wisconsin with four Big Ten defeats: Maryland, Ohio State, Indiana, Michigan State, Purdue and Iowa. Of all that six pack, I like the Hawkeyes (15-8 overall; 6-4 Big Ten) best. By March, America will have moved on from eye-poking jokes and Three Stooges references and focused on how good this Iowa team is.

You want quality wins? Check it out. Iowa has won at North Carolina, at Ohio State, at Minnesota and at Michigan. And it might have won at Purdue if White hadn?t of gotten hurt in the opening minutes. You won?t find a better collection of road triumphs in the Big Ten. Bad losses? There are none.

Then there is the talent, led by White, who averages 15 points and 6.6 rebounds. Is there any player in America who means more to his team? White is the glue guy, the guts and soul of the Hawkeyes. He?s an all-time great in my book. Give me 10 Aaron Whites and I don?t lose a game in anything … basketball, Gnip Gnop, Toss Across, Connect Four or Jarts.

There also is Jarrod Uthoff, Gabe Olaseni, Mike Gesell and Woodbury. The depth continues with Peter Jok, Anthony Clemmons and Josh Oglesby, who all average at least 19 minutes. This is a deep team.

"I think we're going to have to get Dom Uhl more minutes. We have to get Josh Oglesby back in the lineup," McCaffery said recently. "In this league, with the intensity of the games and the length of the season and the grind, you need more bodies."

It?s good to have options.

"You never know who's going to get in foul trouble," McCaffery said. "Who anticipated Aaron White getting a stinger in the first minute of the Purdue game? So other guys have to step in. Those kind of things are unforeseen and hopefully won't happen. But you better have nine or 10 guys ready in this league."

And then there is the schedule. No Big Ten has a friendly menu of games left down the stretch than Iowa. Lots of low-calorie fare.

Check it out below. I've listed the opponents' Big Ten records, as of Wednesday afternoon, too.

Of the eight games left, none are against runaway Wisconsin, which beat Iowa twice, and just two are vs. teams in the race for second place (vs. Illinois; at Indiana). Best of all, the eight teams have a combined combined 29-61 conference clip (.322).

I can see Iowa going at least 6-2 down the stretch, which would make the Hawkeyes 12-6 in the Big Ten.

Add it all up, and look for the Hawkeyes to emerge from a muddled pack to finish second in the Big Ten.