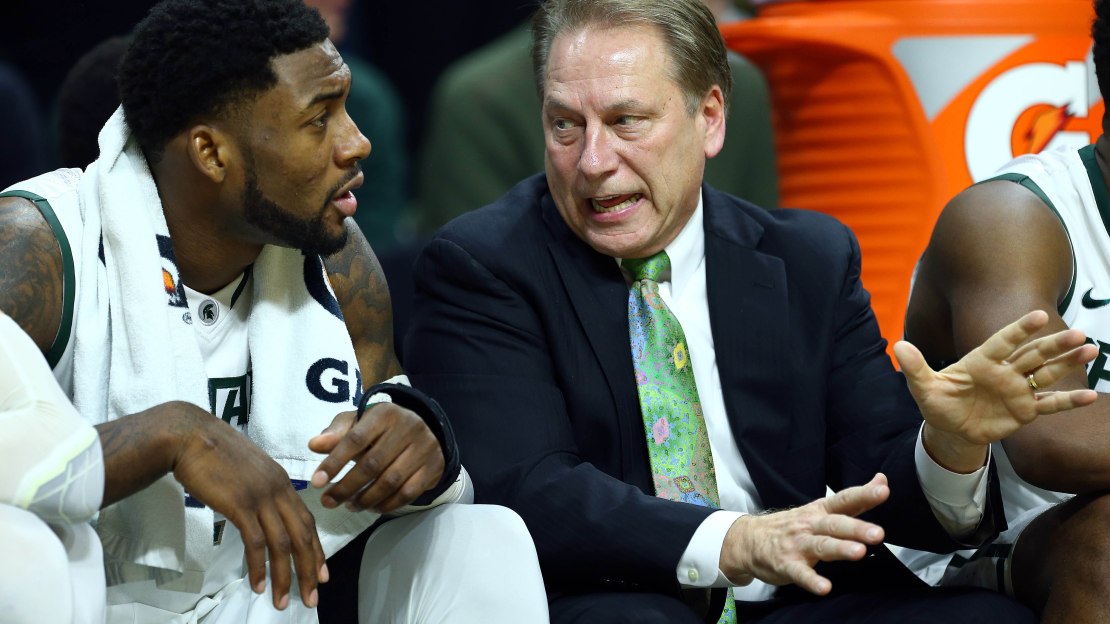 This eye-poking by Iowa?s Adam Woodbury is some of the most bizarre stuff I ever have seen in all my years covering and watching basketball. And Hawkeyes coach Fran McCaffery is front-and-center in the imbroglio.

McCaffery gained national attention with his terse handling of a postgame question over the weekend about Woodbury?s third eye-poking incident in five games. Fran felt the reporter?s query wasn?t ?intelligent.?

Why was Fran so peeved at a perfectly fair question that WAS intelligent? (Again, three eye incidents in five games. Is it THAT crazy to ask the coach ?what?s up??) Rick Brown of Hawkcentral.com reached out to McCaffery for clarification–and, didn?t really get much.

"Here's the thing," McCaffery explained. "The reason I was angry is that everybody keeps wanting me to comment on officiating when I can't. Now if my player's getting attacked for something, I can discuss that. But after a game I'm not going to get into officiating. I can't. It's against the rules. It's a major fine."

McCaffery said he's not concerned about being portrayed as a bully.

"I don't treat the media with disrespect," McCaffery said. "My brother's a member of the media. But when you keep asking me to comment on something that you know I can't comment on, I'm going to react that way. The reality is, you've got to know what you're asking me. I'll give you an honest answer."

Get all of that? Good. My two cents: McCaffery could have handled things better. No need to say if you think a question is ?intelligent? or not. And you can?t justify your answer by saying ?because I said so.? As for being portrayed as a bully ?

Now, the world watches and waits to see if Woodbury pokes any more eyes. How will McCaffery handle those questions? Will they be deemed "intelligent"? Meanwhile, Iowa looks primed to make a strong run to finish the season, in case you have forgotten.

After a 7-for-18 performance in a five-point loss to Illinois on Saturday, Michigan State is shooting 62.1 percent for the season, notes MLive.com. That's 330th in the country out of 345 teams and on pace to be the program's worst free-throw shooting performance since 1971-72.

"That's ridiculous, and I cannot sugarcoat that in any way, shape or form," MSU coach Tom Izzo said.

More bad Spartan news: Jevon Bess may be out the rest of the season with a foot injury.

"I don't like where it's headed," Izzo said. "He's definitely going to be out for a few weeks."

Bess wore a boot on his right foot as he sat out Saturday's loss to Illinois. He suffered a stress fracture in that foot shortly before the season started, and Izzo said the injury never fully healed.

Michigan has a quarterback transfer in John O?Korn from the University of Houston.

O'Korn threw for 3,117 yards, 28 touchdowns and 10 interceptions as a freshman at Houston in 2013. A year later, though, Houston lost offensive coordinator Doug Meacham for the same job at TCU, and things changed and he ultimately lost his job last season.

Looky here: The Cleveland Plain-Dealer is putting together an All-Decades high school hoops teams. Check it out.

As you would suspect, LeBron leads the way followed by Clark Kellogg.

Rutgers alum Mohamed Sanu, who makes his living catching passes in the NFL, recently worked out with Scarlet Knights starting QB hopeful Hayden Rettig, a transfer from LSU. And Sanu was impressed, according to NJ.com.

Asked if there is anything missing from Rettig's game, Sanu said: "I wouldn't say anything's missing. I'd say he hasn't played here yet. He's played at LSU. He has some experience there, but here it's a different team so we'll see how it goes."

About that fund-raising project at Minnesota for new athletic facilities ? the school president has no concerns about it. And that?s good. Check out this piece by legendary Sid Hartman on the subject.

School prez Eric Kaler said that while the project is being financed entirely by private donations, there is still the possibility that the athletic department could get a loan from the university to have 80 percent of the cost of the project raised to start construction on time.

?We?ll ultimately raise it all privately or with already-allocated money,? he said. ?If we need to bridge a loan to get going more quickly we?d be willing to look at that, but at the end of the day there won?t be tuition dollars or new state money in this.?

This is good news, as Minnesota sports needs this face-lift.

Penn State coach James Franklin accidentally Face-Timed with a fan. Check it out.

Hey, in case you haven?t noticed, Yogi Ferrell is climbing the career charts at Indiana. He?s primed to leave school thought of in the same breath as other IU legends.