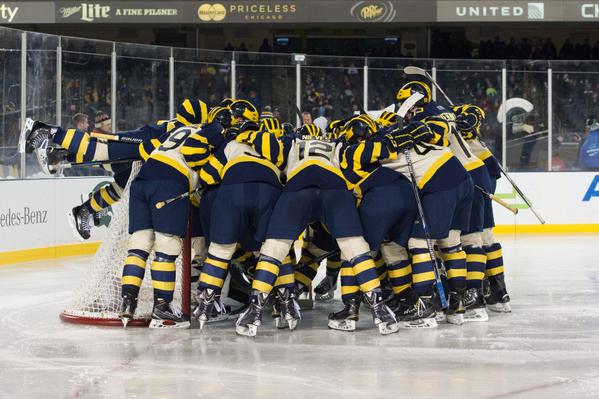 That's all she wrote folks, as Michigan beats Michigan State under the stars in Chicago #GoBlue pic.twitter.com/dZG7vceAYL

Michael Downing and Justin Selman each recorded one goal and one assist, helping No. 14 Michigan defeat Michigan State, 4-1, on Saturday night in the Coyote Logistics Hockey City Classic at Soldier Field.

Downing gave U-M an early 1-0 lead, beating Jake Hildebrand between his legs on a shot from the point. Tony Calderone and Cristoval 'Boo' Nieves assisted on the play, which came just 1:43 into the game. The Wolverines had a man-up opportunity with less than eight minutes left in the first period, but they did not take advantage. The Spartans outshot Michigan, 11-10, in the opening frame.

Cutler Martin increased the Wolverine lead to 2-0 after firing in a wrist shot just in front of the blue line with 6:44 left in the second period, and it proved to be the game-winner. Just three minutes later, Andrew Copp knocked in a rebound in front of the net to put Michigan up 3-0 heading into the second intermission.

Goaltender Zach Nagelvoort finished the night with 31 saves, and as a team Michigan blocked 18 shots. U-M outshot the Spartans, 37-32, and neither team scored on three power-play chances each. Nieves had two assists on the night, extending his point streak to four games.

Before we start the 2nd period, let's look back at Michael Downing's goal to give the Wolverines the early lead! http://t.co/AKUOwqssnN

CLIP: Cutler (Martin) embraces playing here at Soldier Field, and gives Michigan a 2-0 lead in this one. http://t.co/VSj9vhxzfZ

CLIP: Andrew Copp jams home a rebound in front of the net to send Michigan into the room up 3-0 after 2 periods http://t.co/883GEtQJRf