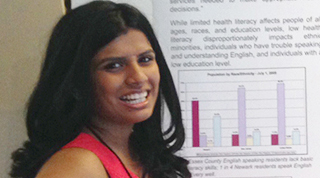 When she went to Rutgers New Jersey Medical School, Janki Shah knew she wanted to go above and beyond the conventional academic path to make a difference in the lives of others. That drive led her to start the Women?s Health Literacy Project, an initiative to get medical counseling and treatment for women and families in need.

?Part of the reason I chose the school itself was the community-volunteering opportunities,? the 24-year-old student said. ?I knew I really wanted to do that when I decided to go to medical school.?

It started two years ago at the Apostles? House, a nearby shelter in Newark, where she gave women guidance on health and wellness.

?That?s when I decided I wanted to do something with health literacy,? she said. ?When I went in there, I said, ?That?s a great place to do literacy sessions.??

Every woman in the shelter came to that first discussion. They all sat in a circle and talked about health issues for hours.

?The first night, I made my own list of topics I wanted,? she said. ?The first session went so well. We talked about HPV and cervical cancer. They said, ?Oh my god, I?ve never heard of this before.? Because so many of them have never had a regular doctor.?

Shah said it was an eye-opening experience to see just how little many of them knew about their health.

?We got a list of topics from them. They would say, ?I really want to hear about domestic violence and what shots my kid gets,?? she explained. ?I saw how little patients know about what we do for them. Even small things like taking their medication.?

Since then, doctors and residents at the shelter have gathered every other Wednesday to talk about issues affecting them. While she sensed it was important, Shah didn?t know that her idea would grow into a lasting program that provided critical advice to hundreds of disadvantaged women.

And it?s had an impact beyond benefiting women at the shelter. Shah?s project is now part of Rutgers? Healthcare Foundation Center for Humanism and Medicine, an organization dedicated to promoting compassionate patient care. As a result of the program at Apostles? House and the mission of the Center, Rutgers New Jersey Medical School now has formal service-learning requirements for all first-year students.

Though it was her idea initially, Shah?s project was able to thrive in part because of support she received through the Center.

?They kind of sponsored it,? she said. ?I went to them and said, ?Hey Dr. Wilson, this is what I want to do.? They were really supportive. He said, ?What do you need?? Any funding I needed, they were able to come up with it.? 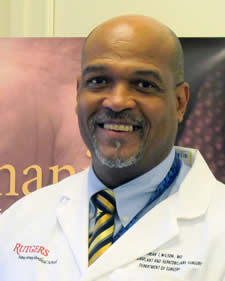 ?Dr. Wilson? is Dorian Wilson, a liver transplant surgeon who was tapped to serve as director of the Center when it was founded in 2004. And, fueled by his own deep belief in the organization?s mission, he?s been running it ever since.

?When physicians show their humanistic traits, the patients are happier, and they?re more compliant,? he said. ?The community ? has told us that they?re happier with the way doctors function. And doctors need to be more in touch with aspects of this type of care.

?We continue to find opportunities for enhancing things that are not mainstream technical medicine, but certainly add aspects to health and well-being,? he added. ?Typically, people don?t think of surgeons as humanistic. We?re the SOBs who throw things in the operating room. The Center is trying to help dispel that myth. That?s always [the] goal.?

Shah said she hopes her program can continue to grow even after she starts her residency following her graduation this year.

?I?ve been on a lot of residency interviews, and they ask what I?m most proud of,? she said. ?This [program] is my answer. When I came to this school, I wanted to do something that would carry on. It?s a cause that?s very near and dear to my heart. It makes me happy that it?s evolved.

?It?s definitely something that?s going to keep going,? she added. ?One of the things I would like to do before I leave is expand the project to other shelters. Do it on a larger scale. But I haven?t thought about what to do with that.?

But perhaps another young medical student can step up and take charge of the program. Wilson said there?s no shortage of candidates coming through his office.

?These students are way smarter and motivated than I was at their stage,? he said. ?They are so resourceful in making things happen. What I have told them all is to look for opportunities to grow their humanism. They?ve taken the ball and run with it.?