Rapheal Davis Q&A: 'We need to focus on the defensive end' 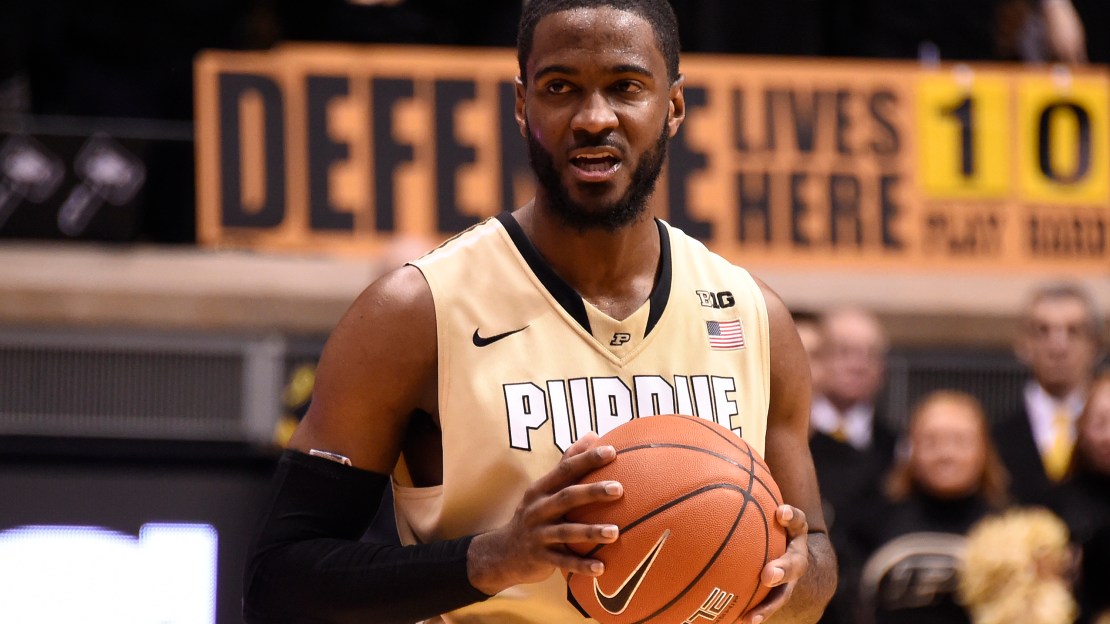 Back in December, things weren?t going well for Purdue. First came a home loss to North Florida. Then came a three-game losing skid that included another bad home loss, this time to Gardner-Webb.

Since then, the Boilermakers have had a reversal of fortunes by winning six of nine games to open Big Ten play. That has Purdue (14-8 overall; 6-3 Big Ten) in a tie for second place in the conference with a big game vs. Ohio State tonight. This is a chance for the Boilermakers-who finished last in the Big Ten last season–to stake a claim as the league?s second-best team behind Wisconsin.

Rapheal Davis has been a key cog in the Boilermakers? rise to relevancy. Beat the Buckeyes, and Purdue?s stock will continue to rise as it makes a push for the program?s first NCAA bid since 2012. Davis is a leader for this young team. The 6-5, 217-pound junior guard also is a key contributor, a versatile weapon averaging 10.8 points, 3.6 rebounds and 2.5 assists.

I caught up with Davis as he prepped to play the No. 20 Buckeyes.

Q: How big is the Ohio State game?
A: It will be big. They are ranked. Knowing it?s Ohio State. They have some good players. We need to protect our home court.

Q: What is your role on this year?s team?
A: My role is to be a leader out there on the court and off. Playing as hard as I can. I need to keep playing to the best of my ability. The guys look to me for leadership and to play as hard as I can and to give it my all and be a warrior on the court.

Q: What has sparked the team during this three-game winning streak?
A: Just guys getting back to playing hard and stressing the fundamentals, knowing that offense isn?t going to win a lot of games in this league. You have to play defense. You have to guard people and get stops, especially when shots aren?t falling. We haven?t been shooting well in recent games, but getting stops can push us to victory. We need to focus on the defensive end, not the offensive end.

Q: Prior to the win vs. Indiana last week-the team?s best of the season-many former players got in touch with players and the staff. What did that mean to everyone?
A: A lot of players called the coaches before the Indiana game, to offer words of encouragement-guys like E?Twaun Moore, Glenn Robinson, Troy Lewis ? guys who have been through it and who have been successful. Robbie Hummel contacted me, along with Travis Carroll, Dru Anthrop, D.J. Byrd.

Q: What would it mean to get Purdue back to the NCAA tourney?
A: It would be big. I have been committed to Purdue since my freshman year in high school. I have seen the glory days at Purdue with Coach Painter with Moore, JaJuan Johnson and Robbie Hummel. To get Purdue back to that level would be huge for me and the university. This is bigger than us. This is for our school and fans.

Q: Who is the best dunker on the team?
A: I would say Jon Octeus.

Q: If A.J. Hammons and Isaac Haas played a game of one-on-one to 10 buckets, who wins?
A: I am going with Hammons because he can spread him out and shoot some jumpers. You have to be able to handle the ball.

Q: If Matt Painter draws up a play to get a last-second shot to win a game, who is he drawing it up for?
A: I would say me. I feel like I am that type of leader, I want it to be on me if we win or lose a game. That?s me trying to be a leader.

Q: Burger King or McDonald?s?
A: I wouldn?t stop at either. But if I had to, it would be Burger King. When I was at prep school for a year, we ate at McDonald?s a lot and I got tired of it.

Q: You are a native of Fort Wayne, Ind. Who is the best player the town has produced?
A: I would say Walter Jordan. He played in the NBA after a good career at Purdue (in the 1970s).