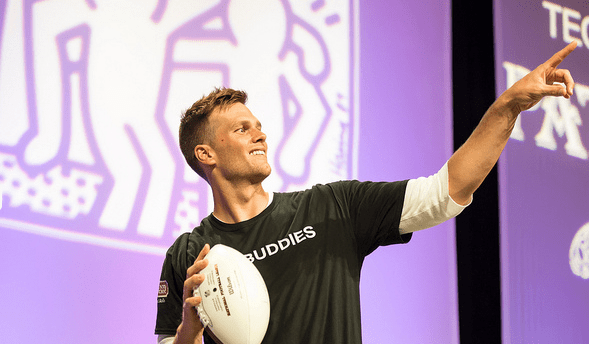 That?s the title of a profile in The New York Times Magazine issue that went out to print subscribers today. It?s a great description of the New England Patriots quarterback and University of Michigan alum who will lead his team tonight in the Super Bowl for the sixth time in his 15-season career.

As the headline would indicate, the article - which is worth reading in its entirety - explores some of the ways in which Brady can?t stop: his commitment to physical upkeep, his study of the game and his obsession with winning.

What it didn?t go into was one of the most important things that keeps Brady going in the offseason: his philanthropic work. However, the story did touch on how Brady views helping others, whether it?s his teammates or people who simply haven?t been afforded as many advantages in life. His outlook on this has been heavily influenced by Alex Guerrero, his personal trainer, spiritual counselor and close friend.

?He shares with me a word he learned in Sanskrit, ?mudita,?? wrote Mark Leibovich, the magazine?s chief national correspondent. ??It?s like, fulfillment in seeing other people fulfilled,? Brady says.?

For more than a decade, Brady has found fulfillment in supporting Best Buddies International, an organization that helps people with intellectual and developmental disabilities by pairing them up in one-to-one friendships with volunteers and providing them with educational and professional opportunities. It impacts approximately 700,000 people in all 50 U.S. states and on six continents every year, with programs in more than 1,500 middle schools, high schools and college campuses internationally.

[btn-post-package]?Best Buddies is an important organization with a great message to share, and I am so proud to support their work,? Brady said in an interview last year. ?I hope my role as Honorary Co-Chair will continue to bring attention to the organization?s mission of friendship and inclusion for people with intellectual and developmental disabilities across the world.?

Read previous BTN LiveBIG coverage of Brady?s support of Best Buddies. Also, check out BTN LiveBIG?s article on Russell Wilson, a University of Wisconsin graduate and the other starting quarterback in tonight?s game.