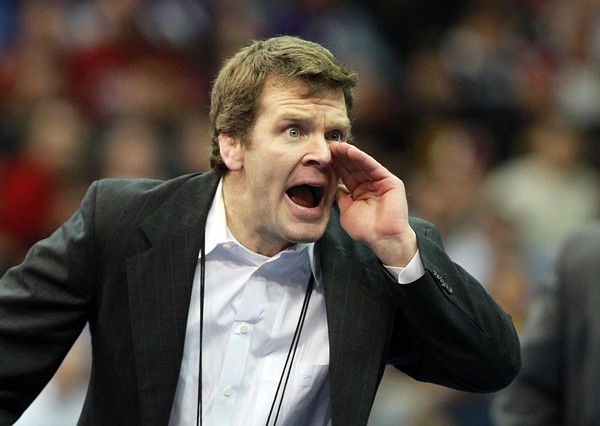 How often do you get a chance to see the top two teams in the nation square off in a regular season wrestling dual?

That will be the case on Friday as the top-ranked Iowa Hawkeyes and second-ranked Minnesota Golden Gophers, both 10-0, will face off in a highly anticipated dual at 7 p.m. ET Friday on BTN (watch on BTN2Go).

Q: Tom Brands was quoted as saying, ?I don?t know if it gets much better than this,? in regard to this matchup. Just how big is this No. 1 vs. No. 2 meeting?

A: It's always one of the most anticipated duals on the college wrestling schedule. This also marks the 100th meeting between these two national powers with Iowa holding the advantage, 70-28-1. Of the 20 projected starters, 18 are ranked in the top 17 in the country, with 14 ranked in the top 10 and 11 in the top five. The winner will put itself in the drivers seat for the Big Ten dual meet championship and individual winners will position themselves for a better seed at the highly contested Big Ten championships in March. This is a huge match!

With both teams being undefeated and a No. 1 vs. No. 2 matchup, this battle is set up to be a classic. Expect a packed house at Williams Arena with high energy and intensity. It's also senior night for Minnesota, and you can bet those five Gopher starters would enjoy nothing more than going out with a victory over rival Iowa. The stakes are high and nights like this are what die-hard wrestling fans live for.

Q: Eight of the 10 bouts will feature ranked wrestlers. Which one are you most excited about, and why?

A: I'm most excited about 174 pounds with Iowa's No. 2 Mike Evans and Minnesota's No. 4 Logan Storley. Evans has won a career-high 18 straight matches while Storley is coming off a tough loss to Penn State's Matt Brown. Storley has won three of four career matches against Evans, but the Hawkeye did win in their last meeting during the dual in Iowa City last year. Another match I'm really looking forward to is the battle at 133 pounds between the Gophers top-ranked Chris Dardanes and the Hawkeyes No. 5 Cory Clark. Clark bumped up to 133 pounds this season after earning All-American honors last season at 125, while Dardanes is down from 141 pounds. Burak and Schiller at 197 will also be a big-time match.

Q: Both teams are 10-0, so does either enter the dual with more momentum or a bigger chip on its shoulder?

A: I really don't think so. I think both teams feel good about where they are and look forward to competing in these kind of matches in these environments. Iowa has been more dominant in duals, while Minnesota has grinded its way to a few hard fought wins. This dual has been unpredictable the past couple years and has five or six matches that could go either way. Both teams have a clear understanding of what is on the line from both a team and individual standpoint.

A: I believe if Iowa wins they will run the table. It will be a stiff test at Penn State, but I feel the Hawkeyes have the more veteran, balanced line up. If Minnesota wins, then the Gophers still have a really tough test at Ohio State that could go either way. If Ohio State wins, we would have a three way tie for the title.

A: What a tough question. If this match was wrestled 100 times it truly could go 100 different ways. It's tough to call. Who wins those ?toss up? matches and who steps up and scores bonus points? One thing is for certain: Every single point counts! Little things win big matches and that will be the case on Friday night.

I would give Iowa the slight edge because of 125 pounds and 149 pounds with Gilman and Sorenson. I keep finding myself going to that match at 174 with Evans and Storley. I think if Iowa gets a win from Evans, the Hawks will have enough to leave town with a victory. Minnesota has to avoid bonus points in the matches where they are underdogs. The Gophers need wins from the Dardanes twins at 133 and 141. They also need Storley (174) and Schiller (197) to bounce back from losses at Penn State. Dylan Ness always seems to step up big in these kind of situations. This is going to be a great match. Like last year when Sam Brancale pinned Thomas Gilman to start the dual, this match could be decided by something that nobody saw coming. These are the kind of nights when legends are made and legacies are cemented. Don't miss it!