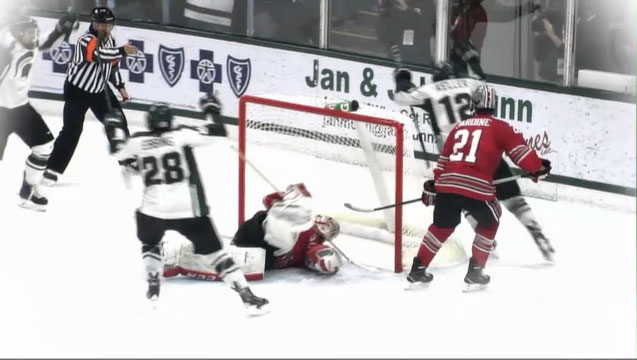 It was another busy Big Ten hockey weekend as the Wolverines extended their seven-game win streak against Wisconsin while Michigan State earned their first sweep of the season against the Buckeyes. Here are the scores from the weekend:

We have another rivalry weekend coming up as Michigan and Michigan State go head to head and Minnesota takes on the Badgers again. Here?s a preview to get you up to speed on the upcoming games.

No. 13 MICHIGAN VS MICHIGAN STATE
When: Friday, Jan. 30 at 7:30 p.m. ET
How to watch: Friday?s game airs live on BTN2GO and Fox Sports Detroit
Players to watch: Michigan State?s Ryan Keller has been a hot scorer for the Spartans as of late as he?s scored 3 goals in the past four games. Spartan forward Matt Berry is back on the team and also had a solid series over the weekend with a goal and two assists. Michigan?s Zach Hyman continues to play possessed offensively. He leads the team with a seven-game goal scoring streak (9G, 9A). This is the longest streak since Brendan Morrison (1995-96) who had an eight-game goal streak.
The latest on the Wolverines: After a sweep against Wisconsin last weekend, Michigan boasts their longest win streak since 2011 with 7 victories. They?ve also netted 52 goals in eight Big Ten conference games. Michigan is third in the nation with an average of 35.14 shots/game.
The latest on the Spartans : Michigan State earned their first sweep of the season after taking down the Buckeyes last weekend. With a six-point weekend, Michigan State climbed past Minnesota into third place in the Big Ten with 13 points and a 3-3-2-2 record.
In summary: The Spartans and Wolverines last met in late December for the GLI finals at Joe Louis arena as Michigan won 2-1. They meet again under different circumstances, but the stakes remain just as high for bragging rights amongst both teams. Michigan?s lethal offense will be tested against a solid Michigan State goaltender in Jake Hildebrand.

MINNESOTA AT WISCONSIN
When: Friday, Jan. 30 at 9 p.m. ET; Saturday, Jan. 31 at 8 p.m. ET
How to watch: Friday and Saturday?s game will air live on BTN/BTN2Go. Here are the links for Friday's game and for Saturday's game.
Players to watch: Wisconsin?s Grant Besse scored in his third-straight game after Friday night?s performance and leads the team with seven goals. Minnesota?s Travis Boyd steps up when facing the Badgers. Last they met, Boyd had three points (2G, 1A) in their 5-2 victory over Wisconsin. Boyd leads the Big Ten with four game-winning goals this season.
The latest on the Gophers: Minnesota lost two straight games in the North Star College Cup after falling to the top-ranked Mavs last Friday night, and No. 7 Minnesota Duluth Saturday night. The Gophers are 2-2-2-0 in Big Ten play. They have lost five of their last seven games since the beginning of January.
The latest on the Badgers: Wisconsin was swept over the weekend on their home ice after falling to Michigan last Friday and Saturday. Badger defensemen Eddie Wittchow returns back to the lineup after his two-game suspension for his controversial hit to the head against Minnesota two weeks ago.
In Summary: Wisconsin managed to pull the tie against Minnesota in their last meeting just two weeks ago, now they return to their home ice to conclude the Border Battle. An upset for the Badgers is not out of the realm of possibilities as Minnesota is vulnerable with a 3-5-1 record since Jan. 2.