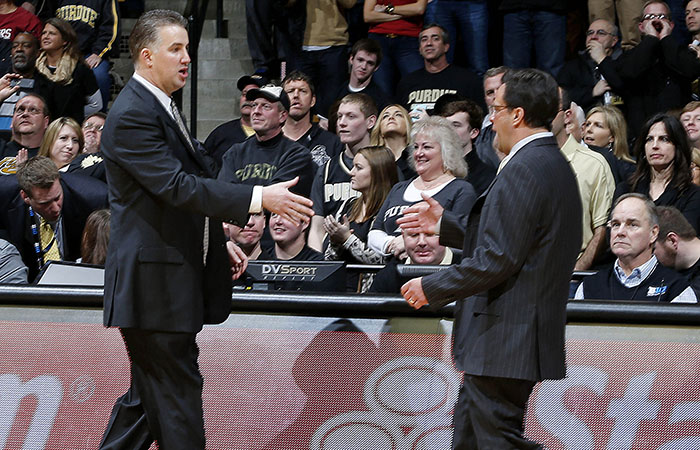 When Indiana and Purdue are at their best, few rivalries can top it.

In recent years, more times than not, it's been a case of one team being at its best and the other, well, not so much.

Purdue leads the heated series 113-88, although Indiana has won four of the last five.

The two rivals square off at 9 p.m. ET tonight at Mackey Arena on BTN. (watch live on BTN2Go).

To preview the game, I caught up with a pair of former Hoosiers (A.J. Guyton and Will Sheehey) and a Boilermaker (Ryne Smith) to get their thoughts on the special rivalry.

Guyton, the Big Ten Freshman of the Year in 1997 and the Big Ten Player of the Year (media) in 2000, was involved in some classic Bobby Knight-Gene Keady matchups, including several with both teams ranked.

"Purdue was really good during my time at IU," Guyton said. "I have great respect for Coach Keady and what he was able to accomplish at Purdue."

Guyton and Indiana got the best of Keady and Purdue several times during his standout career, including one particularly special triumph.

"My favorite memory is my senior year on senior night we beat Purdue and ruined its chance to share the Big Ten title. The night was special because everyone played well, and the place was electric. I finished my final home game as a Hoosier with a win against a good Purdue team, which comes second only to a national championship!"

Sheehey, who just graduated last year, went 4-3 vs. Purdue, and had a hand in couple historic efforts in the series.

"My favorite part of the rivalry had to be the fact that Purdue cares way more than IU," Sheehey said. "You could tell that it was their Super Bowl and meant a lot to their fan base. The way they chant 'IU Sucks!' at every game regardless of who they play, it's kinda awesome. I respect it."

"My favorite memory is absolutely winning in Assembly Hall," Smith said. "Doesn't matter which time, it is always the best winning in their place. It's so loud in there and when the clock hits 0 when you win, you can hear a pin drop. No better feeling than that."

Smith has an interesting story about the rivalry, too, due to his older sister, Nikki, having played for Indiana.

"The rivalry is great because the hatred, whether real or playful, between fans makes it great," Smith said. "My first experience with the rivalry came at my sister's senior night. She announced that even though I was going to Purdue, she still loved me. I was booed by the entire crowd before I even put on a Purdue uniform. That's when I knew it was real!"