Big Ten Mailbag: How good is Indiana basketball this year? 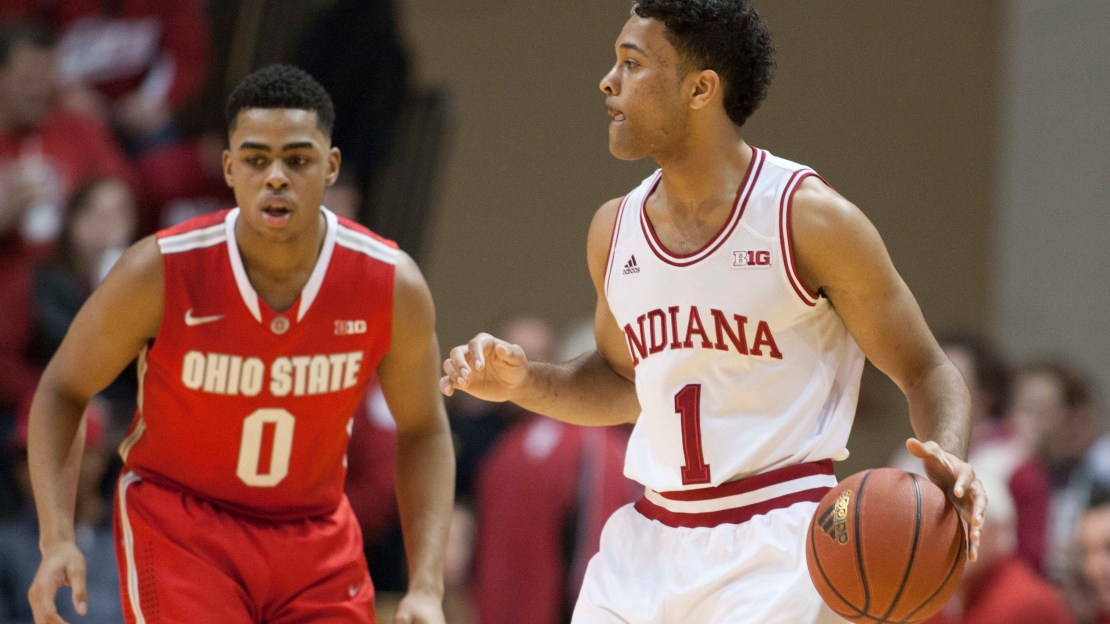 You have questions. And, of course, I have answers. See how this works?

Lots of football queries ruminating throughout the minds of Big Ten fans. Can Nebraska win the West? What does Minnesota need to improve on to win the Big Ten? There are some hoops, too.

How good is Indiana this year? – Fred

Tom Crean?s squad has been a surprise so far, sitting at 5-2 in the Big Ten and within striking distance of first-place Wisconsin, which is 6-1. What Indiana lacks in size and rebounding it compensates for with a quick, guard-centric lineup led by Yogi Ferrell. The Hoosiers have limited turnovers, for the most part. And when it shoots well, IU is difficult to beat. This may just be a tourney team, which I didn?t think was possible back in October. Big games loom at Wisconsin and at Maryland, along with season-closing visits from Iowa and Michigan State.

Will Nebraska be able to compete in the Big Ten West without Abdullah, Bell, and Gregory and with new coach Mike Riley? – Cade

That?s an affirmative. Riley will have plenty of talent to work with. The offense will have QB Tommy Armstrong, RB Imani Cross and WR Jordan Westerkamp, among others. The defense is loaded with two stud tackles in Vincent Valentine and Maliek Collins and a raft of veteran linebackers like David Santos and Josh Banderas. And Nathan Gerry is a stud safety. The bottom line: Nebraska could win the West in 2015.

How was Devin Gardner "miscast" as a QB when he was recruited as a QB and was the best QB at Michigan last year? Lord forgive me for saying this, but DG would have been an awesome QB with Urban Meyer coaching his team. – BHJ

Did you watch Gardner play? The guy often froze when it came to making a decision. He too often forced things, trying to make the big play. And turnovers ensued. Maybe a different set of coaches would have made a difference. But he just seemed to lack the requisite skill set for the position. And he had myriad chances to prove otherwise. If Gardner is such a hot quarterback commodity, why isn?t he projected as such in the NFL draft?

The East is so much tougher than the West — is it possible the B1G will reconsider alignment at some time? – Alan

This has been a popular question, but the same answer remains — the Big Ten will not realign. The league just did this, moving from a configuration that favored competitive balance over geography. The overriding sentiment was to dump that concept-along with the Leaders and Legends monikers-and opt for a geographic configuration. While the East looks stronger than the West-what with Ohio State, Michigan State, Penn State and Michigan-the West will have years when it is superior. But, like many, I feel the East will be the stronger of the two divisions in most seasons.

How much of a drop-off will there be in Ohio State's quarterback play going from Tom Herman to Tim Beck as QB coach? Or will there be any, since Urban Meyer is there? Also, will the offense take a step back with Ed Warinner and Beck now in charge (versus Herman/Warinner in past)? – Joanna

Beck did a nice job at Nebraska with his quarterbacks, grooming Taylor Martinez and Tommy Armstrong. Beck knows how to play to a signal-caller?s strengths. And he will do the same in Columbus, whoever ends up taking the majority of the snaps in 2015. The Huskers were No. 3 in scoring last year (37.8 ppg) and No. 4 in offense (452.3 ypg). Pretty good. Offense rarely was an issue in Lincoln under Bo Pelini.

What do you think Minnesota needs to become a real contender for the Big Ten title? I think the Golden Gophers need more than an average passing game (quarterbacks and receivers). That, until resolved, will keep them just wishing. – Dick

I think you are spot on. In 2014, Minnesota was second-to-last in the Big Ten in total offense (343.3 ypg) and scoring (25.7 ppg), and last in passing (148.1 ypg). Last season, the Gophers were No. 6 in scoring (28.4 ppg), No. 9 in total offense (357.5 ypg) and No. 13 in passing (141.8 ypg). Jerry Kill made defense and special teams higher priorities when he arrived. And those units have been good. The offense finally has been getting upgrades and improving in recent years, as more talent is funneled to that side of the ball. It?s all part of Kill?s master plan. Give it time.

Are you picking Rutgers for last in the Big Ten East again this year? – Phil

Possibly, but I think Indiana probably will be the selection by most in the preseason to finish last in the East. The Scarlet Knights will miss quarterback Gary Nova but have some good running backs and top wideout Leonte Carroo back. But they have the makings of a defense that should be better. I like the d-line with Darius Hamilton and Kemoko Turay coming back. IU has more work to do on defense-and also lost stud running back Tevin Coleman, but I like the Hoosier offensive line better than RU?s blockers.

You should have had former Iowa cornerback Micah Hyde on your Big Ten All-NFL Team. – Clinton

Yes, he would have been a good choice. Other readers piped up saying I should have included former Rutgers corner Devin McCourty and ex-Purdue defensive end Ryan Kerrigan. Look, there are only so many spots. The only positions that I struggled to fill were running back and receiver. Otherwise, I had many good candidates.

Are you finally off the cheerleading squad for Iowa? – Keith

What? I have to turn in my black-and-yellow pom-pons? Chuck Long will be bummed.