Big Ten Whiteboard: A lot to like about Maryland at Ohio State 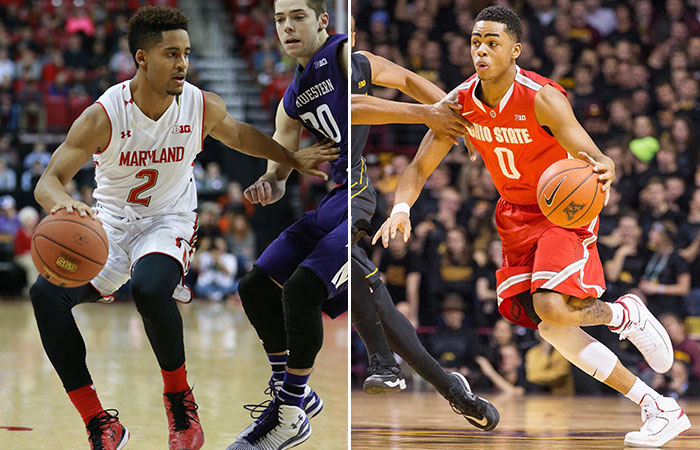 The Badgers (6-1) are one-half game ahead of Maryland (6-2), which recorded a thrilling comeback win vs. Northwestern on Sunday night. More on that later.

Here is a look at what?s coming up this week.

GAME OF THE WEEK: Maryland at Ohio State, Thursday. The Buckeyes are rolling a bit, winning two in a row including an emphatic triumph vs. then-No. 23 Indiana on Sunday. It was OSU?s best win of the season. The Terps have to feel a bit invincible after pulling out a heart-stopping comeback win in the final seconds Sunday night vs. Northwestern. Maryland has won at Michigan State and Purdue so far. The loser of this game will have a tough time staying in the Big Ten title chase.

DON?T OVERLOOK THIS GAME: Indiana at Purdue, Wednesday. This always is a fun matchup, one of the most heated rivalries in the Big Ten. However, the game has lost some luster with the struggles by the Boilermakers in recent years. But this meeting in Mackey Arena will carry some meaning. The Hoosiers already have won at Nebraska and at Illinois. IU needs this victory to stay in the thick of the Big Ten race. The Boilermakers need all the polish they can get on a resume that isn?t glowing. Beating Indiana would be a nice feather in the hat of Matt Painter?s squad, which just beat No. 25 Iowa at home last weekend. Any faint NCAA hopes Purdue possesses may be on the line.

MUST WIN: If Maryland is a legit contender in the Big Ten, it must find a way to grind out a win at Ohio State on Thursday. The Terps already have lost on the road at Illinois and at Indiana, while winning at Michigan State and at Purdue. And that win vs. NU on Sunday has upped Maryland?s mojo. The Buckeyes have an array of offensive weapons and are tough to beat at home. The only team to win in Columbus this season has been Iowa.

BEST INDIVIDUAL MATCHUP: The clash between freshman sensations Melo Trimble of Maryland and D?Angelo Russell of Ohio State in Columbus on Thursday will be fun. It could go a long way in determining the Big Ten Freshman of the Year, too.

UPSET ALERT: Iowa will be looking to exact revenge on Wisconsin when the Badgers visit Iowa City on Saturday. Last Tuesday, Wisconsin ripped the Hawkeyes by 32 points in Madison. Iowa needs some good mojo after losing two games last week to fall from the top of the Big Ten chase. Wisconsin is the lone Big Ten team with just one conference defeat.

BIG WEEK: Nebraska. The Cornhuskers were energized by a two-point home win vs. Michigan State on Saturday. Can they build on it? Nebraska plays two road games this week, at Michigan on Tuesday and at Minnesota on Saturday. At the least, Nebraska needs a split. A sweep would make Nebraska a factor in the Big Ten race.