The recent hacking of U.S. Central Command?s Twitter (@CENTCOM) and YouTube accounts demonstrated that cyberterrorism is a very real threat. Fortunately, it?s a very well-researched one, too, thanks in part to the work done by the National Strategic Research Institute (NSRI) at the University of Nebraska.

One thing?s for sure: Small organizations and individuals with no loyalty to any government will continue to exploit weaknesses. We?ll almost certainly see more of these kinds of attacks that attempt to undermine political, military and business institutions. It?s a public-facing opportunity for them to distribute their own propaganda, said Bob Hinson, founding executive director of NSRI. 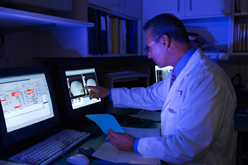 To date, the NSRI hasn?t put much of its focus on social media hacks specifically, but they have studied various novel and evolving national-security threats and recommend deterrence strategies.

The organization was founded in 2012 when the U.S. Strategic Command (USSTRATCOM) recognized the University of Nebraska?s long-standing commitment to combating cyberterrorism and weapons of mass destruction (WMD) proliferation. It?s only one of 13 University Affiliated Research Centers in the United States created in partnership with USSTRATCOM and the Department of Defense.

?Researchers and faculty have specialized in the study of violent extremist organizations and ably attached University of Nebraska expertise in cyber technologies to provide a very detailed assessment of the convergence of cyberspace and cyber WMD pathways,? Hinson explained.

[btn-post-package]The Institute is divided into five research and developmental areas: chemical and biological weapons detection; consequence management; medical passive defense against WMDs; nuclear detection and forensics; and space, cyber and telecommunications law. University of Nebraska faculty, students and alumni on all four campuses have been involved with NSRI projects.

In the future, Hinson expects NSRI to spend a great deal of time and energy on new sensor technologies that can assist warfighters, first-responders and others if and when they?re faced with unpredictable and potentially devastating WMD attacks.

?Weapons of mass destruction present a grave threat to the American public,? Hinson said. ?There are boundless opportunities to stay ahead of adversaries who would use WMD to accomplish their goals. The cutting-edge research taking place at the University of Nebraska is helping to keep that threat to a minimum.?