Illinois basketball student manager gets promoted to the team roster 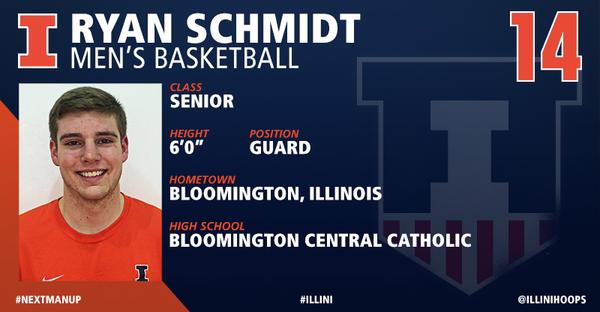 It is no secret that Illinois' men's basketball team has been hit with multiple injuries this season. After every injury, head coach John Groce has used the "next man up" mantra.

Schmidt, who is in his fourth year as a team manager, will dress for the Fighting Illini when they travel to Minnesota on Saturday for a Big Ten clash.

Following injuries to Tracy Abrams, Rayvonte Rice and Aaron Cosby, Illinois is extremely thin when it comes to depth in the backcourt.

Take a look at Schmidt's MaxPreps page. The popular high school sports site ranks Schmidt as the No. 217 prospect in the state of Illinois in 2011, as well as the 4,532 prospect in the nation.

Mark Morris, who is the Director of Basketball Operations at Illinois, posted the following photo of Schmidt, who was the first player out on the court at today's practice.

Any guess on who was the first to @IlliniHoops practice today? Yup, @Schmidty_3. #hyped #Illini pic.twitter.com/A88KU1gFn8

This is a great story. Well done, Illinois!