Q&A with Frank Kaminsky: Catching up with the Badgers' big man 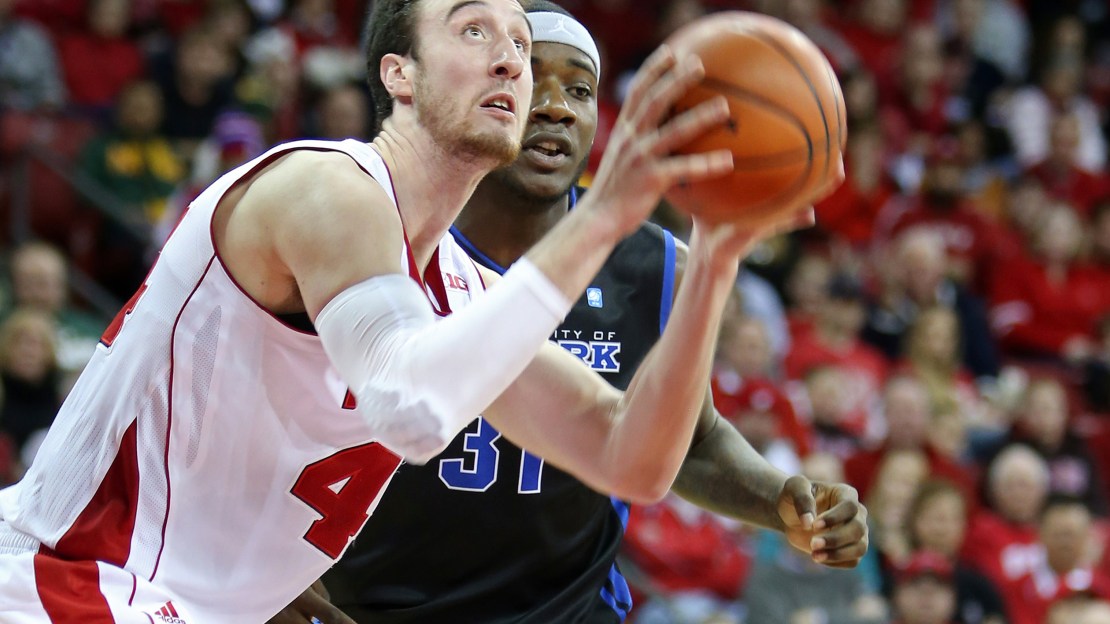 Frank Kaminsky and Wisconsin are rolling. But, it?s supposed to be that way.

Even with star point man Traevon Jackson out with a foot injury, the Badgers (17-2 overall) sit tied atop the Big Ten with Maryland with a 5-1 record, coming off a 32-point demolition of visiting Iowa over the weekend. (The only losses have been against  Duke and at Rutgers.)

Kaminsky has been the king pin, strutting his stuff against the Hawkeyes with 13 points and 11 rebounds. He ranks fifth in the Big Ten in scoring, averaging 16.9 points. And he?s No. 2 in rebounding with an 8.2 average to go along with 4.2 assists per game as he hopes to lead Wisconsin back to the Final Four. The 7-foot, 242-pound senior from Lisle, Ill., is a do-it-all stud who is living up to his billing as preseason Big Ten Player of the Year.

I caught up with Kaminsky as he and the Badgers prepped for a visit to Michigan on Saturday.

Q: After enjoying a break season last year, do you feel like a marked man?

A: Obviously, more so than last year. But I wouldn?t say I am more marked, but our team is after the success we had. But there is a different feel this season.

Q: Are you seeing defenses designed to stop you?

A: I definitely am seeing a lot more double-teams than I did in the past. But that is opening up stuff for other people on our team. We kind of invite that change in defenses.

Q: How have you gotten better?

A: I think I am reading defenses better than I did last year. Last year, I got myself into some tough spots on offense and defense, just not really understanding where I needed to be. I was able to watch film and learn from last year. I think I am handling the ball better and am in more control when I drive into the paint.

Q: Did you work with anyone in the offseason to enhance your skills?

A: I have some people I work with back home over the summer when I am there for a month.

Q: Are you getting any hecklers when you visit opposing arenas?

Q: Who is the best player you have gone up against this year?

A: (Duke?s) Jahlil Okafor is the best. He?s a one-of-a-kind type of guy. He is big for the college game and can control his body well so well. He has an advanced post game for his age. You don?t see it that often in college from a young player like him.

Q: Who is the best player on Wisconsin that no one talks about?

A: I would say Josh (Gasser). He does so much for our team. He shoots the ball at such a high percentage. He gets overlooked among me, Sam (Dekker) and Nigel (Hayes) sometimes. He is the glue piece that holds everyone together.

Q: Is there something about Bo Ryan we don?t know?

A: A lot of people may not know he has a very comedic side to him. When you see him in games, you think he is all serious all the time. And he usually is. But he actually has a pretty good sense of humor.

Q: I have to ask you about the eye-poking in the Iowa game by Adam Woodbury. What was up with that?

A: I think too much is being made of it.

Q: Who is the toughest player on the team?

A: Josh. He is Captain America. I would take him with me nine out of 10 times in just about any situation. He?s the guy I would bring home for dinner or have along to help me take a test.

Q: When you go to State Street Brats, do you go with the red brat? Or the white brat?

A: The red. Things that are white kinda creep me out.

Q: Where do you like to eat at on State Street?

A: There are so many good places. My favorite is Tutto Pasta. I am a big fan of Italian food. I usually get pasta Alfredo with some chicken in it or chicken parm. I try to mix it up. It depends on what I am in the mood for.

A: "Family Guy." I have seen every episode of "Family Guy probably more times than I should have. My favorite character is Stewie. He is the funniest.