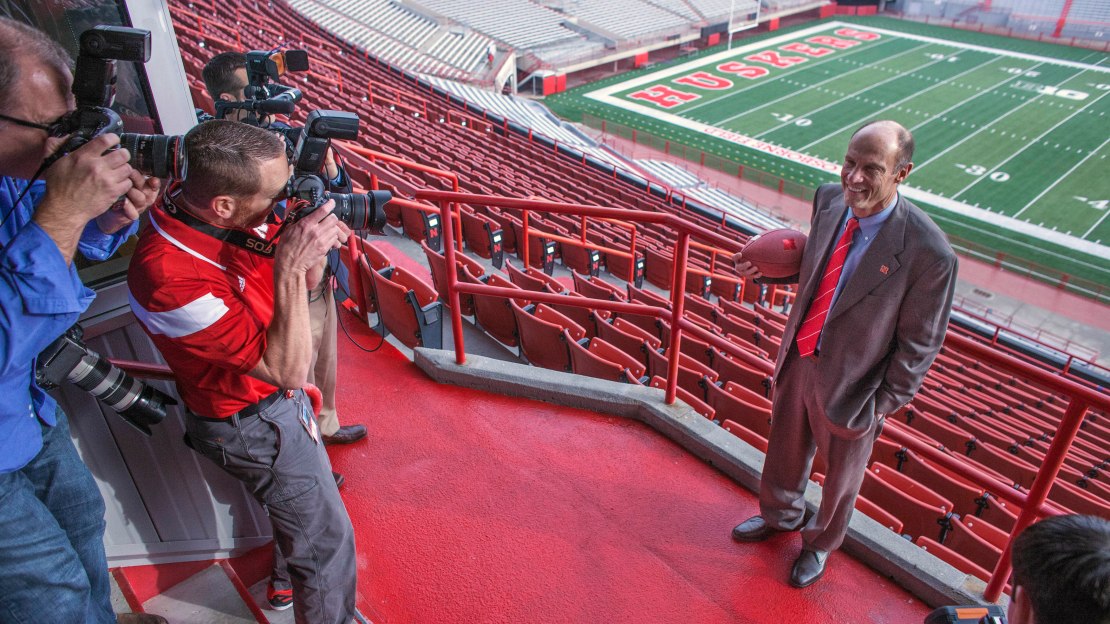 Time for me to reach into my mailbag. Yes, the football season is over. But many of you still have the gridiron on the mind. That's OK. I do, too. Let?s dig in to your queries.

With the coaching change at Nebraska-Bo Pelini out; Mike Riley in–when do you think the Huskers will challenge for the Big Ten title? – Jeffrey

RB Ameer Abdullah, DE Randy Gregory and WR Kenny Bell are gone, but new coach Mike Riley will inherit a team that has some talent. In fact, I wouldn?t be shocked if Nebraska won the West (but I think Wisconsin will be the favorite). Winning the Big Ten may take more time for Nebraska-and all of the teams in the West. The East looks loaded with the like of Ohio State, Michigan State and Penn State. Plus, Michigan figures to get rolling under Jim Harbaugh.

I am glad to see the Hawkeyes get the credit they deserve. I think that Coach McCaffrey has finally instilled the will into them to the point where they know how to close out games. I really hope they keep it up. – John

McCaffery has his Iowa team playing well. The program had a bit of a breakthrough last season when it made the Big Dance, but the team scuffled down the stretch. This Hawkeyes squad is playing better and learning how to finish games. I am surprised to see Iowa at the top of the conference. The next five games will be telling: at Wisconsin; at Purdue; Wisconsin; at Michigan; Maryland.

I would hope so. Neither Austin Appleby nor Danny Etling has done much to sew up the job. Blough is a touted prospect who did well while redshirting last season. Purdue needs better production from this key spot. The inconsistency threatens progress as Darrell Hazell enters his third season. Without better player under center, the Boilermakers have no shot. But I wonder if coaches-knowing they need to show some tangible progress in 2015-will entrust the QB spot to a neophyte.

How many years in a row does Minnesota need to beat Nebraska before they earn respect? Nebraska has the name. However, these weren't upsets the last two years. The Gophers were the better team. Nebraska gets a new coach and is in transition. Minnesota is stable under Jerry Kill. However, you still see Nebraska as the better team in your early look at 2015 standings. You're losing credibility. – Lucas

Yes, Minnesota has beaten Nebraska the last two seasons. I love what Jerry Kill is doing in the Twin Cities. But past performance has no bearing on future performance. I still think the Huskers have more talent than the Gophers-and will each season until the end of the earth. Nebraska?s issues in recent years weren?t a function of talent. And, I?ll just leave it at that. I?m just not ready to pick Minnesota over Nebraska.

Now that Joe Paterno got his 111 wins restored, when will his statue be re-installed at Beaver Stadium? – Mike Bradley

I have a feeling the statue will be resurrected at some point. Is that a good thing? A bad thing? You can talk among yourselves about it.

Surely, the selection of Christian Hackenberg to your BIG postseason team was a joke. His stats against an unranked BC team were good, but Jones played better foes in Alabama and Oregon and excelled in leading the Buckeyes to the national championship. Plus, Jones was the MVP of the Big Ten title game. You should be embarrassed for the selection of Hackenberg over Jones. – Richard Hite

For some reason, people seem to forget that Hackenberg worked behind a line all season that could best be described as ?porous.? He was running for his life most of the time. On top of that, he was working with an overhauled receiving corps that was led by a true freshman. I wonder what Hackenberg would have done working with Ohio State?s talent last year. And how would Jones have fared working with Penn State?s offense? As it is, Hackenberg hit 34-of-50 passes for 371 yards with four TDs and no picks in the win vs. Boston College. I don?t think he has to apologize for those numbers. Adding to those credentials is the fact he rallied his team to the game-tying field goal with 20 seconds left and then led Penn State to victory in overtime as essentially a one-man gang. Enough said.

Who ya got in a Tim Miles vs. Tom Crean cage match? – Bob Jones

Yes, the two passionate coaches had a bit of a dust-up this season. If I had to pick one, I?d take Crean. I just think he?s a bit tougher-and would stop at nothing to gain an edge.