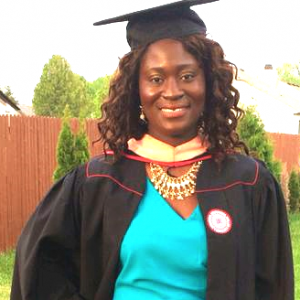 Armed with an unwavering commitment to help those in her home country - as well as three degrees in public health and education from Indiana University - Tiawanlyn Gongloe is helping prevent the spread of the Ebola virus as part of Liberia?s Ministry of Health.

Gongloe was born in Grand Bassa, Liberia, and lived there until a second wave of civil war finally pushed her family to move to the United States in 2002 when she was 12 years old.

?I knew that my move to the U.S. was not permanent,? she said. ?It was an opportunity for me to acquire knowledge that will enable me to make a difference in the world, but more specifically, Liberia.?

After earning a bachelor?s degree in public health from IU in 2011, Gongloe drafted a proposal to study infection-control practices in rural hospitals in Liberia. Her plan was accepted, but after just eight months working there, she knew she needed to strengthen her knowledge. So she returned to Bloomington, where she earned a dual master?s degrees in public health and school and college health education.

This summer, Gongloe returned to Liberia as the Ebola outbreak was starting. As the epidemic spread, she got to work.

?I volunteered with the social mobilization committee of the task force at the Ministry of Health,? she explained. 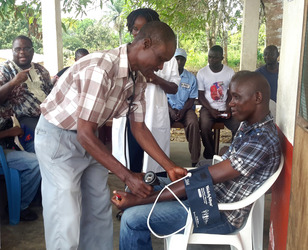 First, she was assigned as a field monitor in Monrovia, the capital city on the Liberian coast, then she became a technical advisor in the rural area of Nimba. In those roles, Gongloe collected daily reports and provided them to zone supervisors, noting newly reported cases of Ebola.

With responsibility for six zones in the country, she visited contacts in each weekly to verify information had been reported correctly.

?At the beginning of the Ebola outbreak, it was very challenging dealing with families and communities that were in denial and did not trust the government,? she said. ?However, as the outbreak peaked and communities began to organize themselves into task forces, [it] started to take a downward trend in Monrovia.?

Feelings of fear due to the virus and skepticism of the government were soon supplanted by a communal sense that challenges could be overcome if people were willing to work together.

?This was the first time that I had seen Liberians fight for a common cause, and it reminded me of why I decided to come home and be a part of change in this country,? Gongloe said.

Fighting an epidemic like Ebola is an overwhelming responsibility. When Time magazine named the Ebola response workers as their Person of the Year for 2014, Gongloe was appreciative of the acknowledgement and suggested it provided a much-needed morale boost.

[btn-post-package]?I was honored that Time magazine could acknowledge the sacrifice that many of our health workers, including myself, made to save ourselves, our families and entire communities,? she said. ?It was good that Time magazine did not name specific individuals because there were many ?unknown soldiers? during this fight against Ebola who may not have been acknowledged and may have felt discouraged. The collective recognition will encourage all health workers to keep fighting because their work will not go unnoticed.?

While the Ebola outbreak is hardly over, recent reports from scientific journals and the World Health Organization indicate the number of new cases is declining, giving a Gongloe a break from being active in the field since December.

Her focus now is on Liberian children returning to school in February - the first time since the Ebola outbreak began.

?I hope to assist in developing plans for school health and implementing them in schools as this has been one of my passions for years,? Gongloe said. ?I look forward to seeing a better health system and … school health programs in Liberia so that one day my future children can also benefit from my work.?