One question facing every Big Ten football team this offseason 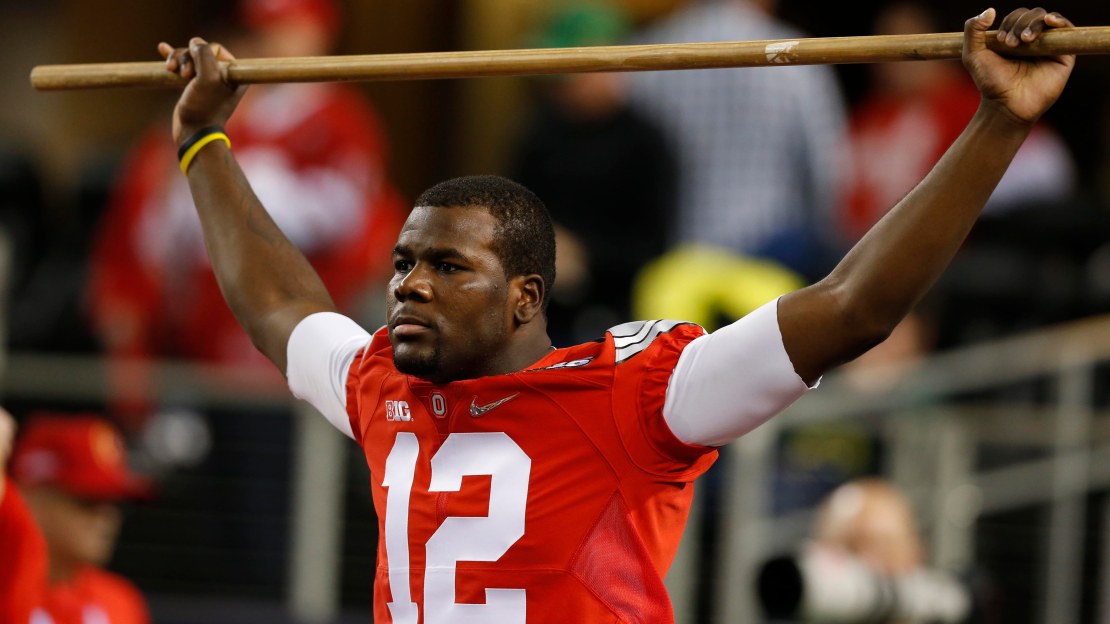 It's official: The 2014 college football season is a wrap.

With that said, how about we take an early look ahead to next season?

The Big Ten had an outstanding finish to the season, capped by Ohio State's memorable run that ended with its eight national championship.

While expectations will be high for the Big Ten heading into the 2015 season, there are still plenty of questions surrounding the 14 conference teams.

I got together with BTN.com senior writer Tom Dienhart to come up with one burning question facing every Big Ten team heading into next season.

Illinois: Will the defense improve?

This unit was last in the Big Ten in scoring defense (34.0 ppg) and last in total defense (456.4 ypg). More playmakers are needed, especially up front, if the Illini want to take the next step in their development. – Tom Dienhart

Indiana: How do the Hoosiers replace Tevin Coleman's production?

Simple answer here… They don't. It would be near impossible for an Indiana running back to match the numbers Coleman put up last season in Bloomington, right? Well, the Hoosiers received some great news when former UAB standout running back Jordan Howard announced he will transfer to IU. The 2014 First-Team Conference USA back rushed rushed for 1,587 yards and 13 touchdowns last season. Because UAB?s program shut down, Howard is immediately eligible to play in 2015. – Sean Merriman

Iowa: Who will start more games at quarterback in 2015: C.J. Beathard or Jake Rudock?

Merriman: This was an ongoing debate throughout this season, and with both Beathard and Rudock expected to be back in Iowa City next year, the debate will continue. Iowa coach Kirk Ferentz recently released the Hawkeyes' depth chart as the team prepares for the offseason. It looks like Beathard is listed as the first-string quarterback, while Rudock, a two-year starter, is listed as the second-string QB. Will this last? We will see. – Merriman

Maryland: What will happen at linebacker?

The Terps lost some good players in Cole Farrand, L.A. Goree, and Yannik Cudjoe-Virgil. This is a Maryland defense that allowed more than 30 points per game last season, which ranked near the bottom of the Big Ten. Who will be the playmakers on this defense in 2015? – Dienhart

Michigan: What type of improvement will we see with this team in the first year of the Jim Harbaugh era?

Michigan fans received their wish. Jim Harbaugh is the new head man in Ann Arbor, and now the question becomes, when will we start seeing the results play out on the field? The Wolverines had a truly disappointing 2014 campaign, finishing the season 5-7 and missing out on a bowl game. Now, with Harbaugh at the helm, will things begin to change drastically? Harbaugh has the reputation as being one of the top coaches around, but the lack of talent development over the past couple of seasons remains a major concern for this football program. Will a 7-or-8 win season in the first year of the Harbaugh era be considered a positive? – Merriman

Michigan State: Will the Spartans' defense fall off in 2015 with the departure of Pat Narduzzi?

Michigan State's defense has been among the top defensive units in the nation over the past couple of seasons. The mastermind behind that dominant defense was Narduzzi, who came over with Mark Dantonio from Cincinnati in 2007. Now, Narduzzi is off to Pitt to become the Panthers' head coach. Former defensive back coach Harlon Barnett and linebackers coach Mike Tressel have been promoted to co-defensive coordinators. With guys like Shilique Calhoun, Lawrence Thomas and Ed Davis returning in 2015, there's no doubt there is still plenty of talent remaining, which should lead to another successful season. – Merriman

Minnesota: With both David Cobb and Maxx Williams off to the NFL, where will the Gophers' offensive production come from?

Nobody would have mistaken the Gophers for the Green Bay Packers in 2014. This is an offense that averaged 28 points per game last season, which ranked 69th in the nation. But think about this: Cobb and Williams combined to account for 51 percent of the Gophers' offensive yardage in 2014. Berkley Edwards is the team's top returning rusher (30-140-2), while KJ Maye is the team's top returning pass-catcher (16-298-1). – Merriman

Nebraska: Will new head coach Mike Riley be able to lift the Huskers over the 9-or-10 win mark in his first season in Lincoln?

A new era begins in Lincoln this season as Bo Pelini is out after seven seasons as the Huskers' head coach. Enter Mike Riley, who totaled 14 seasons as the head coach at Oregon State. Pelini was a model of consistency during his time at Nebraska, posting nine or 10 wins in every year he was there. However, he was never able to top that mark and lead his team to a Big Ten Championship victory. Will that change in Riley's first year on campus? We will see. – Merriman

Northwestern: Will the Wildcats get better play at quarterback?

This attack became too easy to defend last year. It needs better balance, which would come from an improved passing game with Trevor Siemian gone. Zack Oliver, Matt Alviti and Clayton Thorson are all candidates to take over the starting quarterback reigns in Evanston next season. The Wildcats haven't had a quarterback throw for more than 2,500 yards in a season since Dan Persa did it back in 2010. – Dienhart

Ohio State: Who will be the Buckeyes' starting quarterback when they take the field on Sept. 7 against Virginia Tech?

This is one of the biggest questions heading into the 2015 season. Braxton Miller is a two-time Silver Football winner, but he is coming off a season-ending shoulder injury that cost him all of 2014. J.T. Barrett was the first-team All-Big Ten quarterback and a legitimate Heisman Trophy candidate last year, but he is rehabbing from a fractured right ankle he suffered in the regular season finale against Michigan. Cardale Jones is an incredible story, taking over the gig in the Big Ten title games and delivering wins vs. Wisconsin in Indy, the Sugar Bowl vs. Alabama and the national championship vs. Oregon. This will be one offseason story that college football fans across the nation will be keeping an eye on. – Merriman

This was a sore spot all season. This unit took another hit when its best player-tackle Donovan Smith-turned pro. Quarterback Christian Hackenberg was often running for his life behind a bad line in 2014. In addition to a poor offensive line, the rush game struggled last season. The big boys up front must improve if Penn State is going to compete in the Big Ten East this year. – Dienhart

Purdue: Who will make plays on offense?

This was an often pedestrian offense last year with Akeem Hunt and Raheem Mostert leading the way. Purdue ranked 11th in the Big Ten in total offense last season, averaging just over 344 yards per game. Now, both Hunt and Mostert are gone. Those two combined for 1,478 of the Boilermaker's 1,886 rushing yards in 2014. Who will inject speed and go-the-distance ability? – Dienhart

The Scarlet Knights are loaded at running back, but this offense needs a passing game. Nova set the school record for most career touchdown passes with 73. There is no question, his departure leaves a big hole. Chris Laviano and LSU transfer Hayden Rettig are in the mix to replace Nova as the Scarlet Knights' signal caller, but who will ultimately secure that job? – Dienhart

Wisconsin: Will the passing game improve?

Joel Stave is back and appears to be the man with Tanner McEvoy making the move back to safety. The Badgers ranked No. 12 in the Big Ten in passing last year (148.7 ypg). We know the run game will be there, but this team's lack of a passing game was more than obvious in the Badgers' 59-0 loss to Ohio State in the Big Ten championship game. – Dienhart