Aaron White Q&A: 'I am trying to play to my strengths' 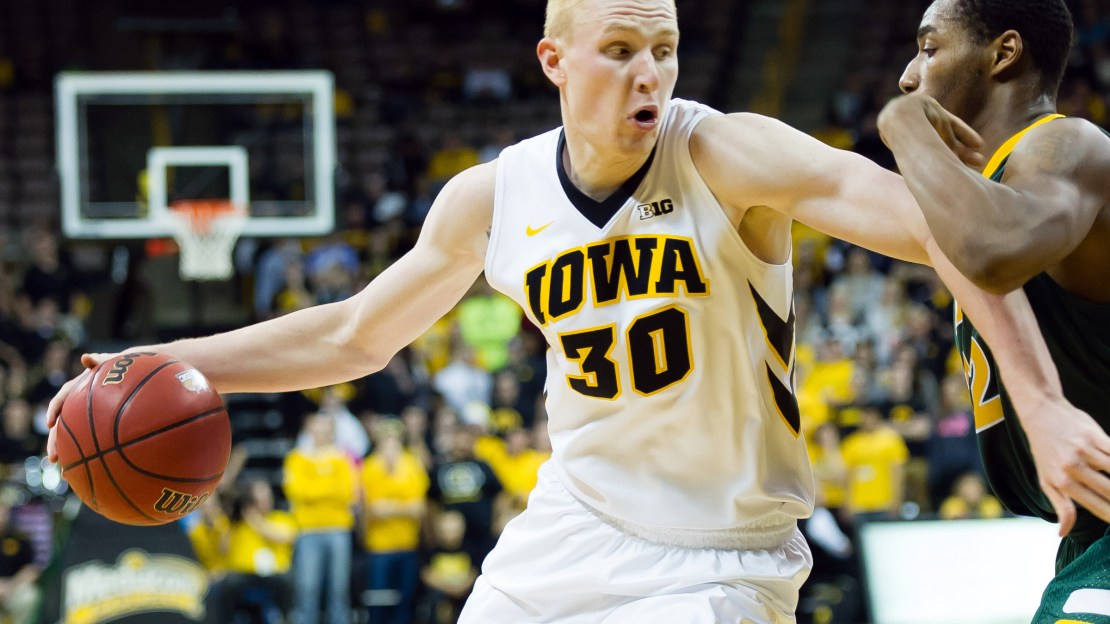 It's all right there for Iowa: A shot to win the Big Ten title.

It has been a while since the Hawkeyes have won a regular-season championship. You have to go back to the 1978-79 season.

"It has been that long," said White, when informed of the 36-year drought.

I caught up with the Strongsville, Ohio, native as Iowa (12-5 overall, 3-1 Big Ten) prepped to play host to Ohio State on Saturday.

Q: You are an Ohio native. Did you watch the Buckeyes in the national title game beat Oregon on Monday night?

A: I caught the end of it. We were in Minnesota, out to dinner.

Q: Did you care if Ohio State won or not?

A: No, I really didn't. I had Buckeye fans all around me when I was growing up. But I wasn't a real big fan.

Q: What have you improved at this season?

A: I think I have been playing to my strengths. Instead of trying to prove everyone wrong and trying to do stuff I may not excel at, I have focused on doing what I do well and not playing outside myself. In my case, it's rebounding and running the floor, being active, scoring in a number of ways. I am trying to play to my strengths and with the confidence that I'm one of the best players in the conference and the country.

Q: Has anybody on the team surprised you?

A: Not me. But on a national level, I think people are surprised by Jarrod (Uthoff). He wasn't as big a focal point last year as he is this year. Everyone on our team knows how talented he is and how much he can bring to the team, but he didn't have an opportunity last year. And now he does. He has been playing well lately and is a really talented kid.

Q: What would it mean if your team could end Iowa's long Big Ten regular-season championship drought?

A: It would be amazing. When I came here, it was a big goal. We have made progress in recent years. It's kind of the next step forward, to compete for the Big Ten championship.

Q: You guys have three true road wins this year-at North Carolina, at Ohio State, at Minnesota. How big is that victory in Chapel Hill?

A: It was big. We were really challenged in the non-conference. We played a lot of tough teams. It was big at the time and we needed a big win at the time. And it was good for our confidence to know we can go on the road and win a game like that.

Q: Was it sweeter for you, being an Ohio guy, to win at Ohio State?

A: We won there last year, too. It's always great to go home and get a win, especially being from there and about a hour-and-half from Columbus, so I had a lot of family there. It is great to see your family. It's even better to see them and win and hang out a bit afterward.

Q: On the team bus, who do you wanna sit by?

A: Probably Gabe Olaseni. He's my roommate and pretty much my best friend on the team. We have the same type of personality. That's my guy to be around.

Q: What is the best movie you saw recently?

A: I liked the "Hunger Games" movies and saw the new one. But I'm kinda mad it's just half the story. Now we have to wait another year or so to see the second half.

Q: What is your favorite class?

A: I'm in rec and sports business. So I like to learn the behind-the-scenes stuff about sports, sports management, event management. Stuff like that.

Q: Where is the best place to get a hamburger in Iowa City?

A: The Hamburg Inn in downtown. It's a breakfast spot, but they have good burgers, too.

Q: What has been your biggest moment as a Hawkeye?

Q: Can you tell when Fran McCaffery is about to blow his top?

A: Yes, I can now. At the beginning I couldn't. Now, I can. A lot of it has to do with the direction of the game and momentum. If we aren't doing what we are capable of doing, or things aren't going our way ?

Q: What is your most memorable episode of watching "Mount Fran" erupt?

A: It has to be the game at Michigan State my freshman year when he slammed the chair. We were getting smacked at the time by Michigan State. But looking back, it was kinda funny. It has been blown out of proportion a bit.