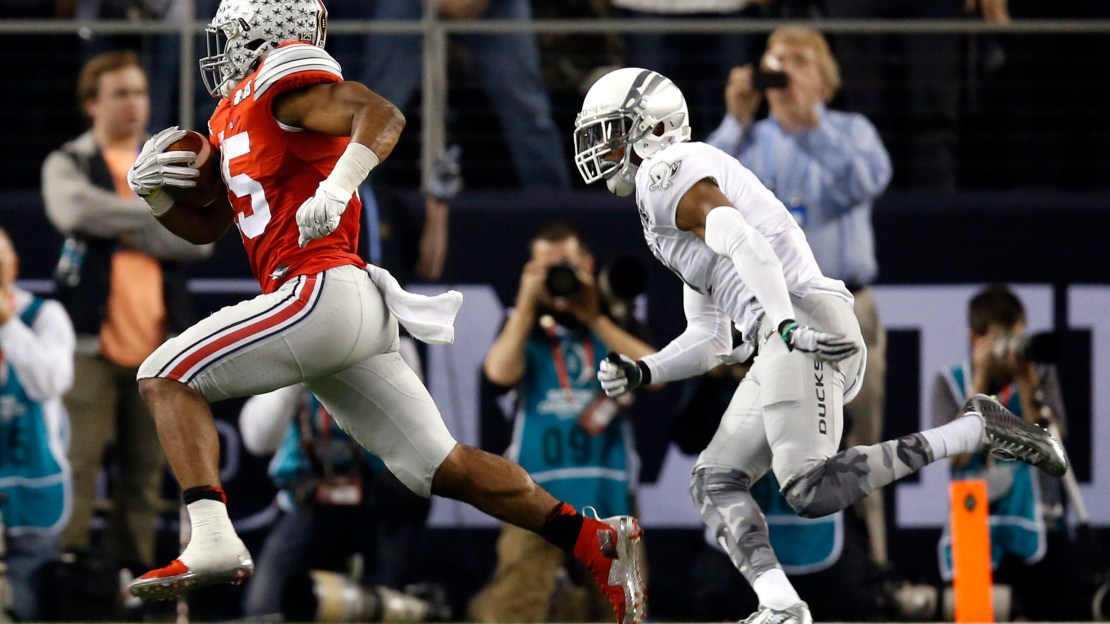 Now that the last pieces of confetti have been swept up in Cowboys Stadium, it?s time to turn the page to 2015. This is the official beginning of "Speculation Season." And, it?s a most wonderful time of year.

Everyone is 0-0 ? everyone soon will sign a recruiting class that fills every need ? possibilities will seem endless from Lincoln to Piscataway.

With that, let?s take an early look at how the Big Ten race could shape up in 2015. First up, the rugged Big Ten East. Is this college football?s new ?monster division?? Maybe.

The Good: The Buckeyes should be the preseason No. 1 team in the nation. There are no real personnel shortcomings. Try to poke a hole in this roster. You can't. This is a living, breathing juggernaut led on offense by RB Ezekiel Elliott and a veteran o-line. DE Joey Bosa sets the tone on a defense that is loaded with studs in the back seven, including LB Darron Lee and safeties Vonn Bell and Tyvis Powell.

The Bad: There isn?t much. Ohio State?s biggest foe could be itself. Can this team stay hungry and motivated amid rampant success? And how will the quarterback spot play out? Could it be divisive? Depth at wideout is needed with Devin Smith and Evan Spencer gone. DT Michael Bennett also has left the building.

The Good: The Spartans have won double-digit games four times in the last five years. Mark Dantonio has this program humming. The play in the trenches should be among the best in the Big Ten. QB Connor Cook is back, along with some nice pass catchers. The defense suffered some attrition but still has talent with the likes of DE Shilique Calhoun surprising some and opting to return to school for the No. 1 rush defense in the nation.

The Bad: How will the defense be impacted by the loss of coordinator Pat Narduzzi, the new coach at Pitt? The production of RB Jeremy Langford and WR Tony Lippett will be missed. The defense saw CB Trae Waynes turn pro. LB Taiwan Jones and DE Marcus Rush also are gone.

The Good: QB Christian Hackenberg should be better after grinding through an often tumultuous sophomore season. He has an exciting corps of receivers led by DaeSean Hamilton. A strong defense has some cornerstones in defensive tackles Austin Johnson and Anthony Zettel and CB Jordan Lucas.

The Bad: The offensive line has a lot to prove, needing to develop across the board. And the best o-lineman-T Donovan Smith-turned pro along with TE Jesse James. Running backs Bill Belton and Zack Zwinak also are gone. The defense suffered some big losses: LB Mike Hull, S Adrian Amos and E C.J. Olaniyan. Fellow DE Deion Barnes turned pro for the No. 3 rush defense in America.

The Good: The arrival of Jim Harbaugh has fans jacked out of their mind. The possibilities seem endless. Even with LB Jake Ryan gone, there is plenty of talent to work with, including CB Blake Countess, on what was a good defense last year.

The Bad: The quarterback slot needs to be solidified after recent tumult and spotty production. And a long-suffering offensive line needs to develop. Is there a top-flight running back in the house? And who will be the go-to wideout with Devin Funchess off early to the NFL?

The Good: The Scarlet Knights will have another strong defense with DT Darius Hamilton back. And DE Kemoko Turay looks like a future star. There is nice depth at running back with youngsters Josh Hicks and Robert Martin back. Plus, Paul James returns after tearing an ACL last year.

The Bad: Who will replace QB Gary Nova? LSU transfer Hayden Rettig and Chris Laviano are in the hunt. The return of WR Leonte Carroo will be a boon to the new quarterback. Can Andre Patton become a top No. 2 man? The o-line needs better depth and must replace three starters. TE Tyler Kroft turned pro.

The Good: Brandon Ross and Wes Brown are two nice running backs. CB Will Likely is back for what should be a strong secondary. Caleb Rowe is a vet who figures to start at quarterback but is coming off injury. WR Marcus Leak is a solid wideout along with the Jacobs? brothers, Levern and Taivon.

The Bad: Some big holes to fill on offense with QB C.J. Brown and WRs Stefon Diggs and Deon Long gone along with three linemen. Three new linebackers are needed on a front seven that loses six starters. The d-line has some big holes, too, with Andre Monroe the top loss. He brought the heat.

The Good: UAB transfer Jordan Howard should have a just-add-water impact for an offense that needs a running back. He?ll work behind a veteran line that continues to get more physical. The quarterback spot welcomes back Nate Sudfeld from injury.

The Bad: Star RB Tevin Coleman is off early to the NFL after a 2,000-yard rushing season. More playmaking is needed at wideout. The defense needs an edge, especially vs. the run. An athletic linebacking corps offers hope. Can a winning attitude be developed?